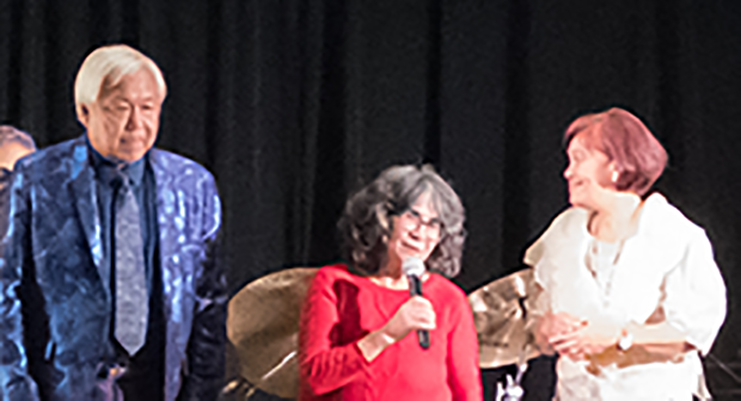 This year, what felt to those involved as a miracle occurred. Senator Bob Hasegawa encouragd Kuya Rey to go for a bill, not a resolution, to establish October as FAHM forever.

It was a nail-biting historical moment. There was only time to pull five bills from a big stack, and the last bill Majority House Leader Frank Chopp pulled was the FAHM bill — SB 5865. The bill passed quickly with unanimous votes in the House and the Senate. From now on, the month of October will be forever Filipino American History Month in Washington state.

FAHM celebrates Filipino American identity, history and brown brilliance that contributes to self healing and sharing with others. This article features the life-long achievements of Filipino American artist Lynda Barry and long-time community leader and executive director of International Community Health Services Teresita Batayola, while recognizing further brilliance in the pipeline within the community.

Lynda Barry, red-headed, quarter Ilocana graphic novelist, cartoonist and educator. Barry is a 2019 MacArthur Fellow honored for her creativity, life’s work and mentorship. Commonly known as a Genius award, the fellowship comes with a no-strings attached $625,000 awarded over five years.

Barry was born in Wisconsin and her mother moved the family to the Central District neighborhood in Seattle, working class at that time, to live with her Ilocana grandmother.

As she recalled, her childhood was difficult and awkward with intense emotions of adolescence, and this is reflected in her body of work.

In 1977, Barry’s career launched when fellow Evergreen State College cartoonist and school newspaper editor Matt Groening (creator of The Simpsons, Futurama and Disenchanted) and John Keister (host of Almost Live TV show), UW Daily editor, published her letters to the editor with her drawings. These were then compiled to become her break out book Ernie Pook’s Comeek.

At 23, Barry made a living as a cartoonist when the Chicago Reader picked up her comic strip. Throughout her 35-year career, she used humor with children and women’s perspectives to confront race, sexuality and abuse in this male dominated industry. By 1989, Barry’s work appeared weekly in more than 50 publications, mostly alternative newspapers in large cities.

Barry has penned and drawn 19 graphic novels. Her seminal work, The Good Times Are Killing Me, was adapted into an off-Broadway play with Obie and Theatre World Awards for cast members in various productions. Barry herself was nominated for the 1992 Outer Critic Circle’s John Gassner Award. A darling of the media, she appeared many times on David Letterman’s Tonight show, sharing stories of her grandma smoking cigarettes with the lit end in her mouth, and scaring her to clean her room with “aswang” (shape shifting vampires), told with a full-blown Filipino accent.

Affiliated with the University of Wisconsin, Madison, since 2012, she currently serves as Associate Professor of Interdisciplinary Creativity in the Department of Art. Barry’s new book Making Comics will be published this November.

Teresita Batayola, immigrant, half Ilonga and half Tagalog dynamo. Batayola will be recognized under the “Builder” award category as one of the most influential Filipinas by the Filipina Women’s Network (FWN) at the 16th Filipina Leadership Global Summit this October in Paris France. The Builder Award recognizes Filipinas who made exceptional organizational impact in large workplaces, with deep passion for a cause, through collaboration with institutions, alliances and non and for-profit organizations.

Batayola has led the International Community Health Services (ICHS) since 2005. She uses her strategic, community and economic development skills to navigate national and local health care politics, as well as the most recent recession to ensure accessible and affordable health care for multicultural and multilingual Asian Pacific Islander (API), African and other diverse populations. Batayola successfully transitioned ICHS from serving APIs in Seattle’s Chinatown and Beacon Hill to also serving APIs and other immigrant and refugee groups in the Bellevue and Shoreline.

In 2018, ICHS served 31, 841 patients with 81% persons of color, 53% needing interpretation services in 50 + languages and 3 out of 4 are persons with low income. ICHS provided more than one million dollars of uncompensated care.

Other awards and recognition she has received include: 2010 Seattle Business Magazine leaders in Health Care, 2014 White House “Champion of Change” award for health care education re the complicated national Affordable Care Act (ACA), and 2017 UW Women’s Center Women of Courage award. Board service includes board chair/president of the national Association of Asian Pacific Community Health Organization, Seattle College Board of Trustees, and WA Association of Community and Migrant Health Centers.

Brilliance in the pipeline

This article would be incomplete without giving a big nod to the brilliance of our local brown leaders. Chera Amlag is a 2019 International Examiner Community Voice Awardee, owner of the successful Hood Famous Bakery and Hood Famous Cafe + Bar, and creator of its signature ube purple yam and uniquely Filipino flavored cheesecakes. She jumpstarted the Filipino cuisine renaissance along with other brown chefs across the nation. Jill Mangalinan, executive director of Got Green and their team successfully organized and collaborated with many organizations on the unanimous passage of the Green New Deal. And Heather Villanueva, who received the 2019 Community Spirit from Sen. Rebecca Saldana, is a consummate connector and labor organizer. Villanueva connects us to our hearts with music and art.

Eyes will also be on Leo Flor, the newly appointed King County Director of Human Services who will lead the integration of King County and the City of Seattle’s services to the homeless, and on Manny Cawaling as he leads Cultural Access Washington in times of competing resources. Onwards and forwards with brown brilliance.