“When I came here what I thought I was going to teach in North Carolina, but I ended up jobless. I arrived in Washington DC, and I wondered why,” recalled Fen Ecelo, a professional teacher back in the Philippines, recruited by Philippines-based recruitment agencies associated with Isidro Rodriguez. Upon arrival to the United States, she learned her job did not exist.

Over 300 teachers from the Philippines were lured to the United States by recruiter Rodriguez with promised H-1B specialty occupation U.S. visas and teaching jobs paying USD$27-30 per hour and housing provided. The teachers, majority women, found themselves in Washington, D.C., in substantial housing with up to 12 women cramped in a bedroom. Some of them were placed in day care centers, where they experienced low wages, overwork, and discrimination.

Ecelo is now the Co-Chair of the newest GABRIELA-USA chapter in Washington, D.C., formed in October 2013. GABRIELA is a women’s organization that works for the human rights of Filipino women globally; there are GABRIELA chapters in New York, San Francisco, Los Angeles, Chicago, and Seattle. The new Washington DC chapter has 50 members, majority of who are trafficked teachers.

The trafficked women sought help from GABRIELA in 2012, and since community organizers have been working with the women and their families back in the Philippines, letting them of know the immigration laws and their rights. Several teachers have applied for T-Visas and began a campaign against Rodriguez.

When the trafficked teachers began to speak out, movement back home also started to happen. Coordinating with MIGRANTE International, an organization that advocates for Overseas Filipino Workers—and together with the families of the trafficked teachers who had filed petitions, GABRIELA filed a human trafficking case against Isidro Rodriguez through the Inter-Agency Council Against Human Trafficking in the Philippines.

What was learned from the case was that the teachers were made to pay recruitment fees which included “surprise fees” (an estimated USD$20,000) and forced to take out loans from finance agencies associated with Rodriguez. Additionally, the teachers reported that he had threatened them with deportation or killing their family back in the Philippines if they spoke out. He sexually harassed several of the women, while their mobility was also monitored and restricted.

According to GABRIELA and MIGRANTE, the use of coercion, fraud, and force has made this a clear case of human trafficking by Isidro Rodriguez, and they are calling for full reparations and compensation for the trafficked teachers, as well as Rodriguez to be prosecuted.

The Rodriguez case has also allowed a platform for vocal criticism of Labor Export Policy, created under the Marcos regime in 1970s that opened the floodgates of Filipinos to leave the Philippines for work and send home remittance, rather than develop the local economy and conditions to allow Filipinos to thrive in their homeland.

Touted as “Modern-Day Heroes,” Overseas Filipino Workers (OFWs) are not afforded protections by the Philippine government and are often victims of human trafficking, exploitation, and sexual harassment and violence. Almost 5,000 Filipino migrants leave the Philippines every day for work, 75 PERCENT of whom are women.

On March 17, GABRIELA USA launched their Justice for Filipino Teachers campaign by hosting a press conference in Washington, D.C., calling for fair and just reparations, the cancellation of any debts owed from lenders conspiring with Rodriguez’s operation, as well as immigration relief.

GABRIELA USA chose March 17 as their national day of action because it is also Flor Contemplacion Day, a day of remembrance for Flor Contemplacion, a domestic worker framed for murder by her employer and hung by the Singaporean government.

In New York, San Francisco, and Los Angeles, GABRIELA Chapters put on actions at their local Philippine Embassy and Consulate on March 17 to support the trafficked teachers in DC. In Seattle, there was an online selfie campaign, including a photo booth set up for supporters at local Filipino restaurant, Inay’s Kitchen, during the monthly pop-up restaurant, Food & Sh*t.

After the traumatic experiences at the hands of Rodriguez, leaving them without work, in high debt and in vulnerable immigration situations, the trafficked teachers remain strong. Surrounded by an international network and the People’s movement in the Philippines, they are speaking out and seeking justice on behalf of all trafficked victims, bringing to light the corruption in recruitment schemes like Rodriguez and the Philippine government, which has allowed these exploitive conditions to happen. 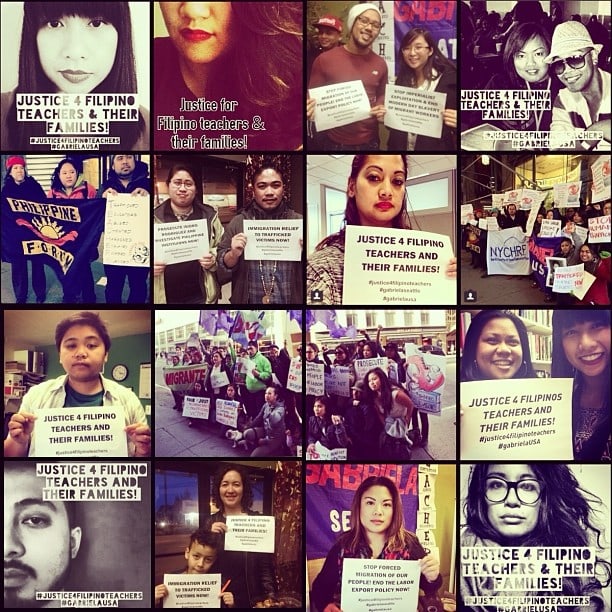 Editor’s note (12:19 p.m. on 4/19/2014): The story has been edited to correct an error. The teachers had in fact not obtained T-Visas but applied for them and they are not proceeding with cases with USDOJ and USICS (only with the case in the Philippines).