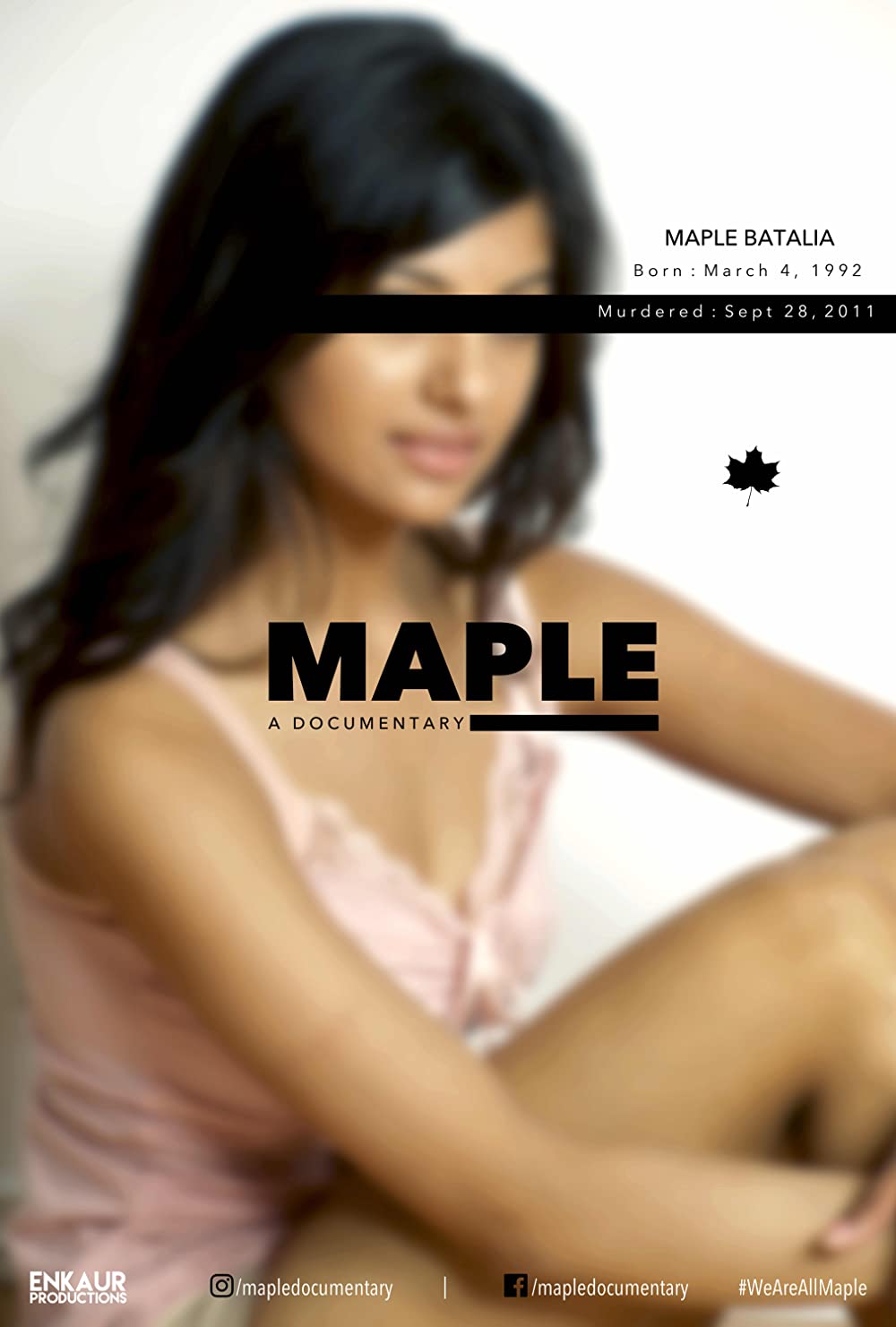 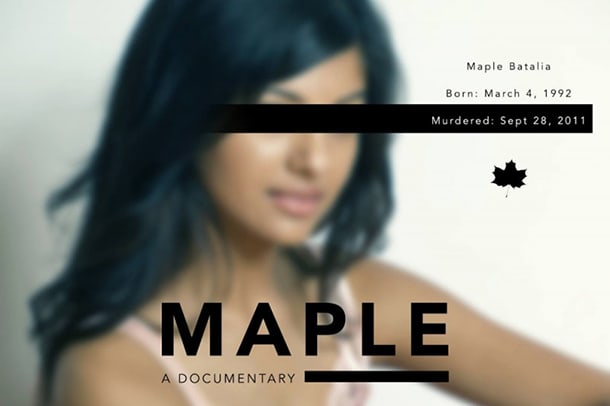 The following are statements from directors whose films are featured at this year’s Tasveer South Asian Film Festival.

I never met Maple Batalia, but she lived close by and was born on the exact same day as me: March 4, 1992.

I remember the morning I found out that she had been killed. I had opened my laptop and was scrolling through, only to find an article about the homicide that had occurred at SFU that night. Alone in my room, I remember yelling “no!” at my laptop.

How does something like this happen? How does a 19-year-old girl who would never hurt a fly and had so much going for her, just be murdered?

I wanted to use my education and experience to figure out a way to shed light on this issue and help in any way I could. I contacted Maple’s sister, Roseleen Batalia, and told her that I wanted to do a documentary about her sister. She was completely supportive of any initiative that would raise awareness about the type of horrendous violence that killed her sister, so I got to work.

I spent the next five years obsessively following the case, learning everything I possibly could. When I graduated with my film degree in 2016, I knew I wanted to do something that related to Maple’s case.

I want this documentary to tell Maple’s story, about who she truly was, and not just who the media portrayed her to be. When talking to her best friends, they told me a story about a girl who didn’t like attention, who was generous and kind, and would drop everything if she knew that someone needed her. I want to tell that girl’s story.

I want people to see the type of impact this type of tragedy can have on not just family and friends of victims, but to the community around them. This type of violence cannot be tolerated. Maple was like a daughter to so many, she was like a sister, a friend; the list goes on. It could have happened to any one of us, which is why we have to stand together and make a stand for what’s right. #WeAreAllMaple 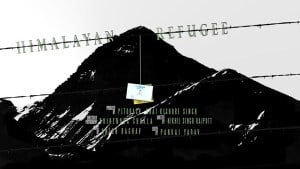 As a documentary filmmaker, immigrants and asylum seekers are the biggest subject in our political discourse. Religious persecution and sectarian violence have always contributed to exodus. There is a serious theological difference of opinion, especially in the interpretation of the Holy Quran and Hadith in light of Muslim sects other than Shias and Sunnis. Ahmaddiya is a 19th century Muslim sect originated in Punjab and has now migrated to 196 countries.

Pakistan as a state is inflicted with sectarian violence. There is a history of sectarian violence, especially against the Ahmadis! But an asylum seeking Ahmadi seeking asylum in the poorest of country is fraught with hardships.

In the current climate of scepticism it was important to present individual stories of refugees currently granted asylum by UNHCR Nepal along with relevant papers, newspaper cuttings, and photographs.

The political instability of Nepal and the economic burden of asylum seekers in poor Nepal finds a global resonance. Skepticism over asylum seekers in light of Nepal’s history as a land used to target India by Islamic terrorists forms a backdrop for institutional apathy towards Pakistani Ahmadis.

[The issue of] huge fines (often in millions) for overstaying on Visa in Nepal is discussed and we try to figure out a way to bypass this unique injustice in a legally accepted manner. Unless this fine is waved refugees can not be resettled in a foreign country by UNHCR.

Whatever the political or theological background of refugees it is hard to not empathise with the current situation of this group. As a filmmaker it is especially important to present unpopular opinion in a balanced but compassionate way. 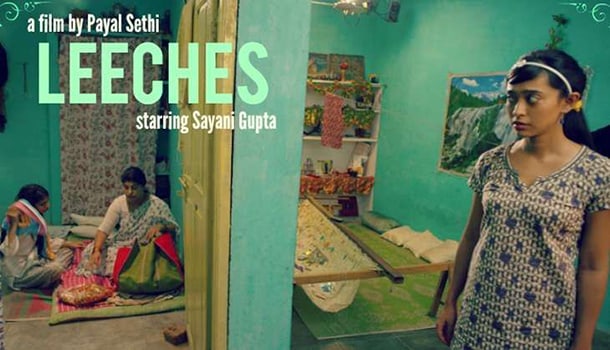 Officially, India is a developing country, but the reality of existence for the underbelly of the population that lives below the poverty line is very much a third-world one.

Leeches portrays the practice of contract marriages in communities who live in one of the fastest growing cities in India but are unable to participate in any meaningful way in it’s economic boom. I came across this practice while living in the city two years ago, thereafter researching the facts through Shaheen, an NGO that helps girls who run away from such arrangements.

On the cusp of destitution, desperate measures are often the only ones available. The system of “one-day-brides,” which is one such measure, offers the fig leaf of religious sanction to a clear case of sexual slavery. Thus, in Hyderabad’s old city, rich businessmen prey on the virginity of underage girls in an archaic tradition that is still propagated under the auspices of Sharia marriage laws. These men take brides for short periods, sometimes just a night, with rates varying according to the duration of the marriage. An intricate web of opportunists facilitates this flesh trade, including many clerics, who service clients with a predilection for teenage-virgin brides.

In the absence of records, it is impossible to find out the extent of the practice, yet the press stories of the individuals compelled me to explore the ways in which young women might react and rebel in these oppressive circumstances. Raisa, the protagonist, represents the courage and spirit of a small percentage of girls who refuse to accept these sham marriages as their fate. This film is for them. 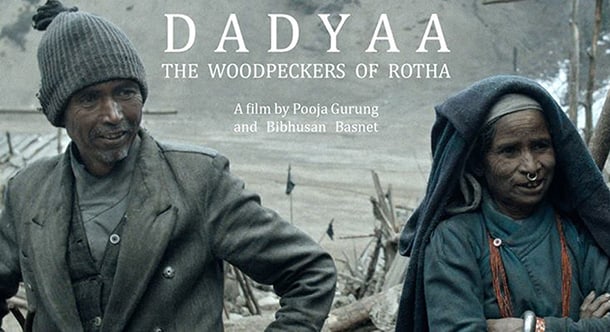 Why create anything when everything ends as dust and grime? Is it for the sake of remembrance? Is it for the immortality of the subject or the “artist” itself? Or for the hope that our “work of art” will one day come alive and lift our souls from this mess of life? “Dadyaa” started out as an exercise to test these very themes around an old couple in the highlands of Jumla. But once again, life happened and the wonderful mess around it helped us as directors to draw parallels between our fictious world and the reality that exists in remote Nepal.

When Anuk Arudpragasam (author of The Story of a Brief Marriage) told me about a short story he was writing, I was instantly interested by its mood and setting—something that was surreal and otherworldly, but rooted in the barren farmlands of the Sri Lankan south.

This story is set in the harsh and often fatal world of Sri Lankan farmers. In the 1990s, the Sri Lankan suicide rate doubled the global average, and most of the people taking their own lives were farmers receiving little to no help from the government. Unable to feed their families, many farmers in Sri Lanka turn to alcohol as a means of dulling the sharp misery of their poverty.

The story of The Joyous Farmer is influenced by the Russian writers of Soviet-era alternative fiction, like Andrey Platonov and Sigizmund Krzhizhanovsky. These stories root themselves in the real world at first, but then unwind themselves from reality, materially and psychologically.

The Joyous Farmer also deals with the complexities of intoxication and addiction. The film draws a parallel between the necessity of self-numbing in the so-called third world with the first world’s increasing dependence on designer pharmaceuticals to deal with the pressures of everyday life.

Visually, I looked to films that are firmly based in reality but maintain a dream-like quality at the same time. Specifically, I looked to the 1971 Australian film Wake in Fright. Its portrayal of the Australian outback’s scorched earth and poverty-stricken communities served as visual inspiration for The Joyous Farmer. … The film is primarily driven by a visceral, physical performance by rising star Arun Welandawe-Prematilleke, couched beautifully by the accomplished cinematography of Dino Dimopoulos. … I am lucky and feel blessed to have worked with these artists on my first short film.