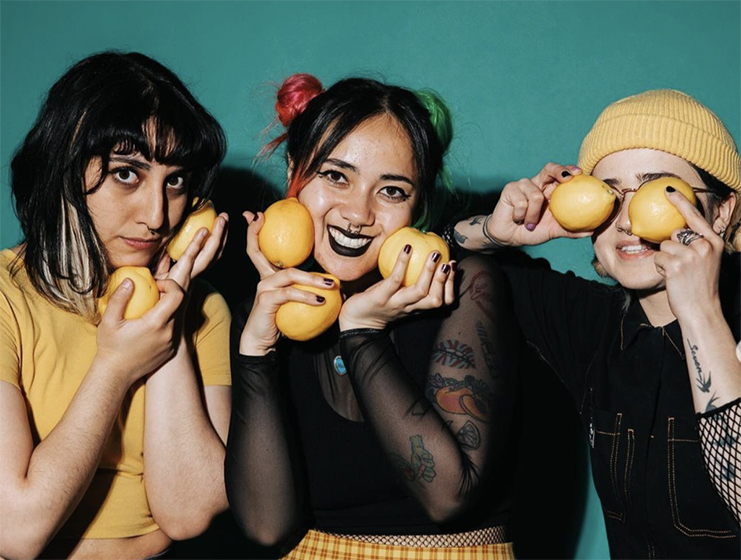 Local Capitol Hill venue Café Racer recently hosted the So Dreamy Music Festival on June 4 and 5, and one band in the lineup was Lemon Boy, a trio of three women who bill themselves as an “all-girl boy band.” The musicians include guitarist Yasiman “Yaz” Ahsani, bassist Nicole Giusti, and drummer Myriah Hernandez-Charbeneau, who combine a range of influences from pop to rock to punk.

The group was thrilled to participate in the event. “It was an incredible experience, and we were honored to be included at the very first So Dreamy festival, which highlights QTPOC artists in Seattle!” Giusti said. “It was surreal to share the stage with so many talented musicians that we admire so much!”

It was especially meaningful since Lemon Boy formed only a year ago. “We know personally how intimidating it can be to try to break into a tight-knit, predominantly white and male space,” Giusti said. “So Dreamy taught us that there’s a really supportive community of QTPOC musicians in the city and how welcoming the music scene can be when you find the right people.”

Ahsani reports that, in 2019, she had moved to Seattle, in the hopes of starting a riot grrrl band. “I had recently had my third unsuccessful attempt at starting a ska band,” Giusti added. “Myriah had just started studying music production and wanted to hone her drumming skills.”

A year later, they met and became inseparable. “Fate brought the three of us together at the Southgate Roller Rink, and we spent the summer of 2020 shredding at Seattle skateparks, while we couldn’t play music together indoors due to our precautions for COVID,” Giusti recounted. “After emerging from quarantine in 2021, vaxxed and ready to play, the three of us started practicing regularly in the depths of a hidden basement in the historical grunge district of Seattle [Pioneer Square].”

For all three, music has been in their bones since childhood. “My mom had a daf, setar, and tanbur that she brought from Iran,” Ahsani said. “I remember her opening the cases and showing me how to hold each of them. As I got older, I went back to revisit learning how to play them.”

Giusti’s introduction to music was more pop-oriented. “My earliest memory of music is listening to Britney Spears’s album Oops!… I Did It Again on repeat when I was in elementary school,” she recalled. “I even performed the song ‘Lucky’ at my second-grade talent show.”

Family and culture helped make music compelling for each of them. “Traditional Persian music is played with the intention of connecting with oneself spiritually,” Ahsani relayed, “and being raised with this concept really impacted me.”

Meanwhile, Giusti ties her love of music directly to her mother. “She always loved music and dancing, and karaoke was a huge part of our family gatherings,” she reminisced. “My mom would sing a lot of motown and oldies at karaoke, and I remember having so much fun singing with her, or even just listening.”

With this foundation, a musical education was a given. “My mom felt like she had missed out on learning a musical instrument when she was growing up in the Philippines because her family was too poor to afford it, so she signed up me and all three of my siblings for our school band as soon as we started fourth grade,” Giusti said. “From fourth grade until I graduated high school, I played in my school’s marching band, symphonic band, and jazz band where I learned to play clarinet, bass clarinet, tenor saxophone, marimba, and vibraphone.”

Ahsani took guitar and piano lessons as a child. “For my parents growing up in Iran, music education was considered a luxury that they never had, so my mom encouraged me,” she said. “I joined jazz band, orchestra and marching band in high school. Because our school was pretty small, I played percussion, drums, bass, and guitar for all groups.”

But they didn’t stop there. “After begging my parents for more music lessons, I also took piano and guitar lessons for a few years,” Giusti said. “Before starting Lemon Boy, I had never really played bass guitar but I have loved learning it so much!”

During her studies, Ahsani connected particularly with the technical skills she built playing each instrument. “Learning new skills was like constantly unlocking new levels in a video game,” she analogized. “Sometimes there’s frustrations at each level, but once you get to the other side it’s extremely satisfying, and I grew to love that feeling.”

Listening proved as important as playing. “I spent a lot of time as a teenager just learning how to play things by ear, which got easier as I started recognizing scales and the distances between notes,” Ahsani said. “I very vividly recall how learning certain guitar scales felt like I had unlocked a whole new world. It helped me understand the flow and reasoning for certain play styles.”

Now that the band is active, all three put their skills together. “As far as songwriting, we usually just stumble through an idea, and each time, we layer our feedback and suggestions until a song takes shape,” Ahsani said. “Even after we record a song, we continue to iterate and add zest. A live Lemon Boy song is intentionally never performed the same way twice.”

Lemon Boy operates without professional management, so the musicians handle all the logistics, as well. “I’m a visual artist by day, so I create all of Lemon Boy’s visual art, including album covers, merch, posters, you name it,” Ahsani said. “Nicole is our communication queen who manages all of our social media and booking. Myriah is our soccer mom, driving us around, providing snacks, and managing our ‘allowance,’ in other words, budget.”

Even at this early stage, they’ve learned a lot. “Music doesn’t need to be complicated or difficult to be powerful or catchy,” Giusti said. “Most of my favorite songs are simple, and I think the genius of it is in the simplicity!”

Their instruments are key to this discovery. “The more you recognize patterns and techniques, the more you see the possibilities to make new music and improve,” Ahsani said. “I learned a lot by memorizing shapes and patterns of things on the guitar neck and trying to connect them together.”

Lemon Boy expects to have a busy summer. “Our next show is at Alma Tacoma on July 23rd with Black Ends and Prismia, which we are excited about, as big fans of both artists!” Hernandez-Charbeneau said. “On August 26, we’re playing the South Sound Block Party in Olympia with some of our favorite bands, like Lisa Prank, The Districts, and Lovely Colours!”

Their dreams are even bigger. “In the future, we would love to tour and play outside of Washington,” Hernandez-Charbeneau mused, “but we’re still growing our platform and our finances to afford to do so.”