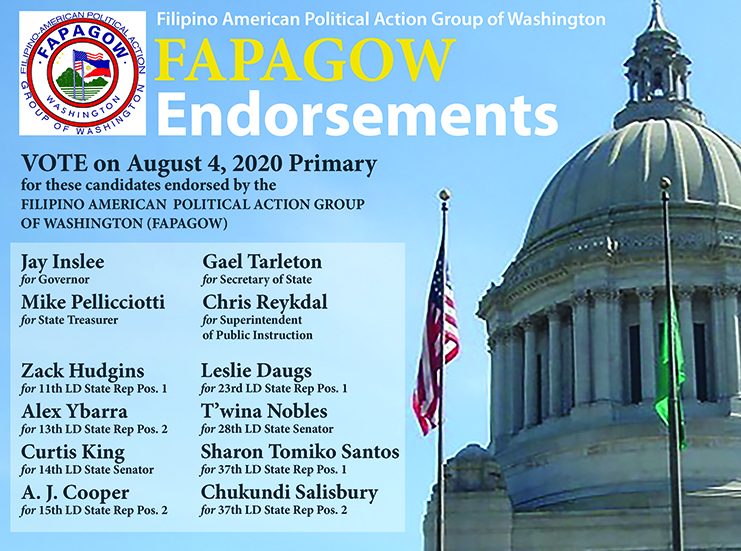 FAPAGOW endorses statewide and local candidates who advocate for Black Lives Matter and asks people to vote by August 4.

Founded in 1952 as the Filipino American Citizens, the Filipino American Political Action Group of Washington (FAPAGOW) is a progressive non-partisan organization that advocates for: climate and environmental justice; racial and economic justice in education, employment, and contracting; and culturally and language accessible and affordable health, human and housing services.

With the urgent call to Support Black Lives and timely community and self-reflections, FAPAGOW stands in solidarity with the Black Lives Matter movement. FAPAGOW strongly supports the movement’s quest for justice for the victims of police violence and for racial and economic equity.  The statistics are dire: Black men are 2.5 times more likely to be killed by police than white men; Black persons were 24% of those killed by police despite being only 13% of the population; for Black Lesbian, Gay, Bisexual, Transgender and Queer/Questioning, exposure to police violence and criminal justice is even higher with 73% reported encountering police in the last 5 years.

FAPAGOW acknowledges that to be anti-racist, Filipino Americans must embrace their Black ancestral roots as Aetas (Negritos), undo the Spanish colonial and American racist programming (that light or white is right and best, while dark or black is wrong and bad), and reject the role of  the “model minority” that has divided our shared pursuit of equity and justice as people of color.

In Seattle, Filipino American history is steeped with Black Filipino heroes. For example, the first Filipino family settler in Seattle is a Black Filipino family – the Jenkins who settled in Ballard.  FAPAGOW and the Filipino Educators Association of Washington was co-founded by the Black Filipino family matriarch Gloria Adams, with her daughters Myrna and Lauren continuing to serve as community leaders, and her granddaughter Lara Mae Cholette is now serving on the board of FAPAGOW.

FAPAGOW is committed to changing the status quo for racial equity and justice for Black, Indigenous and People of Color in Washington state and across the nation. As Filipinos say “Makibaka, Huwag Matakot: Dare to Struggle, Have No Fear.”