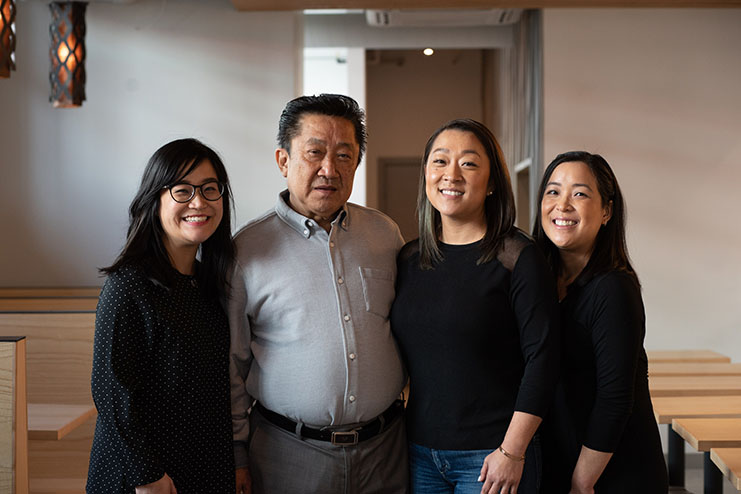 “I can’t wait, I can’t wait, when are you opening, can I come to the soft opening, what is your menu going to be, is my favorite still on there?”

Diane Le, co-owner of Phnom Penh Noodle House, fondly described the way long-time customers are reacting to news that the beloved Cambodian restaurant is reopening in the Chinatown-International District (CID). Le and her sisters Dawn Ung and Darlene Ung took over the restaurant from their father Sam Ung after he retired. Until it closed for a spell in 2018, it was a beloved community hub on King St.

“It’s always been a space of family, togetherness, it’s where people feel comfortable, it’s where generations have grown up,” said Le.

The sisters aim to bring this legacy to the restaurant’s new space in the Thai Binh building on Jackson St., along with a few changes. The new space is about half as small as it was, but now it is flooded with light from the windows, covered in straw-colored wood paneling, and touched with modern detailings. Some decor from the old space will come back, to complement the minimalist look. “That was the look we wanted — modern, clean lines, light and airy,” said Dawn Ung.

From the community and low-time customers, they have heard “positive excitement, which is kind of giving us momentum every step of the way,” Le said. “Because it’s been so difficult every step of the way. It’s like, when you know you have all of these supporters that are cheering you on, it’s really helped us get through the hump.”

It was part of nearly a million dollars the Seattle Office of Economic Development invested in tenant improvements for small businesses struggling with affordability.
Recently, the restaurant hosted a press conference where Mayor Jenny Durkan announced $1.2 million in City funding for the Only in Seattle initiative, which will support neighborhood business districts. The CID received $177,000 to pay for developing new businesses, marketing, cleaning graffiti and promoting public safety through lighting, improving and activating public space, according to a press release from the Office of Economic Development.

“So many forces, whether that’s commercial affordability, or displacement, or a destabilizing event, are making it harder for small businesses to thrive in Seattle,” said Durkan in a statement released after the event.

Councilmember Tammy Morales, who also attended the announcement, said in a statement: “Though small businesses are critically important, they often lack the financial support they need from traditional banks to grow their businesses.”

Jars of house-made hot chili oil were still stacked by the window at Phnom Penh Noodle House, gifts for the occasion. The sisters wanted to serve the mayor lunch, but health and fire inspectors didn’t come through in time to fire up the kitchen. Maybe the mayor could have helped expedite the inspections, Ung joked.

Also by the window were copies of a 2012 memoir by Sam Ung. A Cambodian refugee, he started Phnom Penh Noodle House in 1987. Ung presented a signed copy of his book, I Survived the Killing Fields: The True Life Story of a Cambodian Refugee, to Mayor Durkan, the Seattle Times reported.

After Dawn Ung’s son was injured in a car accident in 2018, the cost of his care forced the closure.

When the sisters decided to re-open, they started searching for a location outside Seattle at first. “Seattle is extremely expensive,” Le said.

One of their customers happened to be a broker for the Thai Binh building, and urged them to consider moving there. The sisters credit the landlord for being flexible in taking them on as a tenant. They’re grateful to the Seattle Chinatown International District Preservation and Development Authority (SCIDpda) for helping navigating the process, including encouraging them to apply for the City grant.

After recent closures of long-time Cambodian restaurants in White Center, Phnom Penh Noodle House reopens as “one of the few Cambodian establishments in the state,” Le said. Its restoration is “very significant for Cambodians.”

The menu is mostly the same. “We just condensed it a little bit, but kept all the favorites,” said Ung. The restaurant will now serve hard liquor in addition to the beer and wine it served before.

“The most exciting part is being able to do what we do best,” Ung said. “I miss the interactions – most of our customers, we’ve had long relationships with the regulars. Not being able to see them for about two years has been different. Used to seeing them regularly, so it will be nice – it will be like a reunion.”

Darlene Ung is expecting a child. “She’s kind of having two babies this year,” Le said.

With a new space, new staff, and new logistics to work out, there’s still some adjusting to do. To customers, Le said: “Get excited, but please be patient as we work through all the kinks.”