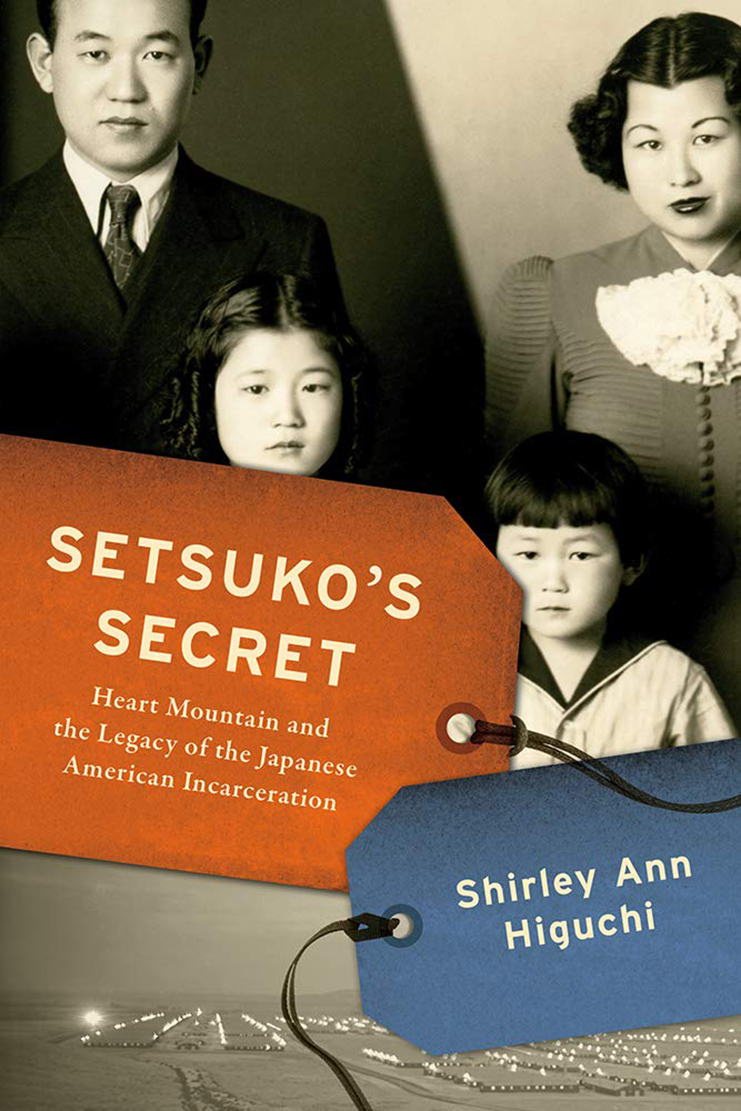 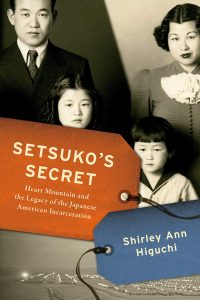 “Mom, why are you yelling?”

This is a story Japanese Americans know: when Shirley Ann Higuchi was at university, she did a project on the World War II incarceration her parents had experienced, but her mother did not want to talk about it. “I was happy!” Setsuko kept insisting, and shut the questions down: “You don’t know what it was like.”

Decades later, facing terminal cancer, Setsuko told her daughter to donate the koden, traditional condolence money given to the family, to the camp where she’d been held. Higuchi discovered that her mother had quietly been funding preservation efforts at Heart Mountain for years, and agreed to complete Setsuko’s term on their foundation’s board.

How do you tell the history of a secret?

In Setsuko’s Secret, Higuchi relates the complex stories that unfolded from her discovery, as the world her mother couldn’t share became her own. That world was both tiny and boundless—Setsuko was 12 years old in her first year in camp, a classmate to her future husband. Two years later, she was poring over publications on homeownership and remodeling, mail-ordered to the family apartment in Block 2, Barrack 14.

For her daughter, Heart Mountain was populated by legends. Six years after Setsuko’s death, Higuchi oversaw the opening of the camp’s interpretive center, along with Senators Daniel Inouye, Alan Simpson, Simpson’s childhood friend and two-time cabinet secretary Norman Mineta, and the journalist Tom Brokaw, who contributed a foreword to the book.

The story it tells is a collective one. Along with a thorough account of the government decisions behind the camps, Higuchi presents braided histories of her parents’ families, the Higuchis and Saitos, and of several prominent figures: Inouye; Mineta; Judge Raymond Uno of the storied Uno family, son of a World War I veteran; Takashi Hoshizaki, a draft resister of conscience who later served in Korea; and Clarence Matsumura, a veteran who helped liberate Jewish prisoners from Dachau.

Additional characters of interest in the book’s rich cast include Bill Hosokawa, the wartime editor of the Heart Mountain Sentinel, who shaped the Japanese American Citizens’ League (JACL)-approved narrative of race relations Higuchi comes to question, and Paul Tsuneishi, who pushed the Heart Mountain foundation to acknowledge the draft resisters’ story. There’s Estelle Ishigo, a white artist who accompanied her husband to camp, and was living alone on cans of soup in a basement apartment when she was rediscovered by a fellow incarceree, activist, and bearer of a hall-of-fame Nisei nickname—Harumi “Bacon” Sakatani.

Amateur history buffs will enjoy Higuchi’s methodically researched narrative of the incarceration, and scholars will appreciate the insider accounts of preservation efforts, including the successful 2015 efforts to stop an auction of camp artifacts originally gathered by Allen Eaton.

Yet later chapters reveal the book’s emotional core, a story about multigenerational trauma. Higuchi sees trauma in her mother’s drive to exceed, not merely to conform to, white middle-class norms, and in the perfectionism her Sansei (third-generation) contemporaries inherited from their Nisei parents. Confronting this trauma has political consequences: Higuchi suggests that it manifests in postwar assimilationism and the model minority stereotype.

The effects of trauma are clearest in a wrenching episode involving the death of Higuchi’s brother. Ken, a young engineer under pressure at work and in his personal life, smashed into a highway barrier while driving the wrong way on an access road. Higuchi, then an overworked attorney with a days-old infant son, put her life on hold, and flew to San Diego to look into Ken’s death. It was an accident, she concluded, due in part to unprocessed intergenerational trauma.

But it’s the scope and persistence of Higuchi’s investigation that drives the point home. She interviewed over 50 people, spoke to famed coroner Thomas Noguchi, 60 Minutes producer Don Hewitt, several congressional offices, and even the future ambassador John Bolton, then a Justice Department liaison. After a brief physical breakdown, she realizes that the “Sansei Effect” has struck her, too.

For the reader, the parallel between that investigation and the book is troubling. In both cases, the diligence of Higuchi’s research can be understood as the externalization of pain. Setsuko’s Secret is the literal manifestation of a family’s grief.

Does the book itself enact healing, for Higuchi or her community? The rifts between veterans and draft resisters, and supporters and opponents of the JACL’s version of history, continue to divide Japanese America. Perhaps “healing” is too complex a burden to place on a book, but Higuchi’s courage in facing trauma is inspiring.

Lately, I’ve been wondering if all those overachieving Nisei and Sansei, like the Higuchis, might have been like that all along—if it wasn’t camp, really, that drove them. What if the effect of collective trauma was actually to diminish their accomplishments, driving them into the shadows of their professional and interior lives?

Ultimately, the book’s emphasis on exceptional individuals has limits. Most Japanese Americans are not overachievers or heroes. The injustice of incarceration came for the bad as well as the good, for everyday folks, which doesn’t diminish their tragedy and triumphs one whit. Relatedly, despite her critiques, Higuchi’s account remains JACL-centric. This makes sense—Higuchi wasn’t raised on stories of camp, but the JACL was still a presence in her mother’s life.

Above all, Setsuko’s Secret is a mother-daughter story. “When my mother looked at me,” Higuchi writes, “I felt she was looking into a mirror.” Even her name, Shirley, was the “Americanized” name Heart Mountain officials had tried to give to Setsuko—a token of assimilation that she couldn’t accept for herself, but passed on to her daughter.

Sometimes the differences between generations turn out to be a bridge. Late in the book, after she succeeds Setsuko on the Heart Mountain board, Higuchi coolly notes, “I am not as polite as my mother”—and the sentence resounds, because you can feel the mother’s indomitable presence shedding constraints in the daughter’s formidable self-assertion.

The book concludes with another surprise. In Japan, Higuchi meets an elderly relative who recalls visiting, half a century earlier, with her immigrant grandmother Chiye—and talking and crying all night over her wartime experiences. Higuchi struggles to square this story with her memories of Chiye, whose composed façade never hinted at such anguish.