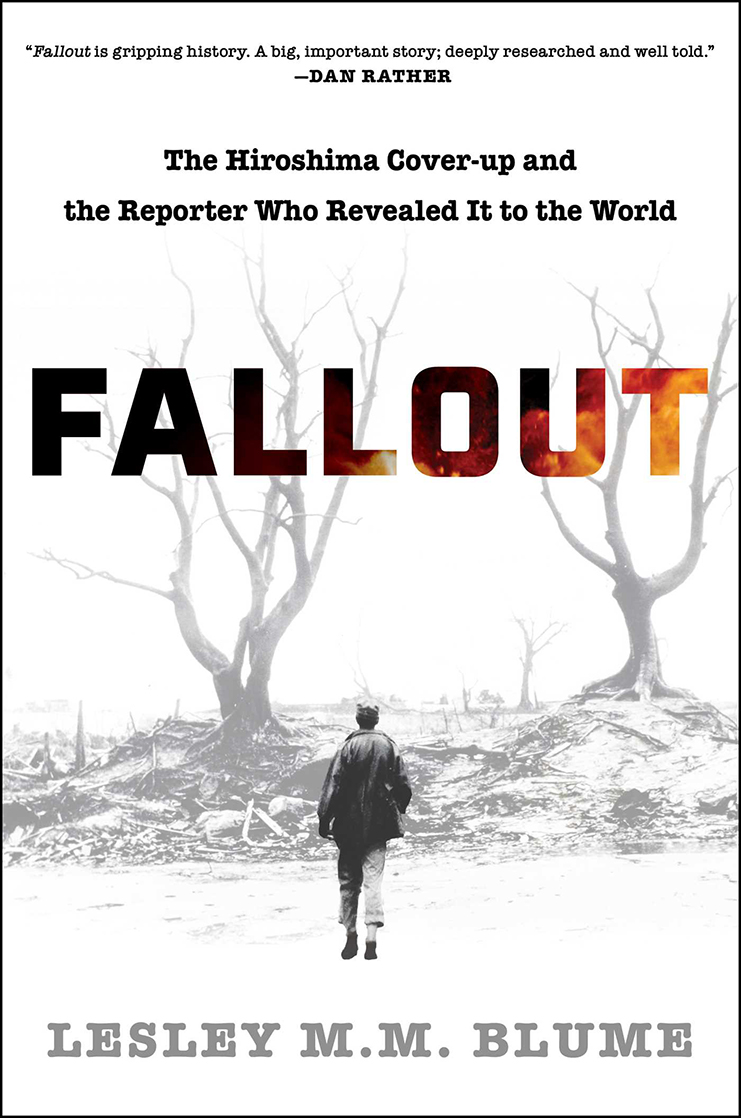 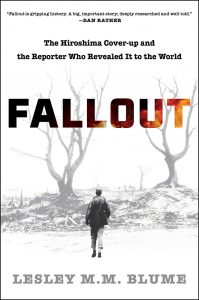 There is nothing more horrific than visualizing the twisted and charred injuries of the barely living survivors of the atomic bombings of Hiroshima and Nagasaki; yet, for over a year after the bombing, the cry of those agonizing injuries and painfully slow deaths were silenced by U.S. officials and the military.

That would all change in August 1946 with a single landmark issue of the New Yorker magazine written by Pulitzer prize-winning journalist John Hersey; the world’s view of the nuclear age would be forever scarred with terror and repulsion.

That original New Yorker article in its many reprints and iterations is better known today as the landmark book Hiroshima. But it almost did not get written. Fallout: Hiroshima Cover- up and the Reporter who Revealed It to the World uncovers the origin of John Hersey’s Hiroshima.

With skills worthy of Hersey himself, Leslie M.M. Blume narrates the harrowing tale of just how he, with editors William Shawn and Harold Ross of the New Yorker, pulled off such a news coup from occupied Japan where any negative news of Hiroshima was held tightly under wraps.   Operating secretly even in the New Yorker’sown headquarters, no other news organization caught wind of the project until it hit newsstands, which then flashed like the bomb that spawned it. Hiroshima was a unique phenomenon that first dominated the entire news cycle in the United States, and soon after, throughout the world.

Fallout is a nuanced story of many layers. With all of the suspense of a spy novel, Fallout recounts how John Hersey used stealth to out-scoop all others and uncovered a story for which they had neither imagination nor interest. It is also a story of the visionaries Shawn and Ross at the New Yorker, who had both the foresight and ambition to expand the scope of the magazine and journalism itself.

Neither in Japan nor outside was the story of the victims of the atomic bombing known in the months following the bombings in August 1945. Supreme Commander General MacArthur controlled every aspect of the news, including which reporters could enter the country, where they could go, and what stories could be told.

With such imposed limitations to visit the bombing sites and talk with survivors, there was little reporters could do, and besides, the enticing story of the time was the Tokyo war trials when Hersey arrived in Japan with a carefully schemed plan.

Up to that time, as far as the public knew, the official news about the aftermath of the two atomic bombs was clinical and statistically laden, and little was mentioned of the bomb’s aftermath upon victims. Instead, the destructive power of the bombs was emphasized and was expressed in equivalent sticks of dynamite or conventional bombs. As told by the military and government releases, the new atomic bombs were nothing more than supersized conventional weapons, and the human costs disregarded. No one less than the esteemed director of the Manhattan project, General Leslie Groves, reported that whatever radiation poisoning there might have been was “a very pleasant way to die.”

There was certainly an uphill battle for Hersey’s Hiroshima story if it were to take hold with the American public. The euphoria at the end of the war filled the victors, along with the relief that a horrific D-Day invasion of Japan would no longer happen. Added to this, the wounds of those who lost loved ones in the war and the feeling of revenge were raw and unhealed in the hearts of the American public. The specter of Pearl Harbor still burned brightly.

In order to succeed, Hersey had to humanize the effects that the nuclear bombing had on a civilian population and get readers to put themselves in the victims’ shoes. Of the hundreds he interviewed in Hiroshima, Hersey narrated the unvarnished, but not overly sensationalized, story through the eyes of six everyday people and how their day started as a normal, bright, August summer day, and then soon descended into a ghoulish nightmare populated with the walking dead.  With his storytelling narrative, a new style of story-telling journalism was established.

His New Yorker articled succeeded in not only scaling the Hiroshima bombing to a human level, but also more importantly, got people to imagine their own towns and homes being savagely ripped from normalcy by nuclear destruction and to sympathize with the reviled enemy.

The argument of not using nuclear weapons largely depends on people seeing the horrific atomic destruction on a human level; Hersey’s Hiroshima revealed to the world exactly that, something had never been seen before.

Fallout testifies to the force of truth revealed through journalism.  The real evil released from Hiroshima’s Pandora’s Box was not its explosive power, but rather the lingering human cost paid in deaths and in the mutilation, disfigurement, and suffering of its survivors.  The story of six of them in John Hersey’s Hiroshimachanged public opinion, and perhaps thankfully resulting in the world not seeing another bomb unleashed in war in 75 years.

Fallout tells how a seemingly simple, and courageous, piece of journalism may have saved the world.