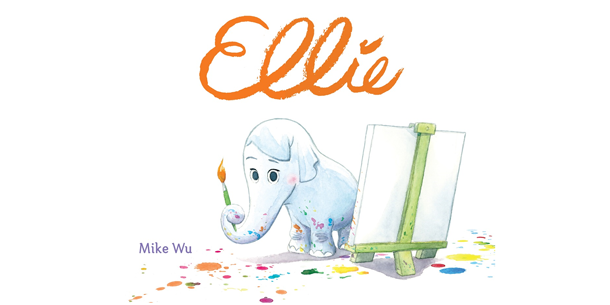 He has created a charming book of watercolor paintings that can be read over and again. The drawings are exceptional and Ellie, an elephant, has a lovable soul. Her soul shines throughout the story.

In Ellie, Wu’s watercolor style adds to the soft and gentle nature of the story. Each page is truly a work of art.

Ellie and her friends at the zoo try to save it from closing. What did Ellie do? She used her exceptional artistic talents just like Wu to connect with others.

In contrast to the violence in today’s world, this book is a wonderful opportunity for parents and teachers to talk with children about the beauty in the world and how they can use their talents to make society a place of community and compassion.

If you have not seen the book yet, take a look at the short video of the story at http://pdk.sagepub.com/content/97/4/38.full.pdf+html to see Ellie and some of her friends at the zoo. The video is also a work of art with music of leaves swirling in the wind and snow lightly falling.

From the video you can see that Wu is not only a gifted painter, but he also has great animation talent—he is an animator for Pixar Animation Studios. You might have seen films he has worked on such as Oscar-winning The Incredibles, Ratatouille, Up, and Toy Story 3.

Wu grew up in New York’s Chinatown where he spoke Cantonese with his parents who were immigrants from Hong Kong. Children were expected to do well in academic subjects like math and English in school, however Mike excelled in art and drawing. His parents supported his passion for art. Mike’s watercolor style was influenced by his Dad’s Chinese calligraphy.

Wu would go on to attend the California Institute of The Arts and studied Character Animation and Film. When he graduated, Wu worked at Walt Disney Feature Animation Studios after an internship at Chuck Jones and DreamWorks. At Disney he worked on films such as Hercules, Mulan and Tarzan.

Below is a short interview with Mike Wu, the author and illustrator of Ellie.

International Examiner: Why did you pick an elephant to be your protagonist of the story? How did you decide on naming her Ellie?

Mike Wu: I’ve always had an affinity towards elephants. They are such sensitive and intelligent creatures. I was inspired by a real painting of elephants in Thailand. My elephant was originally named Elinore but I went with Ellie because it was simpler, younger and more appealing.

Wu: Not really. I just tried to make them distinct and contrast with one another. Lucy, the giraffe, is just simple and sweet. She’s always the optimist. Gerard, the gorilla, is the intellectual and a voracious reader. I imagine he has a library of books and other fun things. As for Ellie, I guess she’s based a bit on me and my experiences of finding my way as an artist.

IE: How would you describe your artistic style in Ellie?

Wu: Stylized watercolor drawings. I always loved the sensitivity of watercolor washes and I tried to merge it with the design and appeal I studied in my Disney days.

IE: What did your daughter and wife say when they saw Ellie?

Wu: I have a two-and-a-half year old and she’s known Ellie as long as she could utter her name. I think to her, Ellie is like family. My wife has loved Ellie ever since I first roughed out my initial sketches.

IE: Has your cultural background influenced your artistic style? How and why?

Wu: I think I love watercolor, wash, and inks because of my dad’s beautiful Chinese calligraphy. Chinese language in written form is an art in itself.

IE: What did your parents think about art as a career?

Wu: I think they were worried about me as I wasn’t your typical straight-A Chinese student. In hindsight, art was the only viable option for me. I think they’re surprised and proud of what I’ve accomplished in my career.

IE: What do you want your readers to take away from the book?

Wu: That everyone has a talent or is good at something. Some find theirs sooner than others but if we work hard and are patient, we can find the one thing we were meant to do and be happy.

IE: Will there be more stories about Ellie in the future? If so, do you know when and about what?

IE: As you think about the future, what would you like to accomplish?

Wu: I feel that I’m starting a new journey with my books. I hope to do more books and continue telling my own stories in both books and film. In fact I have an exciting new chapter book for middle grade readers called The Oodlethunks. I illustrated the book and it is written by the talented Adele Griffin. It’s published by Scholastic and available on January 5.

Learn more about Mike Wu at his website at www.theartofmikewu.com.