The L.A. Times, Washington Post, New York Times, and many other newspapers have eulogized Yuri Kochiyama. In the weeks since her passing, they have chronicled her lifetime of activism for justice, from cradling Malcolm X’s head in her hands as he lay dying, being nominated for the Nobel Peace Prize, to the books and videos about her, and to her own autobiography, Passing It On.

Unlike what has already been written, this tribute to Yuri is about some of the everyday vignettes I was privileged to witness over the past 35 years.

Back in the 1970s, WNET TV’s Woman Alive asked for names of women to profile in their ground breaking weekly PBS series. I immediately thought of Yuri. My aunt who worked for the World Council of Churches in New York gave me her number. Yuri was glad to hear from Frances Maeda’s niece but would hear none of being filmed. In typical nisei (second generation Japanese American) fashion, she demurred and offered up names of other women. I realized many years later that if I had told her I needed to produce a segment about her to boost my fledgling career at KCT/9, she would gladly have agreed to participate.

In 1978, while stranded in a New York snowstorm, I saw a flyer for an event in Chinatown where Yuri was a speaker. There, sitting at a table outside PS 124 in the snow, was Yuri at the registration table. She read my name, and suddenly realized that I was that pesky TV producer from Seattle. She left the table and rushed me into the school to meet many of New York’s activists … as if I was a long lost friend.

That’s the way she was, a consummate organizer in an old school way. Yuri was always anxious to make introductions: young playwrites to someone she knew on Broadway, international students to political injustices here in the United States, activists from New York to activists from L.A., Black Power movement people to faith leaders.

In some ways, she was a typical nisei lady—self effacing and looking out for others. As she got older, friends at political events would shove a $10 bill into her pocket so she could take a taxi home. Most times, she would give the money to a homeless person, then take the subway home, even when she needed a walker. (By the way, the Blue Scholars’ song about Yuri mentions the “Free Mumia” bumper sticker on Yuri’s walker!)

Home away from home

The Kochiyamas lived in Manhattanville Houses off Broadway on the edge of Harlem, near Columbia University and Riverside Church. With six children, they had a prime four-bedroom unit. As the kids left, Yuri turned their bedrooms into a home away from home for activists, artists, and international students. By the time her husband Bill (she called him “Daddy”) passed away in 1993, Yuri had a room filled with filing cabinets, literally a historical archives of papers dating from World War II to every political movement in the United States. When the UCLA Asian American Studies department requested her papers, UCLA students spent summers in New York to sort and catalog her papers before sending them to L.A.

In her spare time, Yuri, tutored ELL students who wanted to improve their conversational English. She always invited them to holiday meals. I remember carving a Thanksgiving turkey on Eddie’s desk while people kept flooding into the apartment.

In addition to the international students, Yuri had randomly invited people and they brought friends. Out with the folding chairs stacked on one side of the living room, people were eating in the kitchen, hallway, and a couple of the bedrooms. Over the years, there were stories about who sat in those folding chairs. Hollywood and Broadway celebrities, international students, extended family and friends interspersed amongst the revolutionary leaders of the 20th century.

Yuri kept a bookshelf full of handwritten address books. Once I was looking for the contact information for Rev. Bernice King, daughter of Dr. Martin Luther King, Jr., and Coretta Scott King. I knew to call Yuri. Her response: “Do you want her home number, her office number, or the number at the church?”

Yuri was also a woman of faith. As a young woman, she taught Sunday School in San Pedro, California, her hometown near L.A. In New York, it wasn’t about the denomination or even the religion … at one point, she was a Muslim. She had faith in a higher being and in the goodness of people. She once worked for the Board of Global Ministries of the United Methodist Church. While she knew it was a progressive institution, she kept her activism separate from her job, which was their loss.

One February, we went to the Japanese United Church for a Day of Remembrance event commemorating the day President Roosevelt sent 120,000 people of Japanese ancestry to concentration camps during WWII. There I met Yuri’s peers: the artist Miné Okubo, writer Michi Weglyn, and fellow activist Kazu Iijima. What a stunning group of feisty nisei women!

Sometimes, her family and friends worried that Yuri was too trusting. In the days of FBI agents infiltrating progressive groups, we worried that she probably housed an agent provocateur or two at the apartment.

Yuri was also sometimes goofy in a naïve way. L.A. writer and filmmaker Karen Ishizuka called it “corny.” Sometimes Yuri would get all wound up about the storyline of a TV drama, then ask a question as if the drama was happening in the real world. Other times, she would be gleeful about trivia, like marveling at how plump raisins got if you put them in the pot while the oatmeal was still cooking.

Once, Bill and Yuri were off to a party and asked me to go along to help carry the shopping bags full of her precious bears … yes, Hawaiian bears with hula skirts, college bears, Rastafarian bears, and large and small teddy bears all colors of the rainbow bears. It was a bear party. In New York, people sit rather poker faced on the subway, but that day, our bear bags brought smiles all around.

She even thought that presidents would see the light and change U.S. policy. “Oh, maybe he’ll change his mind; he has to,” she would say with the utmost sincerity. She was always a boost to our cynicism.

A lifetime of hidden treasures

In 1999, while visiting family—Audee, Eddie, Jimmy, and Tommy (the four remaining Kochiyama kids and the “Grands” as she called her grandchildren)—Yuri had a stroke. She remained in California until her death.

The family and friends cleared out the Harlem apartment. We were literally dumping things we thought of no value—things like volumes of Readers’ Digest condensed. Suddenly, a photo fell out. It was photo of Yuri and Eleanor Roosevelt, arm in arm. So, then, we pulled all the volumes out of the garbage can and shook them upside down to see if there were any other treasures stuck between the pages. More photos and more souvenirs of days past.

Yuri single-handedly was a lifeline for political prisoners. And, she connected us to them. While in New York on my way to Kenya, she made me promise to visit former Black Panther Doc Powell and his wife Sue, who had been in exile there for years.

Yuri was a writer. Long after she no longer wrote position papers on various issues, she wrote to political prisoners. She had everyone signing petitions or writing a note to David Wong, a young Chinese man without papers. After years in prison, David was released, but immediately deported back to China. David never got the chance to thank Yuri in person. But, Geronimo Pratt went to thank her, even before he went home to see his family.

She wrote prolifically, in that unique beautiful handwriting, and was always running out of stamps. Rolls of stamps were like gold to Yuri and we often left them as a thank you for her hospitality.

A group called 18MillionRising.org was founded to promote AAPI civic engagement, influence, and movement by leveraging the power of technology and social media. The group started a campaign to create a Yuri Kochiyama postage stamp. How great and fitting is that? Join in the online campaign: http://act.engagementlab.org/sign/18mr_yuri_stamp.

There will never be another Yuri Kochiyama. Our best tribute to her is to work for justice in our everyday lives.

Sharon Maeda is executive director of 21 PROGRESS and a longtime contributor to the International Examiner. 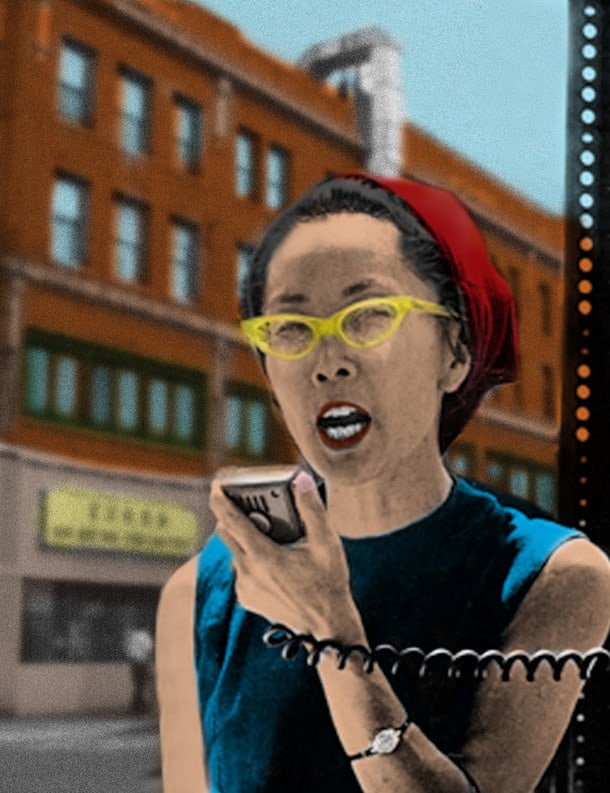 Yuri Kochiyama: A remembrance and appreciation