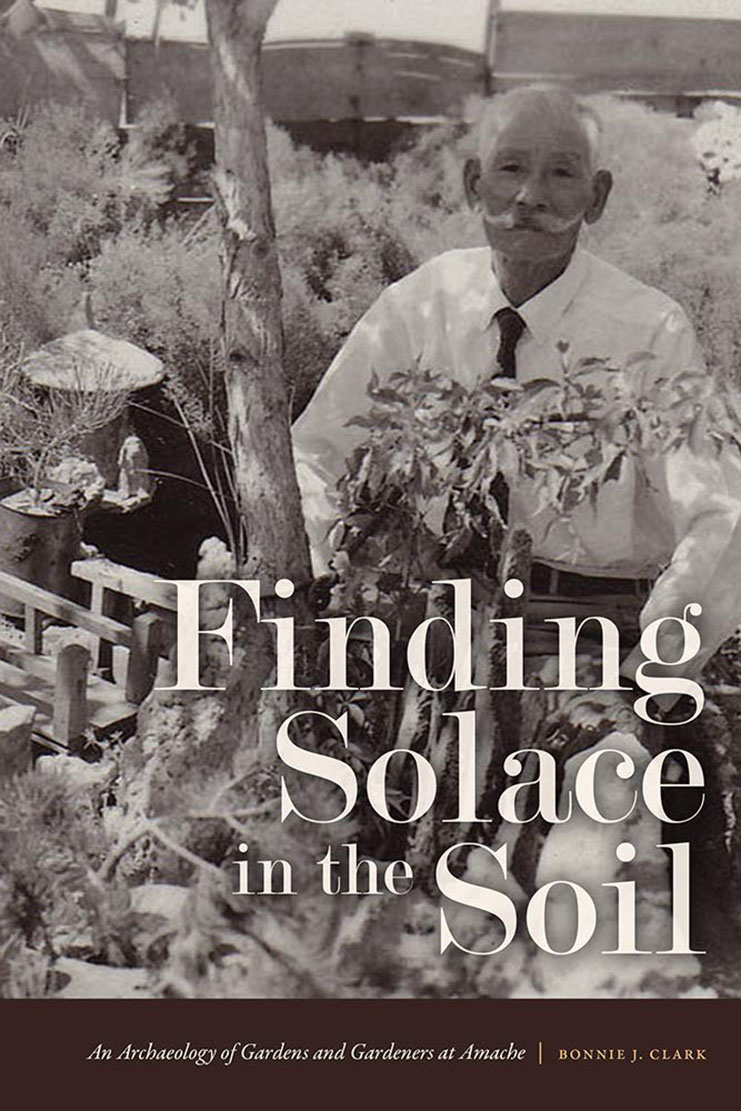 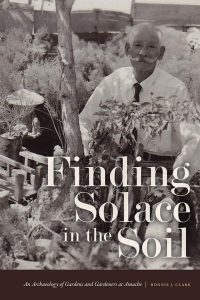 Bonnie J. Clark, professor and curator for archeology in the University of Denver’s Anthropology Department, has done an amazing job of transforming artifacts from the past into real life points of discussion for the present. In her project with the gardens of Amache, she includes high school and college students, graduate students, survivors from the Granada Relocation Center and their descendants and begins a conversation with other interested groups across the country to make the past tangible based on objects, sites and landscape.

In her prologue, A Visit to Amache, Clark suggests imagining a visit “between the autumn of 1942 and 1945” where “if you could go back in time, you’d likely travel there by train.” As you drive south to Amache, you would “notice Japanese-Americans working in the fields,” “the hundreds of gardens framing the barracks,” to the “hill and pool pond” next to the Amache Town Hall. Oftentimes, it is difficult to visualize another’s memories (especially if one does not belong to the same generation) or to get a feel for life among barracks and a challenging landscape. By digging into the remnants of Granada Relocation Center, Clark’s research makes this journey real and illustrates a community that used limited resources to beautify their confinement. One develops an even greater appreciation for the physical labor and ingenuity of those who were incarcerated during the war years.

Clark specifically points out three different types of information about the gardens at Amache. The first, “the written, is the stuff of historians” and what I am most familiar with. The second is the remembered, “what we can learn from talking to people about both their own and their family’s stories.” As pointed out by one participant at a University of Colorado Engaging Ideas presentation on the Gardens of Internment, she had different memories from her brother and sister. Sharing these insights helped her to reconnect and better understand.

I wish such artifacts and details were available when as an adult, I asked my aging mother about what she remembered of camp life. I was left with vague impressions and the fact that without anything concrete to anchor her, my mother’s recollections were fleeting attempts to explain what had happened to her parents and siblings.

Beginning with research in Japan’s landscape, Clark concisely explains the “veneration of the natural as the basis on which Japanese garden philosophy is founded.” Garden design is explored because of how it influenced the diaspora that made their way to Hawai’i, Brazil, and the United States. California statistics reveal the overwhelming number of Nikkei who made their livelihood through farming and gardening; it is also this group that is relocated to Amache where they influenced the landscape with their horticultural skills—be it with trees, rocks, local flora and fauna and philosophical outlook.

Gardens served many purposes, many of which I did not imagine before reading this book. Since barrack blocks were identical, gardens helped express different styles and viewpoints. Making use of the bane of the Amache landscape, sand gardens became popular and in November 1943, an exhibit of Kunsen Ninomiya’s 100 students were viewed by “over 3,000 people despite its location in one of the 100-foot x 20-foot Rec Hall buildings turned into the camp’s Hospitality House.”

Finally, Clark points out what archaeologists specialize in: “objects and place made by people, the wrought.” Through many photographs, maps, tables of inventory and analysis, the gardens of Amache are revealed to be places of community, created through skill and resourcefulness. As Clark points out to her students, “Each one of those trees was either planted by an incarceree or grew from the roots of a tree that was.” Most of these were cottonwoods or willows that had grown near the river. Shaded from the hot sun, children played marbles during the day while younger adults played music and “imbibed” in the evening. Block gardens and victory gardens were often planted close to the entrance of an Amache barrack home for aesthetic reasons and to help relieve wartime food shortages.

What emerges is a fascinating and complex examination. Clark’s writing is concise and well-documented as in the example of researching camp directories where the roster revealed occupational information. At Amache, it is discovered that 48% of the population’s primary occupation was agriculture or horticulture (not including the many women involved in family businesses such as farms or nurseries). ¬

As a result of the gardens, shade became available¬¬ along with reflective moments where one might escape one’s surroundings for a while. Such intensive archaeology of these gardens, in terms of design, influence, location, and composition in one particular camp makes this part of history come alive.