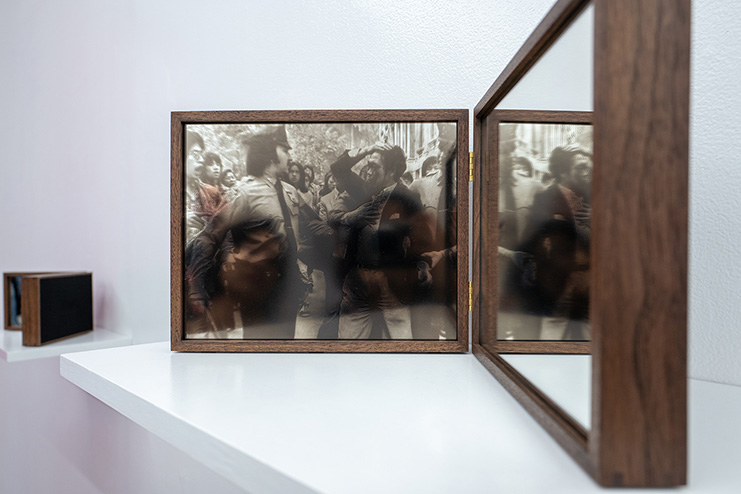 The Henry Art Gallery at the University of Washington is presenting its Critical Issues Lecture Series on Friday afternoons, and everyone is welcome.  The series is organized by the UW’s School of Art + Art History + Design, in collaboration with the Henry, for UW students studying fine art, and the online format allows the general public to benefit, as well.

Coming up on February 5, the speaker is Hồng-Ân Trương, who received her MFA from the University of California, Irvine, and who is now an activist and Associate Professor of Art at the University of North Carolina at Chapel Hill.  She utilizes a variety of media, from photography, to sound and video, to performance, focusing primarily on war, immigration, and refugee narratives.

Truong’s interest in visual art started at an early age. “As a kid when I first encountered images of the American War in Viet Nam in old Time and Life magazines from the 1960s and 1970s, it made a huge impact on me because I couldn’t reconcile those images with how I saw myself or my family,” she said. “I knew little about the politics of the war of course but as I grew older, I started interviewing my parents and reading more about it on my own.”

She also felt an intrinsic motivation to learn the techniques of photography. “I learned how to use a 35mm single lens reflex camera when I was around 13 years old,” she said, “and it became a way for me to escape from the daily realities of my life but also to start to world build for myself.”

But pursuing an actual career in art was another matter altogether. “I never thought I would be an artist because I felt a lot of pressure as a child of poor refugees to study and have a career that would guarantee stability,” Truong said. “But after I finished my undergraduate degree, I was lucky to land a job at the Center for Documentary Studies at Duke and meet and take a class with an amazing artist and scholar, Deborah Willis. Deb’s mentorship and her class changed my life.”

At the same time, Truong became immersed in the political issues facing the United States, and her activist work became inseparable from her art. “It is my work as a politically engaged person who is fighting, along with so many others, against capitalism, patriarchy, the state, and white supremacy for a better, more equitable world,” she said. “So that work happens on the street and in organizing, but also in my visual practice.”

Truong views activism and art as two side of the same coin. “Fighting for racial justice in my community and against police brutality, for example, is connected to my research and examination of U.S. policies around immigration and citizenship,” she said. “One is really direct and goal-oriented; the other is connected to pedagogy and discourse, about engaging a broader public in conversation about these issues.”

In both arenas, Truong seeks out the contradictions in dominant American narratives about the nation and racial identity. “So what I try to do in my work is really point out these contradictions,” she said, “by digging as deeply as I can into the specificity of certain historical moments and individual stories that allow me to try to change the way that we understand and internalize these narratives.”

In this vein, Truong has created an ongoing project called We Are Beside Ourselves, that she first showed the Rubber Factory in NYC in 2018.  “It’s a current project that does exemplify my engagement with history and the archive,” Truong said.

Before that, in 2016, Truong had participated in a two-person show at the Irish Museum of Modern Art, centered around her film Tell Me Terrible Things They Have Known.  Focused on the Rape of Nanking and Iris Chang, Truong examined the relationship between trauma, remembrance, and forgetting.

Since then, Truong has continued to tackle the challenges of a dual career in higher education and fine art. “I teach at a university, which of course is what a lot of artists do in order to be able to make a living and continue to make art, because it’s a very, very small percentage of artists who can make a living off their artwork alone,” she said. “But as faculty, you have so many responsibilities that it can be very hard to balance your work as a teacher and your own practice.”

In this, Truong finds common ground with many other artists. “I have learned over the years how to do this better, but I don’t know if I have addressed those challenges well,” she said. “It can be very disheartening to make work and exist in a system that has so many problems.”

And yet, Truong feels compelled to continue the work, and to inspire students to follow suit. “I hope that students absorb the notion the stories that we tell matter,” she said.

In her talk at the Henry, Truong plans to emphasize the importance of visual culture and narrative. “How we see what we can see – how bodies, and also voices, become legible – is dependent on historical practices of constructing knowledge and truth vis a vis museum institutions and media institutions, which embeds our collective memories,” she said. “And at a moment in the midst of a reverberating Trumpist era of assaulting facts which actually erode our reality, it’s more important than ever to engage in this struggle.”