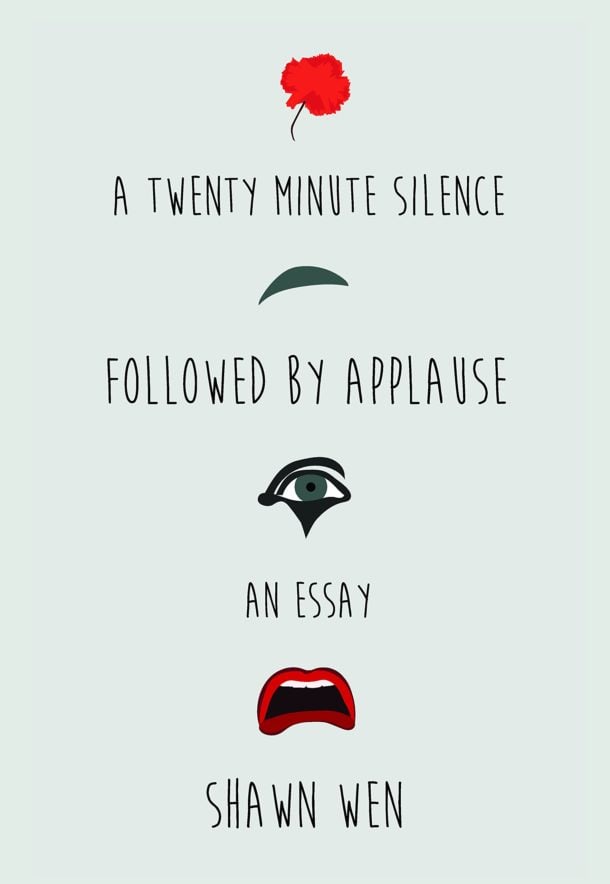 How much can there be to say about silence?  According to writer Shawn Wen, a lot.

In A Twenty Minute Silence Followed by Applause, Wen offers us an experimental book-length essay on the renowned mime Marcel Marceau, playing with form much as Marceau played with human expression.

The freedom to try out literary experimentation was hard won. “I’ve wanted to be a writer since I started reading, but I wasn’t sure what form it would take,” Wen said. “It wasn’t until I first came upon lyric essays in college that a window opened for me. It seemed so malleable, so playful, so freeing.”

This lyricism was unlike the writing she had imagined as a child. “A few weeks ago, I was walking on the shore of a lake where I saw a child in a bathing suit journaling furiously,” Wen recalled. “It cracked me up, not because it reminded me of me at that age, but because that was how I pictured myself back then.”

Wen felt drawn to literary characters, as well. “My childhood role models were fictional characters: Felicity, Daria, and Jo March—the Winona Ryder version,” she said. “I gravitated towards them because they were ballsy, bookish, and kind. And they all frequently disappointed their parents, something with which I was intimately familiar.”

More recently, Wen has admired Andrês Barba, particularly his work Such Small Hands. “Clear, bright prose rendered to chilling effect,” she said. “Each line is so pretty, I would read and reread sentences, sometimes mouthing the words. And Barba makes some complex formal moves that the reader can grasp immediately. How does he do it?”

Wen has sought for answers in disparate places, including radio. “I was drawn to radio’s immediacy,” she said. “I liked the idea of speaking into a microphone and those words then ringing out into the world.”

Live radio also showed Wen the craft of constructing those words to speak. “Radio was also a great writing teacher,” she said. “It taught me to study human speech, to listen for breath, rhythm, and silence.”

And silence was the great impetus for Wen’s book. “Yes, this project started as a joke, ‘mime radio,’” she admitted. “I wanted to use sound to toy with the idea of silence. So I interviewed mimes and made audio recordings of mime performances.”

But that project just made Wen hungry for more. “When I dug into the archives at the New York Performing Arts Library and realized how heady, articulate, contradictory, and emotive Marceau was in his speech, it turned into a book instead,” she said. “At its heart, it’s still a similar project, now using words instead of sound to evoke a wordless art.”

Ironically, this writing project led Wen away from the written word. “This book contends with movement, bodily expression, and mortality,” she said. “Over the course of writing, I began to pay more attention to my own body.”

Wen concedes that this progression may result from her own experiences as much as from Marceau’s. “Maybe that has to do with getting older,” she said. “I used to take my body for granted, like it was a suitcase that carries my brain from one space to another. Now I consider its sensory experiences, its strengths and weaknesses, its shape in space. I see my body now as more of an instrument.” Just like Marceau did.

In keeping with this, Wen plans to share her book with live audiences.  “In-person events are funny,” she said. “Don’t live readings seem to contradict the original purpose of printed materials? But whatever. I like them.”

Wen seems to revel in the contrast. “Writing a book requires such sustained attention, isolation, and energy,” she said. “Now, shepherding this book to its audience is a joy.”

She plans to balance her book readings with her current full-time job, and hopes to visit the Pacific Northwest in January 2018.

While she hopes to inspire interest in Marceau and the phenomenon of silence, she’s less inclined to see herself as a role model for other writers. “I am terrible at taking other people’s advice,” she said. “I have to make my own mistakes.”

But if pressed to offer advice to those who aspire to the writing life? “I suppose I would tell young people to trust themselves,” Wen said. “They’ll figure out their own ways.”

Shawn Wen will be visiting Elliot Bay Books for a reading on January 16 at 7 p.m.