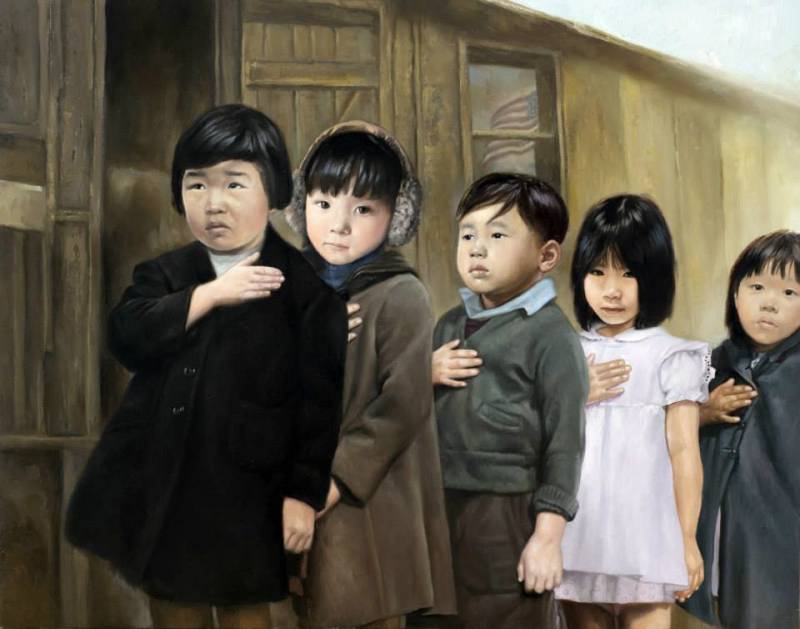 “This here starts the story of leaving, children having to leave their toys behind, and how younger people probably close to my parents age had to leave with uncertainty,” says sculpture artist Jan Hopkins, gesturing to series of oil-on-canvas depictions by husband and fine artist Chris Hopkins. “They had no idea.”

These paintings are only the beginning of the multimedia chronological narrative of Jan and Chris Hopkins’ collaborative exhibition, Americans Interned, on view at the Schack Art Center.

In the wake of President Roosevelt’s Executive Order 9066 in 1942, hundreds of thousands of Japanese residents were evacuated from their homes with orders to leave their lives behind, bringing only what they could carry on their backs.

The history of Japanese American incarceration on the West Coast during World War II is not as distant as the sepia-toned history book photos allude to. The grief of dislocation and loss is still remembered by the survivors that live in the Puget Sound region today and survived by the relatives who remember the stories of those that have passed.

On view at the Schack Art Center, Americans Interned survives the memories of incarceration during the war, gathered over five years from historical research and the stories and narratives retold by Jan Hopkins’ relatives, who lived through relocation by the Japanese exclusion orders themselves.

The impact of Japanese internment affected young and old, and Americans Interned delves into how racially-motivated exclusion affected the identities and livelihoods of the children and elderly who endured internment and the lasting repercussions.

Chris Hopkins, the artist behind the oil paintings in the series, explained that Jan’s relatives were involved with the pieces beyond just retelling their stories. Often posing as reference points, the family members helped Chris capture realistic expression and movement in the oil paintings.

“Jan’s dad posed for this one,” he explained, pointing to his recreation of Camp Harmony. Infamously located on what is now the Washington State Fairgrounds in Puyallup, Hopkins depicted the relentless mud and the expressions of uncertainty in the procession of Japanese Americans filing into the camp. “That rollercoaster you see in the background,” Hopkins pointed out. “That rollercoaster is still there today.”

In the center of the gallery stands one Jan Hopkins’ pieces that portrays the heartbreak of her mother after her best friend disassociated herself from her because she was Japanese. When her mother was forced to leave for camp, her only possessions were a small bag of clothes and her beloved violin. “At the time, it was like her only friend,” Jan explains.

The exhibition continues to explore the history of life in the internment camps, where detainees were forced into agricultural labor or war effort manufacturing for little to no pay. In the corner of the exhibition stands a historical recreation of living quarters in the internment camps organized by the Puyallup Valley Chapter of the Japanese American Citizens League.

The display of a straw mat bed, a few blankets and children’s clothes hung by a clothes line across the space. Though the display couldn’t include the holes in the walls, the extreme temperatures or the sanitation issues, it served as a thought-provoking example of what conditions were like in the camps.

The series further explores the repercussions and residual prejudice that Japanese Americans faced even after the war. A sculpture titled “Out of the Mouths of Babes” illustrates the moment of confusion and disbelief when her brother was a child playing with friends when one friend suggested, “Let’s play war. You be the japs.”

For a racial slur to carelessly leave the mouth of a child, Jan Hopkins described the event as an effect of the lasting effects of racism after the war. “The sadness about prejudice is that it’s still alive and kicking,” Jan Hopkins explains. “Even after you’d think there was no more, there still is.”

Though the exhibition remembers the grief and trauma from Japanese internment, the process of remembering the stories who survived and those could not leads to solidarity, healing and reconciliation.

To supplement Americans Interned, the Schack Art Center invited author and curator Mayumi Tsutakawa for a lecture on July 29th, in which she discussed her family’s history of internment during the war.

Schack Gallery Director Carie Collver describes the event as a powerful remembrance in which survivors were able to connect, share and remember their stories. Packed to full capacity, people from the surrounding community flocked to Schack for Tsutakawa’s lecture.

“We couldn’t even fit standing room only,” Collver says. “I even sat two people in the janitor’s closet.”

Collver recalls witnessing the reuniting of two childhood friends who were at the same internment camp and had not seen each other in decades. She describes the joy and surprise as several attendees found solace in Minidoka: An American Concentration Camp by Teresa Tamura, a book on sale at the gallery store that remembers the interned at the Minidoka internment camp in Idaho. “[Some guests] had no idea they were in that book, or that they had family members in the book,” Collver recalls.

Remembering the experience of interned Japanese Americans serves as a way to grieve, reconcile and heal, not only for the community but for the Hopkinses themselves who have endured the loss of family members during the process.

Americans Interned provides a way to grieve and come to terms with the past, in hopes that the nation will never repeat it.

For more information on upcoming events and lectures visit schack.org.