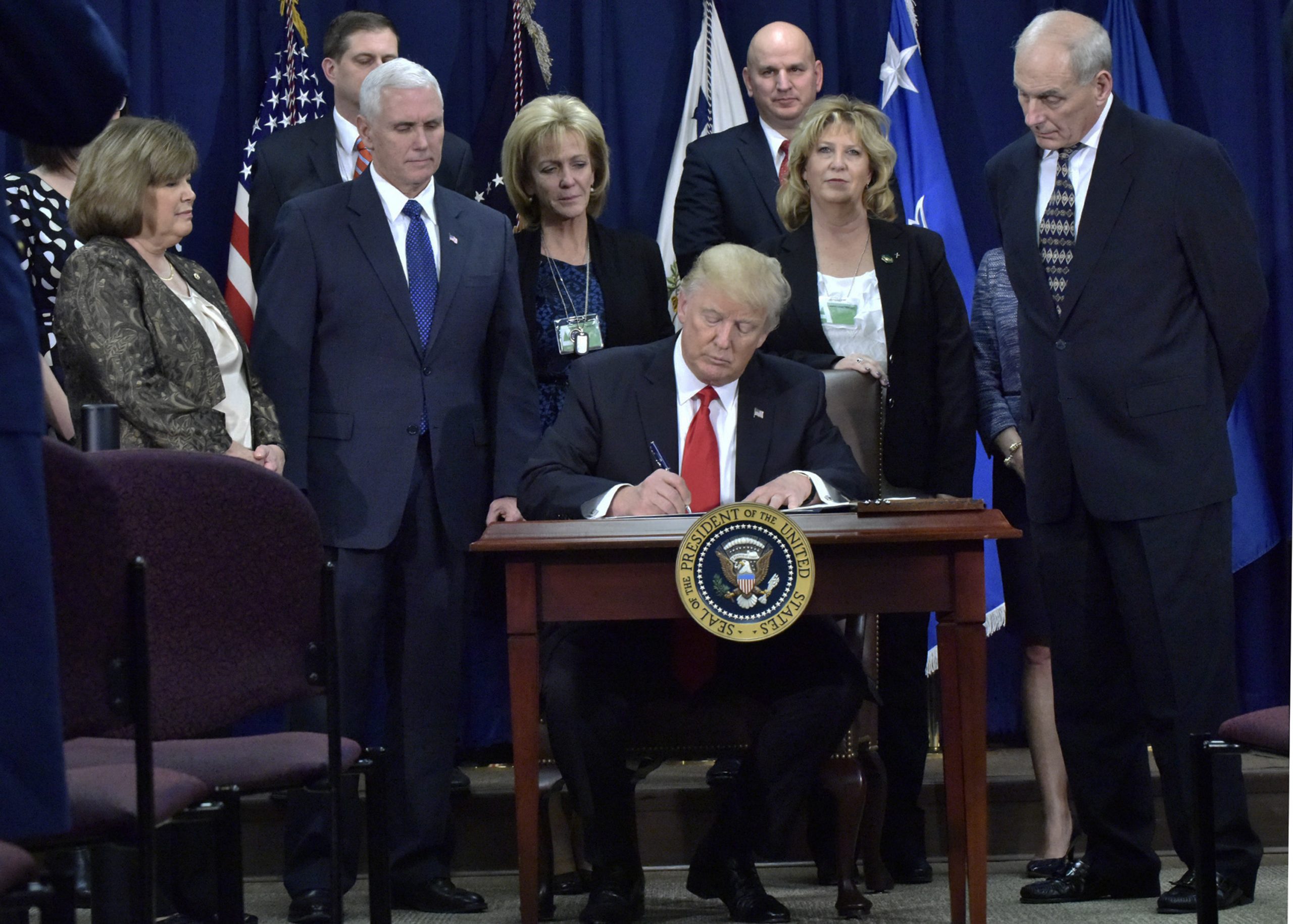 An executive order signed by President Donald Trump during his first week in office sent shockwaves throughout the United States. The Executive Order instituted a temporary entry ban of nationals, except for US citizens, from seven Middle Eastern and African countries.

The order also indefinitely prevents Syrians from entering the United States as refugees. The order included a provision to permit otherwise barred refugees into the country on a case-by-case basis, specifying if they were a persecuted religious minority in the country of nationality.

The countries listed in the order include Iran, Iraq, Libya, Somalia, Syria, Sudan, and Yemen. This order is limited to 90 days.

The order cited the potential but unsubstantiated terrorist ties from immigrants, refugees, and visa-holders, particularly of people from war-torn countries. The order referenced 9/11 as one such terrorist attack. None of the hijackers came from countries listed in the ban.

Kelly later denied this, saying he knew about this order “About a year and half to two years ago,” during a press conference the following Tuesday. Kelly said he had seen two drafts during the week following the inauguration.

Rep. Paul Ryan, speaker of the House, said that he learned about the executive order as it was “rolled out.”

Unspecific language in the order caused confusion in the first few days of the signing, and government agencies had cleared some of the language since. During the initial implementation of the order, barred from entering were new immigrants and refugees to the United States along with students, visitors (including finances of US citizens and spouses and children with pending immigration visas) and temporary workers, as reported by the New York Times.

A number of people holding citizenship from the barred countries, including green card holders, were detained at airports upon arrival just after the executive order was signed.

The detention prompted protests at every major airport in the United States on January 28. Over the weekend at least 60 protests happened nation wide.

Protests were also held in Beligum, Canada, and the United Kingdom. In the United Kingdom, where Prime Minister Theresa May plans to meet with the president over 1.8 million people have signed a petition to prevent a state visit, and parliament will debate the visit in February 20.

At Sea-Tac Airport on January 28,  six people were detained after landing, four of whom were sent back to their “country of departure” reported The Seattle Times citing a Port of Seattle official.

Two people represented by the Northwest Immigrant Rights Project and ACLU of Washington were released from detention.

Over 1,000 people were reported to be at Sea-Tac on January 28. Journalists reported that police used pepper spray and bicycles against protesters at the airport later at night. The Seattle Times reported that 33 people had been arrested.

Congresswomen Suzan DelBene and Pramila Jayapal were both at the protests on January 28.

The Port of Seattle released a statement later saying that “the abrupt nature of the executive order” prevented the agency from properly respond. They said they requested a briefing from Customs and Border Protection.

A federal court judge in New York state issued a court order preventing the deportation of people from countries in the executive order the day following the signing of the order.

“President Trump’s Executive Order today essentially targets Muslims based on their religious beliefs and undermines the right to religious freedom enshrined in the First Amendment,” said Seattle Mayor Mike Murray in a statement. “We cannot become a nation where any person – citizen, immigrant or refugee – must pass a religious test to be accepted and we cannot turn away people who are fleeing violence and persecution based on their beliefs.”

The King County Council passed a motion condemning the ban.

“The President’s Executive Order, which does not include the countries of the people who actually committed the 9/11 attack, strains credulity,” said Councilmember Larry Gossett in a statement.

Ferguson said they were pursuing a nation wide revocation of the executive order. The lawsuit also cites harm to Washington residents, economy, and sovereignty. Amazon and Expedia included declarations of support for this lawsuit.

“This [executive order] is un-American, it is wrong, and it will not stand,” Inslee said at a press conference. “This is not a reality TV show. This is reality.”

Ferguson along with 15 other attorney generals condemned the order one day before the lawsuit announcement.

On Tuesday, February 6 the case went to oral arguments in Ninth Circuit Court of Appeals.

Trump has shuffled his National Security Council on the last weekend of January to include Steve Bannon, one of Trump’s top political advisers and the former executive chair of the far right wing website Breitbart. Trump also removed the director of national intelligence and the chief joints of staff from regular attendance at the cabinet level meetings. According to the White House spokesman Sean Spicer, the director of the CIA will be reinstated to the council.

In the federal government, Trump replaced then acting Attorney General Sally Yates after she said that she could not defend the executive order in court.

In a statement issued before her dismissal, Yates said “I am responsible for ensuring that the positions we take in court remain consistent with this institution’s solemn obligation to always seek justice and stand for what is right. At present I am not convinced that the defense of the Executive Order is consistent with these responsibilities nor am I convinced that the Executive Order is lawful.”

A White House statement said refusing to defend the Executive Order meant Yates “betrayed the Department of Justice.” Dana Boente of the Eastern District of Virginia was sworn in as acting attorney general late Monday night.

The acting assistant secretary of the Department of Homeland Security, who is also the director of the Immigration and Customs Enforcement (ICE), was also replaced Monday night, seemingly with no explanation. Thomas Homan, formerly the executive associate director of enforcement and removal operations at ICE, took over as acting assistant secretary from Daniel Ragsdale.

As of Tuesday January 31, the administration maintains that the order is not a travel ban. This despite Trump calling the Executive Order a ban on Monday January 30.