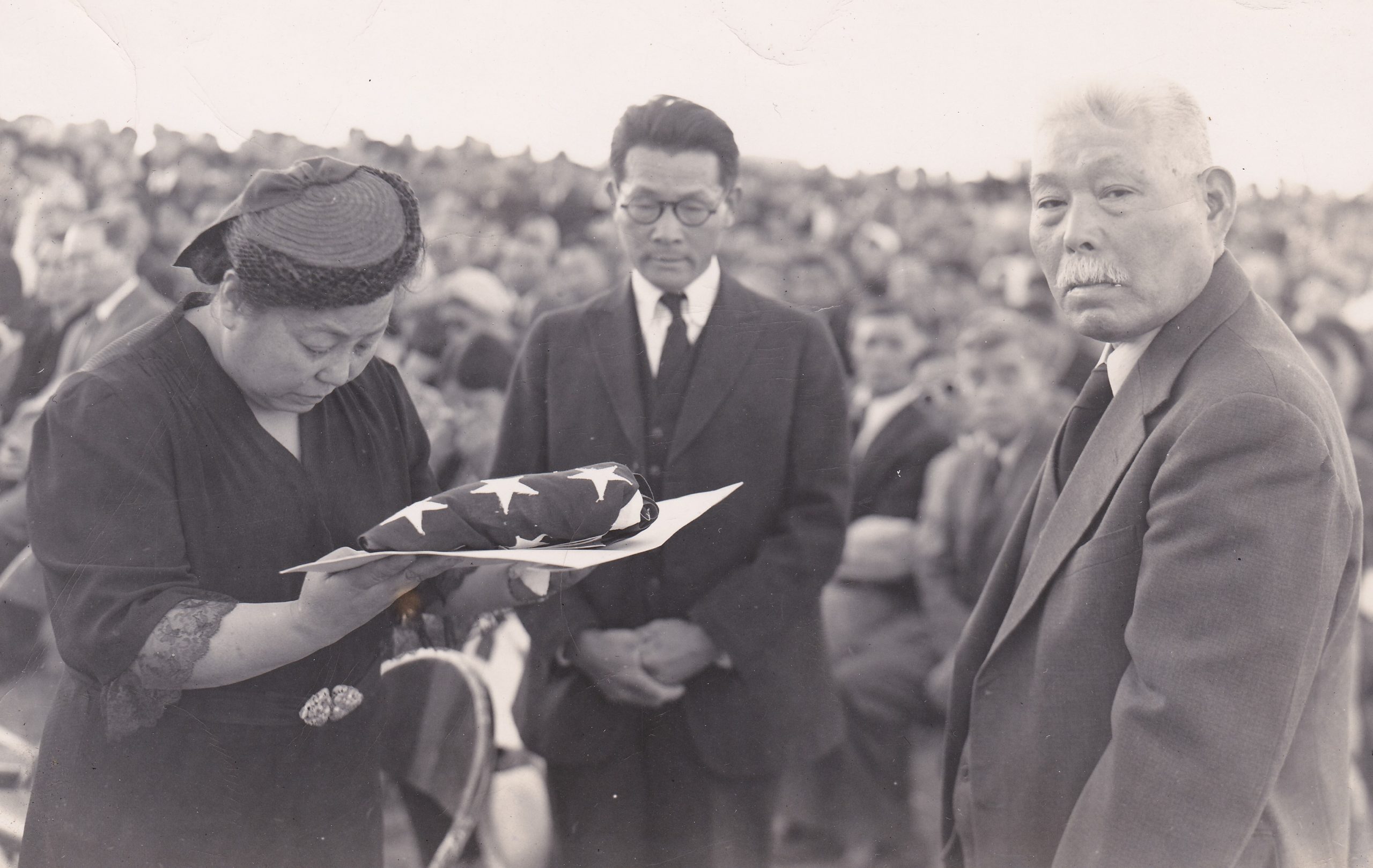 When Tom Ikeda gives presentations on the incarceration of Japanese Americans during World War II, he likes to show a black-and-white photo of his grandparents accepting an American flag in honor their son, who was killed by a sniper in Italy. Ikeda never met his uncle, who died fighting for the 442nd Regimental Combat Team, which was the most decorated unit for its size in U.S. military history, and made up mostly of Japanese American soldiers.

What’s not immediately clear from the photo is that, as they accepted the flag, Ikeda’s grandparents were incarcerated in Minidoka concentration camp (or War Relocation Center) in Idaho. And before he enlisted in the war, their fallen son had also been incarcerated, first at the Puyallup Fairgrounds and then Minidoka.

Ikeda, the founding executive director of the nonprofit Densho, never experienced life in the concentration camps himself, but his organization records the oral histories of those who did, and seeks to educate people. Ikeda has personally conducted over 250 interviews.

In August 2016, the parents of slain U.S Army Captain Humayun Khan famously rebuked Donald Trump at the Democratic National Convention for his xenophobic campaign. The Khans’ speech brought Ikeda to tears, as he wrote in the Seattle Globalist. The speech was something his grandparents could have said after they posed for that photo in Minidoka.

“Where I ache most is that my grandparents weren’t able to accept the American flag in Seattle,” Ikeda said in a recent interview. It was the city they immigrated to near the turn of the century. “They had to accept it in this dusty eld in a concentration camp. That saddens me that they were seen to be so dangerous that that’s how they were treated, when I know they weren’t. Going forward, I just don’t want another community to be treated that way. It’s just so not American.”

February 2017 marked 75 years since President Roosevelt signed Executive Order 9066, which led to the incarceration of an estimated 110,000 Japanese Americans, two-thirds of them U.S. citizens. It began in earnest on March 30, with 200 residents of Bainbridge Island rounded up by the military and put first on a ferry, and then a train, bound for the Manzanar concentration camp in central California.

“I grew up in the Japanese American community—it just didn’t make sense that the government did this,” he said. “But then you see how powerful the media and the government can be in terms of shaping perceptions. And it’s clear to me, it’s so clear that that’s what’s happening to the Muslim community.”

Ikeda points out that incarceration was preceded by decades of government policies banning and restricting Japanese immigration and preventing land ownership, as well as media and entertainment depicting Asians as a sinister, scary force threatening American values.

Arsalan Bukhari, executive director of the Washington Council on American–Islamic Relations (CAIR), points to nearly half of the American public—of all political persuasions—supported Trump’s travel ban.

Looking at this way, Bukhari argues, it wasn’t Trump who created the public will to ban Muslims or create a registry. It was there all along. Bukhari said that even if Hillary Clinton or someone else became president tomorrow, not much would be different for American Muslims.

“I think the executive orders might be the only thing that’s different. The hate crimes, and coverage, the portrayal, public sentiment, will continue on,” he said.

While Ikeda sees some hope in the willingness of American citizens to stand up to injustice if something similar to Japanese incarceration happened today, Bukhari is less optimistic.

“God forbid if there were ever a proposal for incarceration of American Muslims, the same public will probably allow for that action to be taken just as it was back then,” he said. “Back then it was the same ‘safer than sorry’ sort of mentality, again despite all facts on the ground, knowing that there were no Japanese Americans who were found to have been conspiring with that government who were arrested.”

Dee Simon, executive director of the Holocaust Center for Humanity in Seattle, urges caution when drawing parallels between history and the present day.

“I think the state of affairs right now is very different,” she said. “I do think … we should learn from history and we should be mindful of the incremental steps and build-ups that lead to discrimination and violence.”

Some of the steps that led to the creation of concentration camps in Europe also existed in the United States during World War II, says Simon, including prejudice and the willingness of ordinary people to look the other way. Opinion polls conducted during the Holocaust showed Americans were against accepting thousands of Jewish refugees, including thousands of children, for many of the same reasons people oppose immigration today.

“I think one of the lessons we can take away from history is our individual responsibility to stand up and do the right thing and not be bystanders as we watch history unfold,” says Simon.

Mira Shimabukuro, a lecturer at the UW who studies the Japanese American movement for redress for incarceration, agrees. For her, there are many lessons to learn about activism and resistance from this period in history. At the time, many Japanese Americans resisted incarceration and the draft, fought for for better living conditions in the camps, and later demanded redress.

“Folks have to understand our own collective power to organize and resist the impositions on our lives,” she says. And, “it’s important that we speak out for each other.”

Ikeda of Densho is also hopeful that ordinary people can stand up to injustice. He and Shimabukuro both point to the protests at Sea-Tac airport and around the country after Trump’s first travel ban in January. Within just a few hours of the order, hundreds of people had came to the airport bearing signs in support of immigrants and refugees.

“It’s amazing—this is not something that we would have seen in 1942,” said Shimabukuro. At that time, almost no one spoke up for the Japanese Americans being incarcerated. But today, she said, “there’s that kind of shared feeling of intense damage, that feeling that we’re in this together.”

For Ikeda, it’s up to individual people to stand up for justice because historically, when the country feels at threat, the executive branch often tries to override civil and constitutional rights. “I think the only thing that prevents these things from happening is a very active, knowledgeable group of individuals to fight back,” he said. For Shimabukuro, it’s important to remember that the incarceration was legal, and upheld by the Supreme Court.

To mark the 75th anniversary of Japanese American incarceration, the Wing Luke Museum opened a new exhibit based on the work of two men who spent their early years in Minodoka concentration camp. Lawrence Matsuda, a Seattle poet, was born in the Minidoka camp in 1945, and artist Roger Shimamura spent the early years of his life there.

Shimomura, whose artwork often deals with themes of racism and prejudice, thinks public opinion has changed for the better in some ways since the 1940s, with people now more aware of racism. But he’s alarmed by the connections between the racist attitudes that led to Japanese incarceration, and a federal government today seemingly motivated in part by white supremacy.

“Race trumped everything,” he said. “Everyone just sort of lost their senses and figured, well there’s only 120,000 Japanese Americans in this country, what rights and how much noise can they make? Years later it rears it’s head again, frightfully, and it shows that America is taking a deep breath and getting ready to do the same damn thing again.”

One of the messages of Matsuda and Shimomura’s exhibit is to not let it happen again.

Matsuda believes that because of their history, it’s the legacy of Japanese Americans to stand up against injustice. “For another group, it won’t happen in the same way that it happened to us—it’ll be a little different, but it’ll be the same flavor,” Matsuda said.

Though he sees hope in the way people stood up to Trump’s travel ban, Matsuda said there’s too much uncertainty about the way prejudice manifests to be blindly optimistic.

“Things have changed. But have things improved to the point that it wouldn’t happen again?” he wondered. “I read my poems in hope that America would live up to its promises. But with the current political climate, one can never say that we’ve made progress firmly.”