Seattleites have a milestone to look forward to: Korean contemporary art is being presented for the first time this decade in the Pacific Northwest at an exhibition in the city.

Paradox of Place at the Seattle Art Museum’s (SAM) Asian Art Museum, which began October 31, is co-curated by Xiaojin Wu, curator of Japanese and Korean art at SAM’s Asian Art Museum and a special guest: Eunju Choi, a veteran of the field who worked as the chief curator at the National Museum of Modern and Contemporary Art (MMCA) in Korea for 26 years, and earlier this year moved to become the director at Gyeonggi Museum of Modern Art.

Prior to commencing work on the Paradox of Place exhibition, Choi visited Seattle in late 2014 to host a panel discussion on Korean contemporary art, and was the first in-residence visiting curator sponsored by the Andrew W. Mellon Foundation at SAM.

Choi believes this exhibition in Seattle is very important. She explains that outside the American cities of Los Angeles and New York, the American level of knowledge about Korean culture is limited. In those two cities, there are large Korean populations, and people are more familiar with Korean cultural movements, art, and travel. As the first Korean contemporary art exhibition in this region of the United States for quite some time, Choi sees this show as a great opportunity to shed light on a new topic for Seattleites.

“At first, I did not know very much about Seattle, but little by little, I have been learning about the city, and the first characteristic that comes to mind is that it is a very progressive place,” Choi says. “Seattle is amongst the most progressive cities in the country, and it takes a progressive society to accept new and progressive concepts from elsewhere in the world, such as Korean contemporary art.”

Choi says Seattle’s progressive art scene has allowed for the curation of an especially poignant exhibition, that she knows the local community will appreciate.

“The six artists that were selected to be a part of this exhibition, from the many we looked through before coming to a decision, are especially progressive in Korea,” Choi says.

Within her position at MMCA, Choi observed the Korean contemporary art of the 1980s and 1990s, and has seen the lifespan of Korean new media trends, especially in the case of Korean video art. Choi sees importance in all mediums of art, because through them one can see the different dialogues about Korean contemporary society, art, and contemporary culture. Works in Paradox of Place will range from mix-media installations, to video art and photography.

Since art is a means for people to search for identity and reflect upon contemporary culture, and how the past has impacted this culture, Choi believes to learn about this field is very important in understanding a culture as a whole. With this being the first show of its kind for many in Seattle, attendees of the exhibition will be able to gain a better grasp on Korea, the country’s history, and Korean contemporary culture.

“This art reflects Korean social and political situations, the country’s industrialization, and how average citizens wanted to find their identity, as a contemporary people,” Choi explains. “And this situation was not only for the artistic field. The entire population really wanted to search for their identity in the newly realized contemporary atmosphere. Korean artists played an important role with their art within the quickly growing Korean contemporary society.”

The participating artists of Paradox of Place were chosen due to their work reflecting the title: their art presents a paradox, whether it is traditional and contemporary, personal and public, the present and the future, or angel and soldier.

“They all show the meaning of what a paradox is within their work,” Choi says. “These artists re-project peoples’ lives, contemporary history, and contemporary problems, within the Korean society, and the paradoxes that lay within all of these areas.”

Choi gives the example of artist Minouk Lim, who she believes expresses this paradox very well. Lim’s work is entitled, “The possibility of the half,” and is composed of two opposing video screens: the first shows North Koreans, and the second their South Korean peers. Lim uses her imagination to build upon the Korean film dramas she grew up watching. The images from these films, due to their frequency in South Korean popular culture, are permanently etched into the minds of every South Korean.

These films give a visualization of what it looked like in the war for those who were not there, but yet who everyday live with the fallout from it, Choi says. Lim did not experience the Korean war, Choi explains, because she was born afterward, but she knows very well about war, Korean division, and the differentiation between North and South Korea, because her father and mother experienced it. They in turn taught their daughter.

“She experienced the aftermath of it, and she can express this kind of ambience between North and South Korea,” Choi says. “In the case of Lim, we can learn a lot about Korea’s current situation, and its political division.”

Minouk describes her own art as carrying this message, one that could also speak broadly about the theme the entire show means to bring across: “The possibility of community does not come from the reigns of media and ideology, but the power of tears, and fears of fusing and breaking it down based on the solidarity of the common.” 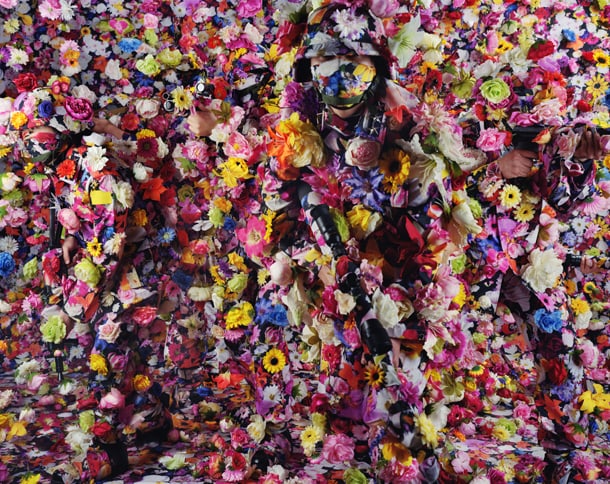