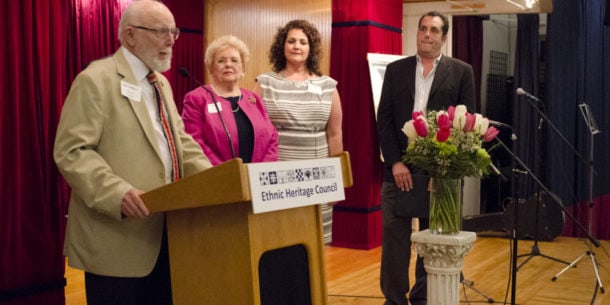 The Ethnic Heritage Council (EHC) announced the 2017 recipients of the Aspasia Phoutrides Pulakis and Gordon Ekvall Tracie Memorial Awards to be presented at the Annual Dinner and Awards Ceremony on Saturday, April 29, from 6-9 p.m. at the new Centilia Cultural Center on Plaza Roberto Maestas of El Centro de la Raza. Original Cuban music by Trovadoro will be performed on the Plaza beginning at 5:15 until 6:15 p.m.

Iraj Khademi and Estela Ortega are co-recipients of the 2017 Aspasia Phoutrides Pulakis Memorial Award established in 1983 for significant contributions to an ethnic community and to the community at large. The award is named for a revered founding member of EHC, of Greek heritage, who exemplified the organization’s mission.

Christos Govetas and Ruth Hunter, husband and wife, will receive the 2017 Gordon Ekvall Tracie Memorial Award, established in 1990 and named for a musician and documentarian, who devoted four decades to the study, performance and promotion of Nordic traditional music and dance. The Gordon Ekvall Tracie Music Library is located in the Nordic Heritage Museum of Seattle.

Iraj Khademi is a revered organizer of cultural events, a poet, writer, researcher and retired attorney, nominated by Professor Selim Kuru of the Turkish community, Associate Professor and Chair of the Department of Near Eastern Languages and Civilization at the University of Washington. Kuru describes Khademi as “the centrifugal force” that for 17 years has brought together Persian community members and Persophiles from far beyond Seattle in monthly workshops on poetry and music. Once a month as many as 150 people gather at North Bellevue Community Center for “Persian Poetry and Music Workshop of Seattle” (PPMWS) where adults and youth recite poetry and literature and perform music and dance. “Khademi also has been an important bridge between the University of Washington and the Iranian community at large,” says Kuru, “in building a legacy of Iranian and Persian speaking cultures in the Pacific Northwest.”

Estela Ortega is a phenomenon in the depth and breadth of her work for the “beloved community.” Nominated by Filipino community leaders Dr. Dorothy Cordova (winner of the first Pulakis Memorial Award in 1983) and Maria Batayola, she is described as a visionary leader. “Ortega’s work goes beyond the traditional arts and cultural preservation, documentation and presentation. Her work exemplifies a more complex form of cultural and language preservation through active engagement with immigrants, refugees and bi-cultural Americans in their respective cultures of origin . . .” For the Ethnic Heritage Council, Ortega is a model of how a community can value and preserve heritage and also create a physical center that provides programs and a gathering place for many. As executive director of El Centro de la Raza, she spearheaded the development of the new Plaza Roberto Maestas and Centilia Cultural Center, as well as two buildings for affordable housing, retail stores, and El Centro’s child development center.

Christos Govetas and Ruth Hunter, husband and wife, were nominated by performer and teacher of Balkan music and dance, Cheryl Spasojevic of the Serbian community. “Christos and Ruth have become my favorite band in the entire region,” declares Spasojevic. “They promote not just Greek music, dancing and song but are instrumental in organizing a variety of events highlighting Balkan folk culture, including Balkan Dance Café and Balkan Night Northwest.” Govetas and Hunter conduct workshops all along the West Coast and work extensively with youth, including the youth of St. Demetrios Greek Orthodox Church and Greek Church of the Assumption of Seattle. They have held workshops at the annual Greek youth performance competitions in California and accompanied Seattle youth performers to Greece. Versatile on a wide variety of traditional instruments, they have dedicated themselves to preserving and performing traditional Greek music and have a large collection of instruments and recordings going back to the 1920s. They have toured extensively in the U.S., Canada and Greece. Their two children Eleni and Bobby have absorbed it all and are now members of the band.

Performances for the evening will begin at 5:15 with original Cuban music by Trovadoro, continuing until 6:15 p.m. on the Plaza Roberto Maestas. Govetas and Hunter will perform a sampling from their Balkan repertoire after receiving the Tracie Memorial Award.