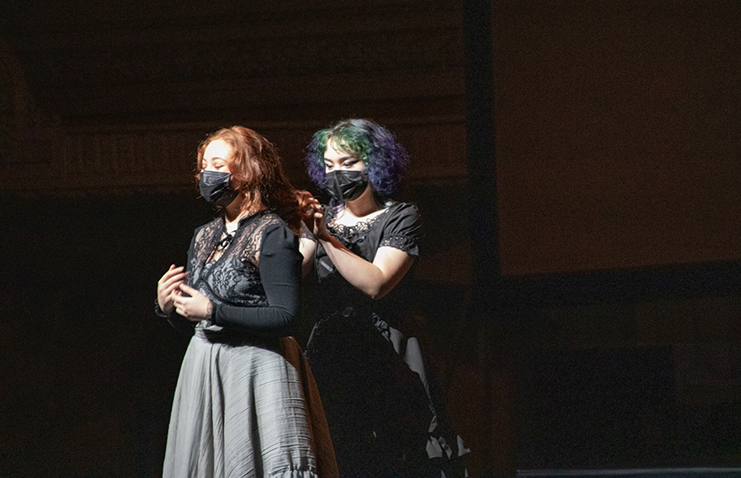 The first time I realized being Asian wasn’t the norm, I was five years old. I had brought mochi to school with my lunch, and one kid pinched his nose and commented about how weird my food looked. Almost every Asian kid I know has a story like this, a “lunch box moment.” This moment almost always happens for the first time in elementary school and occurs about a year or two before White kids start bringing seaweed to school as an “exotic healthy snack,” about five years before rich White kids start liking ramen, and about 10 years before everyone I know starts drinking boba and posting cute Instagram pictures of it.

Given how many other Asian and mixed Asian kids my age has had a lunch box moment, and given how adored Americanized Asian foods are now, I assumed that people would be over the nose pinching and weird looks. But yesterday, during an Addams Family themed party, there was a table of “Spooky Kooky Foods” that was made up almost entirely of just Asian foods. Shrimp chips and dried eggplant, right next to the peeled grapes made to seem like eyeballs. Shocked, I laughed out loud and asked who brought these foods, and of course, it was some White kid “appreciating Asian culture.” The same White kid who two days earlier had told me how much they hated privileged people and complained about how White their church was. The weird part about this was how accepted it was, by almost everyone. Even after everything I’ve gone through, I was still surprised when everyone else shrugged it off and laughed when the food was introduced as (no joke) “Miserable torture.”

The truth is that stuff like this happens nearly all the time. And don’t get me wrong, there are a lot of really amazing things about being Asian American, from the food to the festivals to the amazing people, Asian American will always have a positive connotation in my mind. But when it comes to the American part of Asian American, I always find myself full of resentment and anger.

There are a lot of things that I don’t often have to deal with since I’m mixed that most of my full Asian friends’ do experience. This ranges from the Model Minority Myth to name-calling, to the good old-fashioned offensive pulling the eyes back.

When you’re half Asian and rather passing, like I am, then it’s easier to fly under the racist radar of teachers, classmates, and random strangers. But since you’re still Asian, you still see it all happen, and it still hurts. And then there are things you only deal with if you’re mixed, like not being Asian enough or White enough or just being robbed of your heritage by people who are so used to White being the norm that they don’t see you for who you are, mixed. When I was starting an AAPI Student union at my school, I asked for a list of the Asian students at my school so I could reach out to them, and when I got the list, I wasn’t on it. Later I found out that this was because I marked Asian and White on some survey, and so in the eyes of my school, I was just White.

Things almost all Asian people have to deal with, mixed or not, ranges from modern-day sexualization and cultural appropriation to harmful educational disparities.

If you’re Japanese American and have family that went to the prison camps during World War II as I do, then maybe you vividly remember having to sit through a grade-wide argumentative essay on whether or not your family deserved to go to camp. Other than the short chapter explaining what the camps were like, the classroom focus was mainly on why the U.S. Government decided to send Japanese and Japanese Americans, send literal children, to prison camps. Lucky for me, my mother was furious at this, and confronted my seventh-grade teachers and changed the writing prompt. Not everyone is as lucky as me though, and I’m sure a lot of kids had to listen to their classmates play Devils Advocate about why our Japanese family deserved to go to jail for being Japanese.

A couple of years back a guy I was seeing (who was really into anime) told me to put my hair up in pigtails “just because” and hold them up in a cute little way. I didn’t know what to make of it, he might’ve just thought it was funny, but I remember thinking maybe it was because he thought the anime schoolgirl thing was hot. My face turned pink, and I left. I know a lot of people who love anime and K-pop and as someone who grew up on good music and Studio Ghibli, I get it! But in a weird way, I’ve sort of trained myself out of liking all of these popular Asian things. I’ve seen too many girls wearing lingerie and dancing like anime characters to J-Pop, too many girls doing their eyeliner to look more Asian and wearing anime porn on their hoodies and talking about what “cute bunny girls” they are, and too many guys who are a little too into anime to enjoy any of it myself anymore.

Last year, around May 2021, when lots of people cared about anti-Asian hate and violence for about 26 seconds, my school did a homeroom powerpoint to “spread awareness.” At first glance, this might sound great, because at least Asians are making it into the curriculum, but right away the only other Asian girl in the class and I exchanged fearful glances, and sure enough halfway through it though the two of us found ourselves in tears. The presentation started with a whole slide dedicated to extensive statistics on anti-Asian violence; so and so many Asians experience a hate crime a year, so and so many Asian elders are killed for being Asian a month, and so on. I remember at the time my family decided that my dad would be the only one going out of the house for groceries or walking our dog because we were genuinely scared for my mom’s safety. I remember being terrified of hearing that one of my aunties or uncles had gotten attacked. Our school had thought that they needed to prove to all the non-Asian kids that anti-Asian violence existed, but the Asian kids were already aware, and terrified.

Following the slide proving anti-Asian hate existed, we had a “community circle” which mainly consisted of White kids talking about their racist family and how bad they think racism is. At this point, my friend and I had been texting each other throughout and even called crying to each other. I don’t know what was on the rest of the PowerPoint because at that point I told my teacher I needed to leave, and she sent me and my friend into a separate room with a very scared White woman who tried (and failed) to console and pacify our anger.

Unconsciously like my mother, I went to confront my teachers about the situation, and I spent an hour talking to my educators and explaining how harmful this experience was. I remember having to sit in a room by myself with two teachers, one of whom was mixed like me, and tell them that I had practically broken down in the middle of class because of what they’d done. They were understanding and apologetic, but they also had an expectation that I, a 15-year-old high schooler, had the answers to how to talk about race. I care a lot about what my teachers think of me, I always have, but for the first time I was forced to see that they had the power to hurt me, and the more I spoke up (intentionally or not) the more they would.

After this experience though, I was allowed to hold an affinity space. Only a few people showed up, but out of those few people, four lunch box moments were shared, and a few months later a Student Union was formed.

Our school’s first Asian American Pacific Islander Student Union. And I was proud.

Almost a year after that PowerPoint, we now have monthly meetings. For the most part, it’s just a bunch of Asian kids eating good food and trash-talking racist White kids, but it’s a space where we feel at home. We share our varying experiences both about being Asian and our general life, and recently we made the life-changing discovery that drinking Calcipo through an off-brand strawberry Sticko straw makes for a delicious fizzy sugar drink.

Being in this space we allow ourselves to get mad and disheartened and empowered, and we help each other through all the things that the American in Asian American throws at you. And we celebrated all the wonderful things the Asian in Asian American gives you. In a world where White is the norm there’s something really powerful about being around people like you.

When you grow up only seeing yourself on TV as the nerdy awkward kid with glasses, it’s easy to put yourself in that box. But when you’re around other Asian people, real people with hopes and dreams (that go beyond going to college five years early, ahem Bunked the TV show) and fears and flaws, you start to slowly allow yourself all those things too.

You’re allowed to get angry, like really angry, at all the little things that none of your non-Asian friends would ever understand and you’re given a chance to mourn all the things you’ve lost and missed out on, not because you’re Asian but because you’re in America. All the homework help that might’ve been offered to you by teachers who see it when you’re struggling, all the inspiration you might’ve been able to access on TV if the only person who looked like you wasn’t a one-dimensional book bag, and so much more.

Even if you don’t have an AAPI Student Union, or even go to school, it’s still powerful to find people who have had to deal with similar things that you have and just talk with them. Unless you’ve already taken the time and healed from your racial trauma, inside you there is probably an inner child, who’s still scared to bring mochi to school with your lunch, but when you sit with the other people who also have sushi and adobo that inner child starts to feel less scared, and they start feeling accepted.

I’m here to tell you that your food isn’t gross or weird, and you’re more than a walking book bag. And if you ever get a chance to be in a Student Union and trash talk boba drinking seaweed eating racist White kids, please take it. It helps.