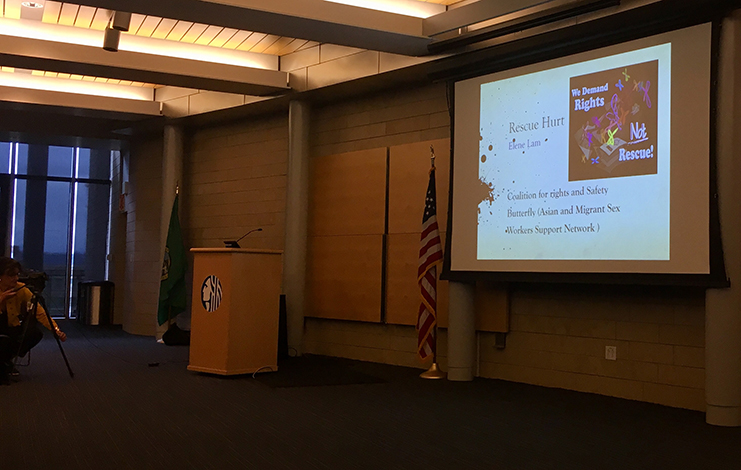 Last month, dozens of community members gathered in the Bertha Knight Landes Room at Seattle City Hall to discuss consequences of the large-scale police raids on 11 so-called ‘Asian’ massage parlors back in February. The months-long sting operation resulted in the “rescue” of 26 Chinese-speaking women employed in the sex industry at parlors located across the Chinatown-International District (CID) and Beacon Hill neighborhoods.

According to Elene Lam, however, this kind of rescue narrative misconstrues the nuanced realities of the sex industry, often creating irreversible ramifications for the workers involved if handled improperly.

Lam is an expert at the Toronto-based organization Butterfly, a support and advocacy group for Asian and migrant sex workers. The event in August, called Rescue Hurts, was organized by API Chaya and other local advocacy initiatives to correct misinformation around sex work and to propose alternative solutions that do not rely on state or police intervention

“There are massage parlors across every city in the U.S., and yet there is only one narrative: everyone is a trafficked victim,” said JM Wong, an organizer with the CID Massage Parlor Outreach Project. “There is never mention of why these individuals chose sex work or what other options may have been available to them. There are no complexities in their stories and that reflects the racism of this country. Here, we are trying to support these workers.”

Soon after, Lam took to the podium for her presentation. She began by describing her organizing history with the sex work movement over the past 20 years. Social and legal support, she said, is of utmost importance. Challenges vary from place to place, but for many sex workers, law enforcement is a major source of oppression rather than one of safety.

Over the years, Lam has learned how to act in the best interest of the sex worker: listen closely to understand reality before making assumptions.

“We rarely learn true stories from the media,” Lam said. “We need to start from the point that a worker is human. No matter what our moral judgement is, the human being needs to be respected. This can help take away our bias. We cannot let the controversy around sex work prevent us from doing the right thing.”

Migrant sex workers comprise an estimated 50 to 60 percent of sex workers globally. More often than not, Lam said, the types of challenges faced by a sex worker are largely impacted by their race and class. She gave an example of how white sex workers in Thailand are afforded a much more comprehensive set of labor rights and protections. By contrast, because of racism and language barriers, the Asian worker does not have the same platform to tell their story.

Lam then outlined the many reasons this migration occurs. No matter one’s immigration status, race, class, gender, or physical ability, the circumstances of a sex worker are diverse and fluid. Sometimes it’s the exchange of sexual services for money, food, accommodations, status, or safety. Some people don’t identify as a sex worker because of the stigma and criminalization, in fact, the term ‘sex worker’ is typically imposed by those outside of the industry.

“We often assume that these people don’t have agency, but actually what we often see is that many choose sex work in massage parlors because they can decide what kind of service they want to offer,” said Lam. “We always think of Asian women as passive or naïve victims, but there are reasons for their choice: economic advancement, self-actualization, the pursuit of dreams, or survival. Sex work may be the only or best option.”

In reference to the February raids, Lam explained why framing the operation as a rescue mission feeds into and affirms racist ideology: “Who really benefits when the social worker or the police are the heroes? The media has more stories, the police gain more credibility, and the only person that does not benefit is the worker herself.”

Society fears sex, Lam said, and that is what makes these raids so successful in the public eye. It is true that for some, sex work can be oppressive, but for others it is a way to gain support, resources, and autonomy from other kinds of oppression like domestic violence. Sex work is still work, she emphasized. The rescue narrative criminalizes the job, further restricting the already-limited options available to these individuals. Lam described it as “very savvy public relations.”

While it is true that sex workers can be human trafficked, it is the unquestioning conflation of the two that can be dangerous, an assumption informed by xenophobia, racism, and myths of the migrant sex worker. The conflation can also push these individuals deeper underground, increasing their precarity. State-sanctioned anti-trafficking investigations and the media coverage that accompanies them are quick to classify these women as either criminals or victims.

Neither narrative supports the sex worker.

“We don’t criminalize the worker at McDonalds who is being exploited or the football player when we see his salary compared to the owner’s pay,” Lam said. “Why do we support raids on sex workers? Because it’s controversial. Under capitalism, any industry is exploitative.”

Lam shared accounts from several workers involved with Butterfly, where they describe their experiences after the state interceded. One Butterfly worker described requesting translation services but being denied, placed in handcuffs, and detained. A different woman chronicled her experience of being jailed for 35 days and strip searched five times.

“I was locked by chains and weights on my wrists and legs. I felt like I was being treated as a murder suspect,” reads another account from Mimi, a Butterfly worker. “They did not allow me to make a phone call or contact other people.”

Canada’s federal police (RCMP) then seized $10,000 CAD in assets from Mimi, including all of her personal belongings and communication devices. This kind of treatment is not uncommon.

In recent years, federal, provincial, and municipal governments have made concerted efforts to develop and implement anti-trafficking policies. For example, the province of Ontario committed $72 million to combat trafficking in 2016. Public Safety Canada committed $6 million. The majority of this money is allocated to law enforcement agencies like the RCMP and the Canadian Border Services Agency (CBSA.)

Closer to home, it was revealed last year that the King County Prosecuting Attorney’s Office received more than $140,000 from Demand Abolition, an anti-prostitution organization. These links are not an accident, according to Lam. To her, they reflect how both the state and the police are guided by anti-sex work, anti-migrant, and racist ideologies.

Following a quick question and answer, the Rescue Hurts event ended by Lam urging people to learn more about migrant sex work and to ask themselves the right questions about how best to support sex workers, how best to create safer options for them to choose from. A full abandon of biases is essential, she argued, specifically around Asian women, exploitation, and sex.