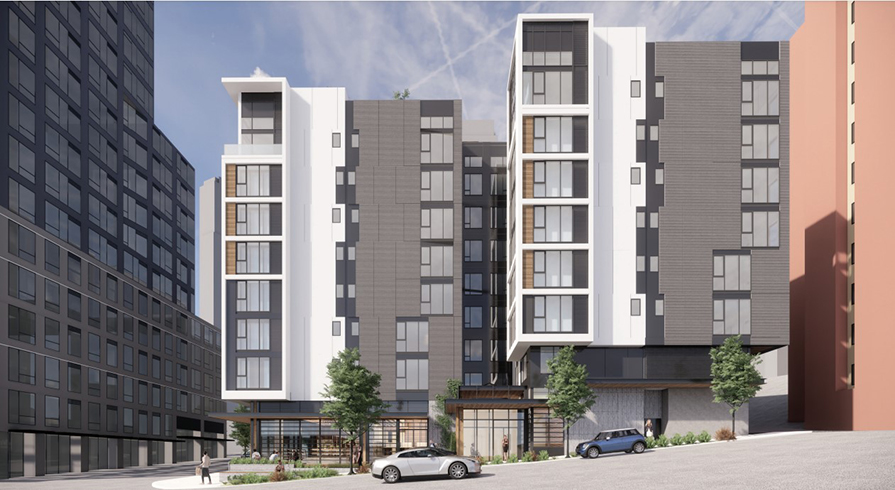 The International Special Review District (ISRD) board voted to approve plans for Blossom, an 8-story residential development with 184 housing units and ground floor commercial space, during a meeting on June 28.

The project is proposed on 5th Avenue and S. Main Street, across the street just east of the Koda condominiums, and just north of the proposed Fujimatsu Village project. The developer is Vibrant Cities, with Link Design as architect. Vibrant Cities has built projects in Seattle and Portland, and in the Chinatown International District (CID) is in the design phase for Jasmine, a controversial 17-story residential and retail project that would be built on the site of the former Bush Garden bar and restaurant.

After just one meeting, the ISRD board voted to approve the proposal for the Blossom project on the condition that the team come back with some adjustments to the design west-facing facade, such that the bay windows do not protrude outside the property line. This departure, or exception, was requested by the developer in the original application.

Normally, a developer will present different stages of a design in multiple ISRD board meetings, showing how they are responding to feedback from the board and the community. Unusually, Link Design and Vibrant Cities bypassed this process and presented a complete application to the board in the June 28 meeting, including proposed demolition of the parking lot and one-story office building on the site, construction of the building, and details about finishings and street improvements.

The project was presented “without Board input and without input from a range of community stakeholders within Japantown/Nihonmachi neighborhood to help inform the final design,” according to staff analysis included in the meeting materials.

While the site is now a parking lot, it is located in historic Nihonmachi or Japantown, and once contained the Great Northern/Dimond and the Japanese American Hotel/Belmont, two SRO hotels demolished in 1968 after fires.

The hotels provided some 140 housing units for a working class, multi-ethnic clientele, and businesses on the ground floor served the Japanese American community. The developers made comparisons between the former projects and the future Blossom project, whose housing and retail they said would improve the neighborhood.

One goal of the project is to “attract small businesses with meaningful ‘roots’ in the district”; another is to add to the housing diversity of the neighborhood and bring in residents to support small businesses, according to presentation materials prepared by the developers.

Ming Fung, president and co-founder of Vibrant Cities, said that though the team submitted a complete application, it still reflects community input over the last 17 months.

According to the presentation materials and the ISRD meeting, the developers met with representatives from SCIDpda, CIDBIA, the Chong Wah Benevolent Association, and board members of Interim CDA (not all of whom have necessarily endorsed the project), and held a virtual open house in October 2020 with 27 attendees.

The zoning would allow the building to be as tall as 270 feet, like the 17-story Koda condos nearby, but the team decided to build just eight stories and have the units at workforce housing prices. The units would be small, most 350 square feet.

The goal was to create more relatively affordable housing for people like teachers and government employees who want to live in Seattle but struggle to afford market-rate prices, said James Wong, CEO and co-founder of Vibrant Cities, during the meeting. Units would be priced between 60 and 80 percent of Area Median Income (AMI). For a household of one person, 60 percent of AMI is around $54,400 per year, according to the Seattle Housing Authority, and $62,160 for a two-person household. 80 percent of AMI is around $72,500 a year for a household of one, and $82,880 for a two-person household.

To honor the history of Japantown, the project would incorporate Japanese-inspired architecture, design and landscaping, including drawing from the concept of wabisabi, said Wong. The presentation quotes Tadao Ando defining wabisabi as “the Japanese art of finding beauty in imperfection and profundity in nature.”

This meant building design that celebrated the passage of time, found beauty in asymmetry, and drew inspiration from the Japanese screen and contemporary architecture, according to the developer presentation. Landscaping elements proposed included weathered rocks, a bamboo grove, and cherry trees in the sidewalk.

Board members Ming Zhang and Lizzy Baskerville said the eight-story height of the project fit well with the context of the surrounding buildings.

Baskerville said she was not comfortable with the lack of community engagement during the project’s design, and that the long, single meeting for the project created an excessive amount of information to take in.

Board chair Andy Yip said it is rare for a developer to submit a complete application for a project without conducting prior briefings, and he would have wanted to see more community engagement. However, in the case of Blossom he didn’t feel it would have significantly changed the final application.

If the project was closer to 18 stories and 300 units, he would have wanted the developers to seek more community engagement and board feedback through a longer process.