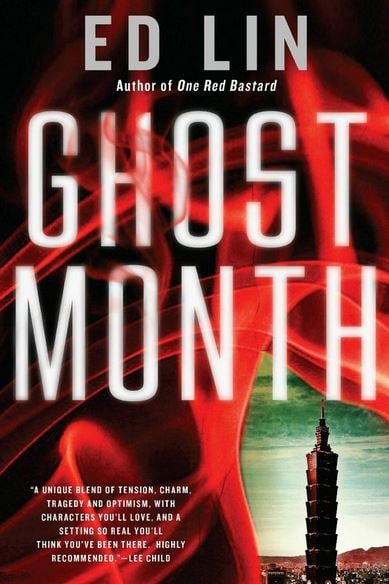 Set in modern-day Taipei, Ed Lin’s new crime novel, Ghost Month, explores the global megacity and its rich past as the locus for an elaborate murder mystery. When Jing-nan (“Johnny”) discovers his childhood sweetheart Zheng-lian (“Julia”) has been murdered at a roadside stand while working as a betelnut beauty, he investigates the circumstances of her death, taking him on a journey that brings him into the heart of cross-strait tensions, dirty real estate deals, love hotels, local gang warfare, and patronage.

Unpacking Taiwanese identities through the development of his characters’ storylines, Lin paints a complicated picture of Taipei’s residents. A college dropout who studied briefly at UCLA, Johnny now runs his parents’ food stand at Shilin Night Market, where he ekes out a living to pay off a gambling debt incurred by his ancestors. When his parents pass away leaving him the family business, Johnny changes the name of his family’s food stall from “Tastes Good” to “Unexpected Pleasures,” a nod to his love for the band Joy Division’s first album. Finding comfort in British post-punk and new wave groups like the Cocteau Twins, The The, and New Order, Johnny’s passion for music forms the foundation of his evolving relationship with Nancy, a former high school classmate who he reconnects with at an indie record shop. Nancy and Johnny quickly fall into bed together, despite Johnny’s obsession with Julia’s death.

Johnny’s co-workers at Unexpected Pleasures include Dwayne, a half-aboriginal who rejects modern Taiwanese society. Dwayne turns down a baseball scholarship to embrace his indigenous roots through working at a “traditional” Amis village, where he is expelled when he questions the residents’ profit-making performance of culture and encourages peers to unionize for better wages. As a child, Frankie the Cat emigrated from the Chinese mainland with Chiang Kai-Shek and his Chinese Nationalist Party. Separated permanently from family, the orphaned Frankie grew up to work as a frogman for the Kuo Min Tang (KMT) until being falsely accused of Communist associations. The government shipped Frankie off to the infamous Green Island where scores of political prisoners disappeared under Martial Law.

Lin’s female characters both play to and against stereotype. Nancy is a young student with a shady past and penchant for cosplay, as the pampered former mistress of a tech executive who goes to jail for selling trade secrets to China. Western-educated divorcee Peggy Lee represents the privileged nouveau riche, as a greedy real estate developer who cuts deals to drive business owners away from Shilin Night Market. Only Johnny’s murdered love interest, Julia, subverts expectations when the circumstances surrounding her death are finally revealed.

The novel’s most engaging character is the city of Taipei itself, which comes in and out of focus throughout Lin’s story. Gonguang’s decaying KMT housing projects are juxtaposed against the architecture of Taipei 101—once the world’s tallest building. Lin guides the reader through the city’s diverse neighborhoods and landmarks, weaving through the red light district of Wanhua, Da‘an Forest Park, and Longshan Temple. The regional cuisine of Taiwan also makes regular appearances with references to hotpots, zhajiangman noodles, Buddha head fruit, stinky tofu, and xialongbao—soup dumplings made famous by Taipei eatery Din Tai Fung.

Recent historical events shaping Taiwan, including the 921 Earthquake and the imprisonment of former Taiwanese President Chen Shui-bian also inform the climate of the book. Lin unpacks the tensions between Taiwanese “yams” (residents who relate to a Taiwanese identity) and Chinese mainlanders, in a narrative that highlights decades of political corruption and patronage.

Though occupied with contemporary Taiwanese identities and concerns, Lin sets his story against the backdrop of Ghost Month, the seventh lunar month when the doors to the spirit world are believed to open. Cast as a period of mourning and ancestor worship when even the most educated of Taiwanese people make offerings at temples, Ghost Month is jokingly referred to as “National Pollution Month” due to the nation-wide increase in incense burning. As a staunch atheist, Johnny is called to re-evaluate his faith, or lack of it, to come to terms with his relationship to the dead.

While Lin’s latest literary offering shows a well-researched understanding of Taiwanese identities and contemporary issues affecting its capital city, Ghost Month overflows and overwhelms with history, obscuring its present-day narrative in a way that makes the novel’s main characters feel less engaging in their experiences than the book’s secondary characters who suffered through and live with the burden of Taiwan’s past.