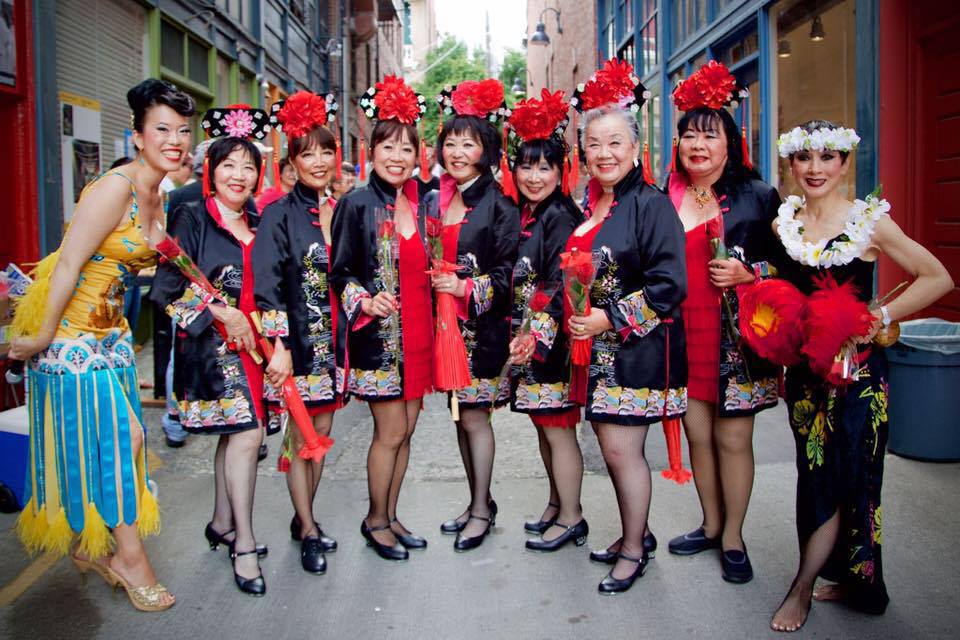 When I got a press release on an event entitled “A Night At The Forbidden City – An Intergenerational Cabaret & Variety Spectacular” (set for Sunday, June 24 at Seattle’s Theatre Off Jackson), my interest was piqued and I wondered if it had anything at all to do with the original club in San Francisco’s Chinatown. The Forbidden City was a Chinese American night club and cabaret on Sutter street between Chinatown and Union Square. It existed from the late 1930s to the late 1950s. The club employed Asian American singers, dancers, chorus lines, magicians, strippers and musicians. In its heyday, it attracted military personnel who were transiting through the city during WWII as well as Hollywood personalities like Frank Sinatra, Humphrey Bogart, Lauren Bacall and Bing Crosby. It was considered the Asian American equivalent of the Cotton Club in New York’s Harlem. Performers played to a mostly white audience and for many, it was their first exposure to Asian Americans. Some  critics felt that acts played up to the exotic stereotypes of ethnic Chinese or the sensuality of the “China Doll” stereotype.

Writer Tina Robbins saw it from a slightly different perspective. “They mostly did American-style music and dance. The women would do this thing where they would come out in a long Chinese robe looking very gorgeous and traditional, looking like the stereotypical image of a beautiful Chinese woman. Then they would throw the robe off, and underneath it would be a cute little dancing outfit.” Owner Charlie Low tried to attract customers by nicknaming performers after famous personalities like billing a gifted singer like Larry Ching as “the Chinese Frank Sinatra”  even though he didn’t sound like “Ol’ Blue Eyes”, he just had a good singing voice. Still many Asian American musicians, actors and performers got their first break performing on this stage as opportunities to perform on a mainstream stage were scant or non-existent. The comic Jack Soo (who was actually Goro Suzuki, a Japanese American who changed his last name when he worked  in a Chinese nightclub) got his start here and would later have roles in “Flower Drum Song” and the TV comedy “Barney Miller.”A novel based on the club was later turned into a musical and then a film called “Flower Drum Song.” Years later, Tina Robbins did an oral history of performers at the club and published it in her book entitled “Forbidden City: The Golden Age of Chinese Nightclubs”. And more recently, filmmaker Arthur Dong did a documentary film on the history of this club entitled “Forbidden City, U.S.A.” with many of the original cast appearing in the film. Dong followed that up with a book on the club and its performers.

In a brief interview with The Shanghai Pearl, who has performed on the West Coast for years as an internationally known burlesque performer and instructor known for her appearances at Teatro ZinZanni, I asked how she came up with the idea. She told me that the program was indeed inspired by the San Francisco club and moreover, one of the headliners is going to be “The Grant Avenue Follies” which consists of headliners and chorus girls who danced at the original Forbidden City and other Chinatown clubs. When I asked her how she found the performers for this show, she told me they were fellow performers she had met and had community with and relationships with during her 15+ years in the entertainment industry. She promised that the audience was in for a treat. “The show will be so full of so much goodness! You can expect live jazz, dazzling costumes, spectacular aerial arts, singing, dancing incredible magic acts, comedy and so much more from an all Asian Pacific American cast.”

Below is a run-down of the cast of performers. Magician Nash Fung weaves magic, mind tricks and his experiences as an immigrant into his show. He’s been seen on King 5 and Penn & Teller’s “Fool Me!.” Award-winning performing artist/director/activist Sara Porkalob will perform selections from her popular “Dragon Lady” performance piece, a hysterical, moving new musical portraying what it means to be brown, poor and newly American. Multi-disciplinary circus artist Patricia Charms, a “Stilt, Strip, & Pole Sensation” from Portland will delight and dazzle with her infectious, happy energy. Aerialist Vivian Tam mesmerizes and amazes as she defies gravity with strength and grace. Contemporary dancer & activist MOONEYKA (Au Collective, Lil’ Brown Girls Club, Remix), the recent recipient of a 4Culture grant and upcoming performer at On The Boards will bring the future with her hip hop moves. The Shanghai Pearl brings her sophisticated burlesque act to the stage. Hyacinth Lee & Satira Sin are Portland based burlesque  performers. Hyacinth Lee is known as one of the Rose City’s best burlesque performers. Satire Sin is known for her tantalizing vocal stylings and spicy bump and grind. And to go back in history, The Grant Avenue Follies are coming from San Francisco. These living legends from the golden era of burlesque are the real deal. These ladies are dancers, chorus girls  and headliners  that danced in the original Forbidden City and other Chinatown  nightclubs in the 1950s and 60s. Trina Robbins in an interview with Lisa Hix on the Collectors Weekly website described them this way. “I’ve taken dance classes in San Francisco for at least 20 years. In the one dance class, it was me and mostly a bunch of very conservative older Japanese women. Then one day, these four Chinese women suddenly appeared in my class. They were older, too, but maybe not as old as the Japanese women. They were absolutely not conservative. They were beautiful. They had fabulous legs, and they were great dancers. And I was like ‘Who are these women?’ Eventually I found out they had danced in San Francisco’s famous Chinese nightclubs whose lifespan was from 1937 to 1964.”