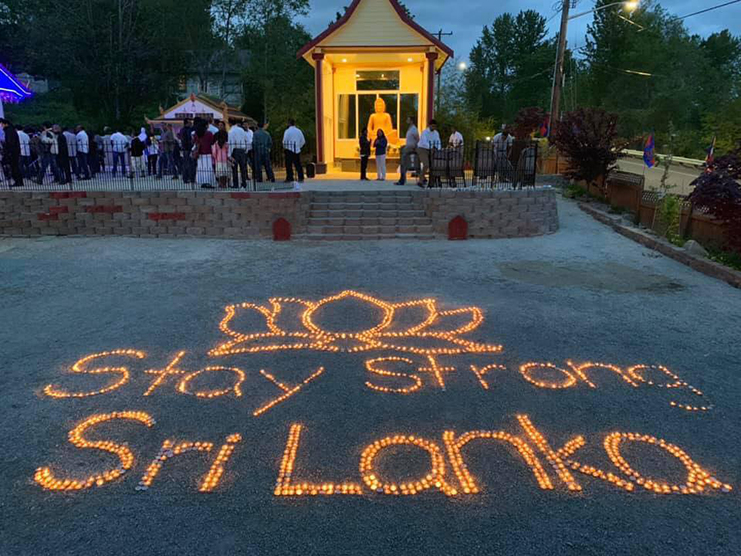 On Easter Sunday, the world was shocked by bombings in Sri Lanka that killed 253 people and injured hundreds more.

Polwatte Pagnannda, leader of the Sarana International Buddhist Center in Tukwila, learned of the attacks from the BBC World Service.

“I was so sorry for who ever lost their lives, no matter Christian, Buddhist, Muslim. I was so sorry about their life and suffering,” said Pagnannda, who also leads a Buddhist center in Sri Lanka.

On the evening of April 26, the Sarana International Buddhist Center held a memorial service and blessing ceremony for the victims of the attacks. People attending arranged tea lights on the grounds of the Center to spell the words “Stay strong Sri Lanka.”

The Center, which commonly receives visitors from southeast Asian communities, is the only temple with Sri Lankan monks in the Seattle area, and a regular gathering place for around 100 Sri Lankans, Pagnannda said.

Ajith Ranabahu, a caretaker and community liaison for the Sarana International Buddhist Center, was “completely horrified” to hear of the attacks. He was immediately worried about his friends living in Colombo, Sri Lanka’s capital city, which was targeted in the attack. The grandmother of one of his friends narrowly escaped one of the bombings, with an injury.

Ranabahu said the attacks shook the small Sri Lankan community in the Puget Sound area, which he estimates is 500 to 700 strong living in Redmond, Federal Way, Renton, Bothell, Everett and other cities.

“Most of my friends who are Sri Lankan are very much in disbelief and shocked,” Ranabahu said. “Nobody had any clue that something like this can happen.”

Now, people fear there will be more ethnic violence, Ranabahu said. And while before this Sri Lanka had a good reputation, “suddenly within three days, all that has gone away.”

The attacks took place at three churches and some luxury hotels in three cities, and seemed to target tourists and members of Sri Lanka’s Christian minority.

Sri Lanka’s civil war, which ended in 2009, had religious and ethnic tensions, as it was fought mostly between Hindu Tamil and Buddhist Sinhalese groups. But religious violence of this kind is shocking, Ranabahu said.

According to the Sri Lankan government, the attacks were carried out by seven suicide bombers, Sri Lankan citizens associated with National Thowheeth Jama’ath, a militant Islamist extremist group suspected of having ties to The Islamic State.

Ranabahu said most Sri Lankans he knows have Muslim friends. “We joke, we call up each other and all that.”

The fact that some of the attackers studied in the U.K. and Australia is hard to fathom for Ranabahu, who himself left Sri Lanka to study and work in the U.S. in 2006. “I’m like that…A person like me, I don’t know how they were radicalized, I don’t know how they made up their mind to go and do this. It’s really horrifying to think about.”

The vigil on April 26 was multi-faith, to demonstrate the unity of all human beings, said Pagnannda. “Every human being, good people want peace and happiness. In the meantime, some terrorist people do this, but we have to keep harmony,” he said. “We have to think of everybody as human being,” Pagnannda said — even members of ISIS. “We have to give them kindness, love, compassion.”