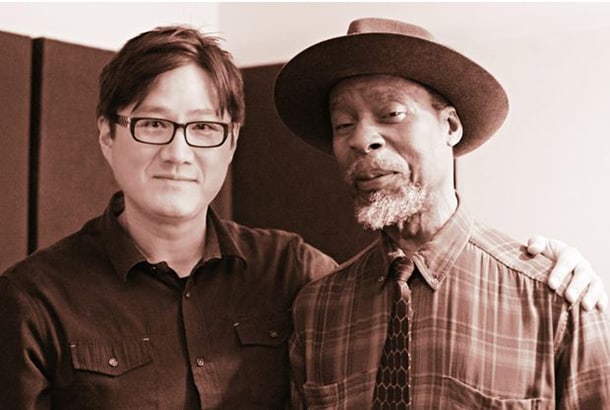 “It’s about to get moody in here,” said Don Farwell, audio engineer and owner of Earwig Studio in Wallingford, just before flooding his studio’s live room with pink and blue fluorescents. His words could not have been more meaningful. Last Friday, Farwell hosted the political launch of Seattle pop/rock quartet Warren Dunes and release of their single “War Cry.” The room was packed with a diverse crowd of over 50 people for Earwig’s first ever in-studio concert and benefit.

I dare you to tell us not to sing

When we’re riding on the pendulum’s next swing,

I wonder what the future’s gonna bring

Warren Dunes—comprising Julia Massey and her husband Jared Cortese, Jared’s brother Dominic Cortese, and bassist Matt Deason—was formed about a year ago with unique vision. “When the [presidential] election came around we were all just reeling,” says Massey. “It became immediately apparent that many organizations were either going to partially or completely lose funding.” Massey says her and fellow players wanted to become artists who make a difference. They decided half of all Warren Dunes proceeds would go to organizations serving vulnerable populations chosen by members of those populations. ““Who has the finger on the community pulse,” explains Massey, “gets to decide where the money goes.”

Don Farwell, who is mixed-race Japanese American, donated his time and space, which allowed more money to go to the beneficiary. Earwig Studio represents one of very few people-of-color-owned-and-run recording studios in the city. Farwell says he told Warren Dunes if he was going to host the fundraiser it was very important to him that it center on people of color. “Last thing I wanted was all-white performers and an all-white audience raising money,” he says. “That’s not how change is going to happen. Black voices need to be heard.”

The goal of uplifting Black voices Friday evening was profoundly realized. Singer-songwriter Reggie Garrett opened the night with a stunning acoustic set that included his Black Lives Matter song “So Far Away.” “In his hand he flashed a gun,” Garrett sang, “or could it be you only thought you saw one?” Garrett recently penned the song, he told the audience, because he did not hear a lot of musicians in his genre writing about the movement. A single tear rolled down his cheek when he finished performing it.

And you don’t know just who I am

And you never really gave a damn.

Still I can’t believe that you shot me dead

—Reggie Garrett, “So Far Away”

Over the last few years, Garrett says, seeing so many protesters wearing Black Lives Matter T-shirts and holding resistance signs all over the country, he has wondered, “Is this what it’s going to take for people to finally start figuring it out?” But Garrett is encouraged and feels people are indeed finally starting to see “it’s not just me; it’s not just you; it’s not just them—it’s all of us.”

Chris Blount, father of two, says he picked Urban League of Metropolitan Seattle as the night’s beneficiary because he wanted to support Black Lives Matter and especially local Black youth. “I really want to promote positivity because I feel kids need to see positive reflections of themselves,” Blount says. “I’m big on building towards the culture and promoting education . . . and protecting the culture.”

Gentlemen of Leisure guitarist, singer and frontman Sphinx Akashaa Duncan, also a father, concurs. “For me it’s about not giving in to all the negativity,” Duncan expounds. “Showing that we can be a force for good in spite of the things that are happening out there. … It’s fantastic to be able to get people out here and have everybody here for a common purpose.”

I’m becoming everything I knew I’d be.

I’m doing everything I’m proud to do.

Cause I can be

The night, of course, closed with headliner Warren Dunes who filled the room with their passion, talent, and unbelievable precision. Yet despite many years of performing, this benefit launch at Earwig Studio, says seasoned musician Julia Massey, is like nothing she has ever done before. The commitment and dedication to a cause in solidarity with others made it something really special. “I was floored with how well it went,” she beamed post-show.

“If people in [the] audience haven’t seen people of color perform—which happens a lot in Seattle,” she adds, “then I hope it opened their minds to support artists from different backgrounds.”

Gentlemen of Leisure will be opening for the Susan Harper Conspiracy, August 10, at the Sunset Tavern. Warren Dunes will be playing at Folk Life this Sunday as part of “Ball of Wax: Songs of Protest” presented by KEXP. Massey says shows like this are a lifeline right now as well as a reminder that art is protest. “In the stressful times,” she says, “beautiful art cannot be muted, cannot be stopped.”

Reggie Garrett agrees. “Any chance we get to sort of push back against the bullshit, the stuff that’s been unleashed by this administration, the changes that are happening in the world,” he says, “is a good thing.”

Reggie will Folk Life this coming Friday night, 8:30 p.m. on the “Backporch Stage.”