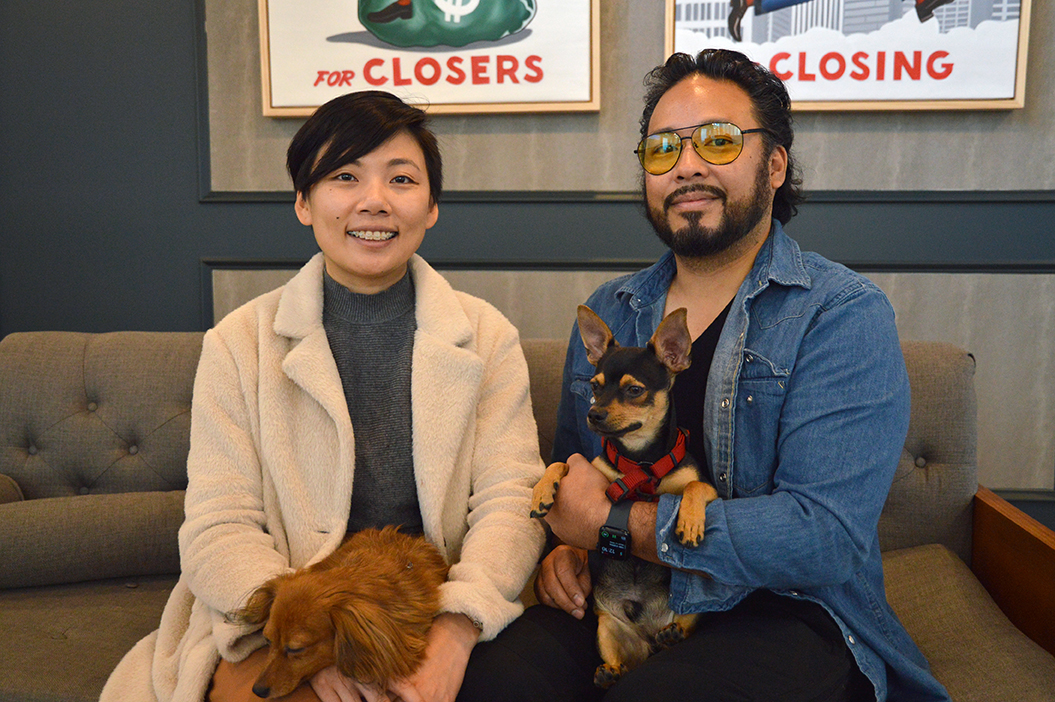 Ryan Catabay and Tuyen Than want to bring people in the Chinatown International District (CID) neighborhood together.

Look at the CID Block Party, which came back to the I-5 underpass this summer, bringing hundreds together to celebrate Asian American music, arts and culture.

Or Drag and Drop Creative, the design studio the couple started in 2017, which is like a skeleton key for a whole swath of business and nonprofit clients in the CID, providing design, technical support, and generally sprucing things up.

Drag and Drop Creative will be honored with the Leadership in Arts Award at the International Examiner’s annual Community Voice Awards fundraiser on Thursday, October 27 at Joyale Seafood Restaurant.

Drag and Drop specializes in design and branding, website design, video production and social media. More recently, under their subsidiary brand heyfunday, Catabay and Than are branching out into producing events and experiences: DJ services, rentals, photo booths, karaoke.

They hope to expand into a larger space adjacent to Hello Em coffeeshop in Little Saigon, which will allow them to offer more event rental services.

Drag and Drop’s clients include Phở Bắc Restaurant and other businesses; a marketing and ad campaign for Asian Pacific Islander youth to share their thoughts and experiences on health and marijuana titled Together Our Voices For Healthy Communities; Special Olympics WA; InterIm CDA; Friends of Little Saigon; Comcast NBC Universal, the International Examiner, and others.

“We’re a multi sided company and we have a lot of skills, and we’re like unicorns – basically, we can help at different levels of whatever the neighborhood needs,” said Catabay.

Than and Catabay want to help create opportunities for people to find community in the CID neighborhood. It’s where they live and work and where they met. In fact, their entryway into the CID, as adults and professionals, was partly due to the International Examiner.

Catabay’s parents settled in the Seattle area from the Philippines, and moved between south Seattle and Renton, but the family frequently came to the CID, where his father worked on 12th and Weller in Little Saigon.

While attending community college, Catabay had a job at Kinko’s. He designed fliers and logos on the side, until his older sister encouraged him to pursue this professionally. Catabay attended the Art Institute of Seattle for graphic design. He got a job for Realogics Sotheby’s International Realty creating marketing materials for downtown Seattle condos, and then started his own design company.

In 2009, Catabay was running this company while sharing office space with the International Examiner (then situated on Washington St.), where he served as Creative Director, designing the covers.

Than grew up in Lacey, Washington, in the only Vietnamese American family in the area. The family moved around a lot, but would frequently visit Little Saigon for culturally-relevant food and a sense of community.

Than interned at the International Examiner in high school under editor Diem Ly, managing social media, and eventually managing the Examiner’s Snapshots in Time archival project. She attended the University of Washington, majoring in American Ethnic Studies and film.

Than and Catabay got to know each other around 2015, when Than had recently graduated from college and produced the International Examiner’s first Community Voice Awards gala video. In 2016, Than and some friends with API Food Fight Club started the first CID Block Party. The Block Party took a break for a year while Than and Catabay built their Drag and Drop business. The couple started Drag and Drop in 2017, because it represented something that belonged to them both.

With Drag and Drop, Catabay and Than can choose to work with clients whose values align with theirs. Most of their clients have a grassroots, Asian American, or social justice-oriented focus.

It works like this: Clients will come to Drag and Drop with an idea, and Than and Catabay will create a plan to accomplish it based on the client’s budget and timeline, then create conceptual sketches. Maybe it’s a logo they’ll design, and then print on letterhead, fliers or business cards. For website design, the process is much the same, with more moving pieces.

“Now we’re in a really unique position in that we can kind of pick and choose what projects you want to work on,” Than said.

Than and Catabay want to expand into offering more event rental space for the community, like happy hours, podcasts, shows, interviews, photography, Christmas photos, newscasts, and more. “We really want to create a beacon for people to create and express themselves,” Than said. “And then also, as a platform for us to connect with Asian American creatives, artists, who want to come into this neighborhood and  be a part of the community, but they don’t really know where to start.”

“Media and creating content is a way of creating your story and writing your story,” Than said. “And it’s also proof that you existed in a very specific time, that is never going to happen again…And that’s why what we do is really important.”

With strong connections to both businesses and nonprofits, Drag and Drop is in a unique position to bridge the gap between them, and bring people together, Than said, as well as bringing in the creative, storytelling and technological side of things.

Drag and Drop can play a role in helping the passionate people in the neighborhood reach the masses to make change, Than said. “And then also, how do we have fun? Beyond just like, protesting and beyond just the day to day of surviving? How do we celebrate the lives that are still here?”

Never doubt that Catabay and Than and Drag and Drop will be part of the answer.