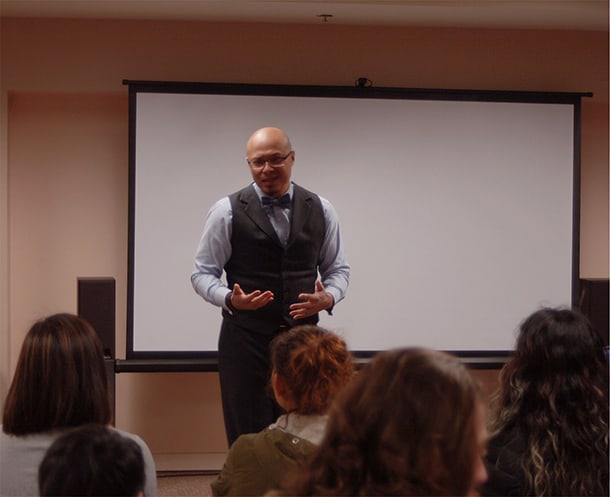 On Thursday, March 22, Silong Chhun of Red Scarf Revolution hosted a screening for the short film, Against The Odds, by Dr. Emad Rahim at the 950 Gallery in downtown Tacoma.

The film tells the journey of Dr. Rahim’s struggles and resiliency as a refugee escaping the Cambodian Genocide and growing up in the U.S. In addition to escaping the genocide, he went through an abusive stepfather, was diagnosed with dyslexia, and is a Muslim Cambodian. Instead of viewing these complexities in his life as roadblocks, Dr. Rahim turned them into stepping stones, using them to lead him to his highest potential.

During his talk, he stated that the story of the genocide was lost when people stopped talking about it. But today he is resolving that issue by creating conversation that is impactful to the Cambodian community.

After the screening, Dr. Rahim gave a more in depth talk about his experience which was followed up with a Q&A with local community members. The audience was a spectrum of people across a range in age and generations. Questions that arose were mainly about the younger generations and their ties to the history of Cambodia and how to handle hardship in life.

“People like him really inspire me to become my own person, and make sure my community and everyone that I know is proud of me, so I can be proud of myself,” said, Karin Loor, a younger audience member.
Another patron, Erin Guinip, said “He’s clearly someone who has overcome challenges… bettered himself and he’s taking the hands that he was given and now helping everyone else.” She decided to attend the screening because, “…it’s important to talk about the struggles, but the success stories as well, and he’s a success story.” She was also compelled to attend because her best friend from college was a Cambodian Genocide survivor.

The IE interviewed Dr. Rahim to talk about his purpose in telling his own story through the film.

Molica Chau: Can you explain to me why you decided to make a short film on your experience?
Dr. Emad Rahim: I was actually pressured; I didn’t want to do it originally. So when Syracuse University approached me to do this – and it was actually a graduate student that was working on his final thesis – he was like, “I want you to be a part of this, I need to graduate.”

MC: You were his thesis?
ER: I was his thesis. So he felt pressured and I felt pressured to be a part of it. And when it came out, I was wondering how people were going to take it and what is it going to mean? I was used to sharing my story, but I never saw it in picture. It was incredible to see it out there. And then all of a sudden, after I put it on Facebook, every Cambodian was sharing it. It became viral in three months with over 100,000shares. And people were approaching me and asking me questions. It’s been an amazing journey.

MC: Do you think it’s important that the new generation should understand or have knowledge about Cambodia’s past?
ER: They do, they definitely do. It’s difficult to think that the genocide is something we have in common, but it’s also a story of survival and overcoming something great. And it’s those types of stories that bring people together, so even though we go through life struggles and fighting, we can go back and say that our parents and grandparents came from this. We need to do better and we need to go beyond these little differences that we have. And I think the Jewish community has done that, and I want to not use the model that they used, but use it as an example to say even though we have differences, we want to make sure the history is saved, that this history is told, and this history is sacred and people will never forget this. A part of this is also about changing the perception of the younger generation.

MC: How has it been as a Muslim man in America? Do you resonate more with Muslims or Cambodians?
ER: I try to connect with both. But it’s kind of a struggle because, you know, Islam has some conservative viewpoints. Sometimes when I’m invited to go to a Buddhist temple for example, and I have to show my respect, and there’s Muslims that say, “well that’s not our traditions, you’re going against the faith.” I try to explain that no, this is my culture. So I’m respecting people of my culture by showing this activity and action that I’m giving. So I have to explain myself over and over again. And sometimes there are Cambodians that don’t want to have this conversation because I’m Muslim. They think that I gave up my culture or that I somehow betrayed my race. It can be difficult in some circles, but I think it’s also difficult being a Muslim in America right now. That’s another level of anxiety, stress and discrimination that I have to deal with.

MC: Knowing that majority of Cambodian Americans is of the Buddhist Faith, how has faith influenced your interactions with other Cambodians?
ER: It actually opened up a new dialogue. I think a lot of people were not aware that there were a lot of Cambodian Muslims before the Khmer Rouge. At one point, it was at three percent. Cambodian Muslims are a part of the history. here was a huge revolt that happened…when the Khmer Rouge took over the city. A large group of Cambodian Muslims actually fought back during Ramadan, and they were massacred, but it brought a new level of respect of Cambodia to the Muslim and Cham community. And now there’s a museum that is dedicated to the story, so it opened up this wonderful dialogue session, to talk about this story that most Cambodians aren’t aware of.

MC: If you can sum up your film in one word, what would it be?
ER: Resilience.

MC: Any last questions or comments?
ER: Thank you, thank you. We need programs for our younger generation, not just by talking to them, but including them [in the conversation]. That’s the important piece. Because we can’t change the mindset of the younger generation, they have to change it for themselves. So, they have to be a part of the conversation.