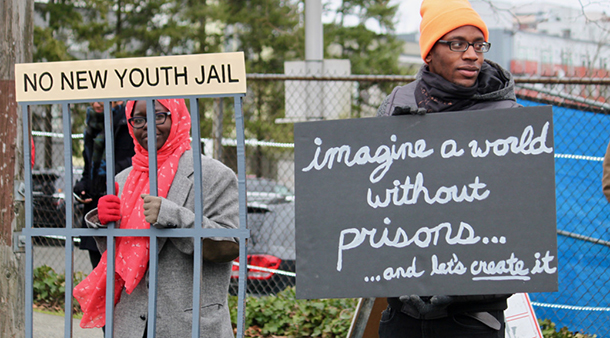 News media tout the 2016 shooting at the Jungle, one of Seattle’s largest homeless encampment under Interstate 5, as one of the deadliest in Seattle. James Tran and Jeanine Zapata lost their lives and three others were injured that fateful January night.

Three youth were accused of the shootings while allegedly collecting drug debt for their mother’s birthday. These youth had resided in the Jungle until recently and knew the encampment well. The timing of the shooting was uncanny: while shots rang out in South Seattle, then mayor Ed Murray had been giving a speech about the need to address the unprecedented homeless crisis in the city.

It is no surprise that politicians’ promises play like an old, exhausted record while violence unfolds in areas that have known poverty for generations. Safety then, quickly became the rhetoric that former Mayor Ed Murray used to justify the “removal” and “cleanup” of homeless encampments in the city. Presumably unsightly to the increasingly white and wealthy residents of Seattle, these encampments were viewed as focal points of violence and filth in the city.

That rat infestations and human feces were frequent concerns in the heart of one of the most expensive and tech-driven cities in the country seemed disgraceful. The city claimed to have offered alternatives to displaced individuals.

However, low barrier shelters or transitional housing were barely available and individuals continued to be unsheltered.

The displaced residents of the Jungle were then pathologized, their psychologies analyzed unscrupulously by the media to explain their housing choices. Once again, the city of Seattle replayed America’s obsession with individualizing the structural causes of oppression – the preference toward dissection and pathologization of marginalized individuals over the actual provision of resources and basic necessities.

Clearing the violent and filthy encampments promises a temporary solution to the structural issues of poverty, displacement and gentrification.

In June 2016, amid widespread sweeps of homeless encampments, the Jungle bore witness to another deadly shooting, this time with less media fanfare than the January incident. Michael Taylor, a homeless Korean American man, was shot and killed by a Seattle Police Department officer who claims self-defense against Taylor’s alleged knife wielding.

Like many residents of the encampment, the 45-year old was known to struggle with addiction and mental health issues. Anticipating that the sweep would require skillful crisis navigation, a social worker had requested that SPD bring in crisis counselors, not police officers, to intervene at the Jungle.

Unsurprisingly, the city’s lack of action cost Michael Taylor his life. Who he was and what he struggled with didn’t matter. Michael Taylor paid for the city’s quickfix to public safety and public health with his life, however no one was held accountable for his death.

Michael Taylor’s death was tragic, as were the deaths of James Tran and Jeanine Zapata. The unfortunate lost of these lives marked the lowest points in the unfolding saga of the city’s housing crisis. Yet, there are three other victims of structural violence and poverty that have been easily forgotten.

Two years after the incident, two of the three youth accused of the Jungle shooting are currently on trial. Joseph, age 13 at the time of the incident, has already been sentenced to 8 years in the Juvenile Rehabilitation Administration.

James and Jerome, respectively 17 years old and 16 years old at the time of the shooting, are being charged as adults and face life imprisonment if found guilty. Amidst the media fanfare, the misfortune of these youth have been conveniently disregarded. James, Jerome and Joseph, all legally children, have been vilified throughout this process and subjected to inevitable incarceration.

What the general public needs to know is that James, Jerome and Joseph are the products of the system that is now demonizing them. These three brothers knew violence long before the Jungle shooting. James was 5 years old, Jerome was 4 years old, and Joseph was 6 months old, when they were removed from the care of family members and taken into the custody of the state’s Child Protective Services.

The lives of these youths have been tumultuous and full of instability ever since. They have been in and out of foster care, homeless, and exposed to environments and activities no child should ever have to witness or experience.

Accordingly, they have had many encounters with the Department of Social and Health Services (DSHS) and the juvenile court system. In fact, at the time of the shooting, these three youth were wards of the state who were living together in a tent on the outskirts of the Jungle.

The very system that claimed to support and protect them simply failed. As with many youth of color, the criminal justice system blames the youth for these failings and holds them fully accountable to the extent of criminal law.

In contrast, there is no responsibility placed upon the state-sponsored systems that have traumatized and criminalized these youth. How James, Jerome and Joseph find themselves in such circumstances and the tragedy of the violence they committed, speaks volumes on how we treat the youth as a society.
The reality is, James, Jerome and Joseph are neither suspects or the accused , they are victims of a system that routinely and systemically harms youth of color.

We need to offer real solutions to the root causes of poverty and the housing crisis — more low income housing, harm reduction models, rent control and progressive taxation structures instead of homeless sweeps.

Similarly, we need to address the root causes of the violence that unfolded in the Jungle. Michael Taylor, Jeanine Zapata and James Tran lives were lost in superficial solutions led by ineffective state agencies.

We have the opportunity to prevent the destruction of three other lives. The youth, themselves homeless, were a product of the failures of state custody and the criminal justice system. Sending them to life imprisonment will only exacerbate that failure and extend the tragedy that unfolded that night.

Restoration and healing needs to take place in other ways. Caging and torturing of children cause long term trauma andperpetuate further pain and injustice. We need an investment into long term solutions that humanize all the parties involved.

As we develop alternatives to youth incarceration, through programs such as restorative justice models, mentorship and wrap around services, we also need to show up for the youth in the present. The youth are facing trial all though the month of July and August. They will be continually vilified and demonized.

The structural root causes that contributed to the unfolding of events that night will be easily forgotten. Children deserve love, stability, and forgiveness, not a lifetime of incarceration.

We need to be present in the courtroom to offer some semblance of recognition to their humanity.

For those of us who oppose the construction of the youth jail, we cannot forget about the actual youth that continue to be placed in these racist institutions.

The building is not more important than the youth going into it. Ultimately, just as a community is not a community without the individuals in it, a building is just a hollow space without members of our community in it.

Part of our work is to do what is necessary to stop the kidnapping of our youth by these systems to fill these buildings. Occupying these courtrooms and holding probation officers, prosecutors, and judges accountable, is one way we can show up as a community.

Too often the defendants in these proceedings stand alone against this system and its proxies. We cannot underestimate the value of our presence.

We must bear witness and not allow them to prosecute our community in the name of protecting us. We cannot let public officials continue to use the prison industrial complex as a convenient solution to the issues of public safety. It is our responsibility to stand with our youth and fight racism.

Xing Hey is a young Laotian person who feels he has been impacted by the system he is critical of in this opinion piece. He was sentenced to a lifetime in prison as a 15-year old in 1994 and was incarcerated for nearly 24 years. He says through sheer persistence and a lot of prayers, he overcame the oppression of this system and was recently released. With the awareness he gained from his own experience, today, Xing Hey is a student/activist/organizer, that advocates for social justice and for communities most impacted by such systems.