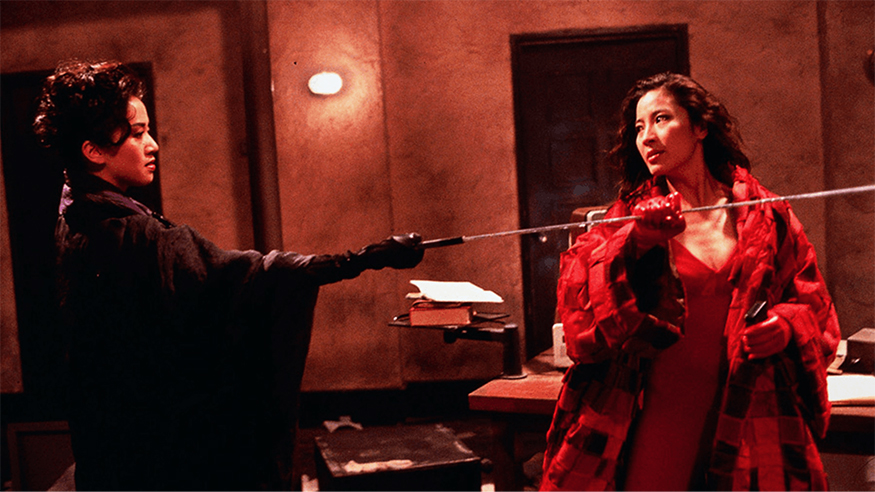 “The Heroic Trio” dir. Johnnie To

If you’re looking for unhinged fun in your summer movies – and who isn’t during these trying times – look no further than “The Heroic Trio,” a cartoonish martial arts flick with a trio of super-heroines, nonsensical plots bordering on the tasteless, and ridiculous action set pieces that beg to be seen. No doubt fans of director Johnnie To won’t find the gratuitous elements off-putting, but everyone else be forewarned.

The plot goes something like this: An evil-doer steals 18 babies for a breeding program for future emperors of China promoting panic amongst the citizenry. The action heroines who step in to save the day include Wonder Woman (Anita Mui) – not remotely related to the Lynda Carter version – The Thief Catcher (Maggie Cheung) a vigilante modelled vaguely on the Clint Eastwood character in “A Fistful of Dollars,” and a troubled henchwoman turned do-gooder in The Invisible Girl (the lovely Michelle Yeoh).

There are subplots involving sisters separated at birth, the police chief’s missing newborn, an unlikely (and confusing) romance with a mad scientist and…several others which create the spectacular nonsense that is this film. Once you strip away the comic book elements and the unlikely storylines, the repugnantly casual way children are dispatched speaks to a social order that clamors over them yet views their bodies as vessels to carry the ambition and egos of their caregivers. So serious is thrown in there between the roundhouse kicks.

Maybe that’s getting too deep about a martial arts melodrama. It’s best to enjoy it as chewing gum for the brain, and dive in the fun without trying to have it make sense. Mui, Cheung and Yeoh shine as they play out the friendship that develops between the action heroines. The actresses rise above the shenanigans and one-dimensional performances of the bumbling men, elevating the film with the warmth they bring to female friendships. Notably, the superb Cheung steals every scene she is in.

“Executioners” dir. by Johnnie To

The sequel to “The Heroic Trio” reunites the superheroines, this time, to secure drinking water in a world devastated by war that pushes neighbor against neighbor in a desperate race to survive in a post apocalyptic world. In “Executioners,” Wonder Woman (Anita Mui) is now a doting mother and housewife. The Thief Catcher (Maggie Cheung) is still a no-good rebel, while The Invisible Girl (Michelle Yeoh) strives to rehabilitate a henchman of her former evil boss. I can’t really explain the many subplots any better so please don’t ask.

Johnnie To focuses on social issues in the follow-up, and, while it still qualifies as a kung-fu soap opera, the glorious appeal of the first film with its comic book mania is missing. Just know that Wonder Woman can’t hide her fabulousness for too long. The Thief Catcher lights up the screen every single time. And a long-faced Yeoh has a thankless role as The Invisible Girl with, you know, the responsibility to do good. Just as in “The Heroic Trio” the relationship between the three leads stands out, but unfortunately the film does not.