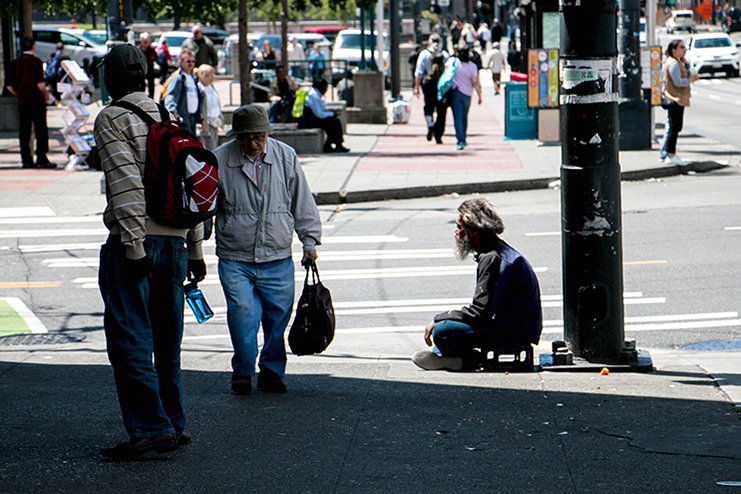 How easy should it be for the city to forcibly move homeless people from the encampments where they live? This question lay at the heart of a City Council hearing in September 2016.  Council Members were weighing a proposed ordinance — strongly influenced by ideas from the ACLU Washington — that would prevent the city from sweeping encampments deemed “safe,” unless residents were given 30 days notice and an offer to stay somewhere else. In other words, it would become harder for the city to quickly shut down the camps and force people to move somewhere else.

Though it was a debate with city-wide implications, it was particularly important to some residents of the Chinatown International District (CID). Seniors from the community voiced their concerns, sometimes through translators, about what they saw as the negative impacts of homeless people in their neighborhood.

It was an example, perhaps, of how NIMBY attitudes towards homelessness aren’t confined to the wealthier, whiter neighborhoods in Seattle.

Sonny Nguyen, then a young activist and founding member of API Food Fight Club, had some blunt words for members of their own neighborhood, as the Seattle Times reported.

“My organization has grown really disappointed in our neighborhood’s response to homelessness,” Nguyen said. “I understand where the frustration and pain is coming from, but we don’t believe that should limit our compassion for homeless people.”

Nguyen emphasized that those opposed to the ordinance didn’t speak for all the neighborhood.

But Nguyen didn’t mince words in criticizing the city, either. They claimed the city was pursuing the wrong strategy with sweeps, and furthermore was creating a false conflict between two vulnerable communities.

“It seems like the city only comes to Chinatown when they need to use us and pit us against other disenfranchised communities,” they said.

In other words, as with many aspects of the region’s homelessness crisis, it was complicated.

But Nguyen thinks to a large degree, people are just misinformed about the causes of the neighborhood’s public safety problems.

Nguyen doesn’t think people in the neighborhood are as anti-homeless as they themselves think. They see crime, graffiti, litter, a drug problem, and assume it to be the fault of homeless people when this isn’t necessarily the case. Nguyen would like to see a more compassionate attitudes towards homelessness in the neighborhood.

“I’m not saying we need to throw our hands up in the air and give them free reign, but we need to understand why these people are coming to our neighborhood, and that homelessness is hard,” they said. “The way that we hold those conversations is really frustrating and really disappointing, because I know that this is a compassionate, powerful neighborhood and that we have always stood for disenfranchised people — and sometimes that doesn’t show.”

Jamie Lee, IDEA Space manager at community development organization SCIDpda, agrees that public safety often has a lot to do with perception.

“Whether or not encampments actually cause less safety, it is seen as a public safety issue,” she said. “But I also think that a lot of it has to do with a misunderstanding of why people are homeless and what puts them in that situation.”

The frustration that many CID residents have felt over the past months and years is more due to public safety issues than homelessness itself, according to Pradeepta Upadhyay, director of the InterIm Community Development Association (CDA). Public safety is a longstanding issue in the neighborhood in its own right. And the perception from outside that the CID is not safe has hurt businesses.

“It was more this fear of, ‘Is it a safe place?’ Not blaming the homeless community, but also trying to hold the city and SPD [the Seattle Police Department] accountable,” she said.

Upadhyay remembered, after the Jungle was closed, how a parking lot that InterIm manages under I-5 lost revenue. “People were just way too scared to even park their cars there,” she said, “Even in the peak season when games were happening at the stadium.”

The level of homelessness seems to have dropped recently, according to Upadhyay, perhaps due to extra police patrols, and the fact that public safety issues have been addressed more directly, including with the hiring of Nguyen as public safety coordinator and others in similar roles.

But, she said, there’s always room for improvement. “I think coexistence is possible and it can happen if there’s a serious commitment made towards ensuring that public safety is going to be there.”

Recently, the ideal of coexistence has been tested once again. A proposal to build a 24-hour emergency shelter in the Pearl Warren building on 12th Avenue near the Little Saigon neighborhood, was put on hold at the end of April after it angered local community advocates. The shelter, known as the Navigation Center and inspired by a shelter in San Francisco, was planned as a low-barrier way to help 75 people at a time transition to permanent housing.

Community advocates were concerned because some of them only learned about the plans to site the shelter in their neighborhood — plans the city had negotiated for months — when the plans were officially announced.

“It’s not about the Navigation Center, it’s not about homelessness,” Quynh Pham, board chair of Friends of Little Saigon, told the South Seattle Emerald in March. “This issue is about respecting the public process and respecting our voices.”

There’s an unfortunate history of city bringing projects and policies into the neighborhood without engaging the community beforehand, Pham said in a recent interview. There’s a risk that the “great ideas or great policies that the city implements” will have unforeseen impacts, she said.

According to Pham, “When you bring in these resources, more illegal things and public safety concerns kind of spur from it that the city doesn’t predict or can’t support or mitigate until it actually happens, and the community doesn’t want that experience to happen again.”

Lee of SCIDpda disputes this assumption — shared, she said, by some in the community — that bringing more services providers causes more homeless people to come to the neighborhood. “Folks experiencing homelessness are already here,” she said. “They’re hanging out in the neighborhood. So we should offer them services. It’s kind of this chicken and egg thing.”

Pham and CID public safety coordinator Nguyen are both members of a Navigation Center Community Task Force which recently put together a response plan after extensive community input. In a press release this week, the task force says the City has ignored their response plan.

If the city doesn’t respond to the community and commit to mitigation strategies, says Pham, “we will oppose the opening, and we will push it out as long as we can or until we’re engaged authentically.”

Upadhyay of InterIm CDA criticizes the city for not considering the unique needs of the CID when deciding where to site the Navigation Center.

“We are talking about a very, very large residential and business community that does not speak the language, does not know how to navigate the system, has felt that public safety has been an issue that has been neglected for the longest time,” she said. “So it’s a very different scenario as opposed to putting a Navigation Center in [another] neighborhood.”

The city needs to take a special approach in addressing homelessness in the CID, according to Sharon Lee, director of the Low-Income Housing Institute (LIHI), an organization that develops and owns property for the homeless and low-income earners.

“I think the Chinatown International District is significantly more impacted by homelessness than other typical neighborhoods,” she said. “Every time there’s a major sweep in the Jungle or the Field, or anywhere along Dearborn or Pioneer Square, then people just end up in the ID, and it’s unfortunate.”

But does the CID bear an unfair burden compared to other neighborhoods when it comes to the effects of homelessness, as some in community meetings or City Council hearings would say?

According to Jamie Lee of SCIDpda, homeless people will likely always be attracted to the CID, because the neighborhood is a transit hub, it’s close to services downtown, and the food is cheap. “And also let’s be real – in Laurelhurst, they’ll sue the city, whereas we won’t here,” she said.

Sharon Lee of LIHI remembered the initial discussions with members of the Vietnamese, Cambodian and Laotian community members when the Nickelsville encampment was sited close to Little Saigon. At the time, people were far quicker to accept the idea than community members in Ballard were in 2016. But before long people in Ballard warmed to their new neighbors.

“Part of it is an education process,” Lee said. “Part of it is having people understand that you don’t have to fear homeless people, once you get to know folks and find out what their story is.”

This is one of the approaches Nguyen is trying — getting to know the regular homeless residents of the CID by introducing themself to them, offering them cigarettes, learning their names and their habits. This way, they’ll listen to Nguyen if they tell people in Hing Hay Park that they’re being too loud. They don’t have to call the police, and if there was an emergency with any of the homeless residents, Nguyen would be in a better position to help them.

This was the approach the late Donnie Chin took, Nguyen said. Chin was indefatigable in fighting for public safety, and lost his life while looking out for the neighborhood. He also saw the homeless as people first and knew them by name.

“I think there’s a lot stacked against us, as a largely immigrant, largely non English-speaking, largely working class or below the poverty-line neighborhood,” Nguyen said. And even given all that, “we can still be NIMBY too.”

But Nguyen would like to see more self-reflection from the CID community — a neighborhood that was founded by vulnerable people.