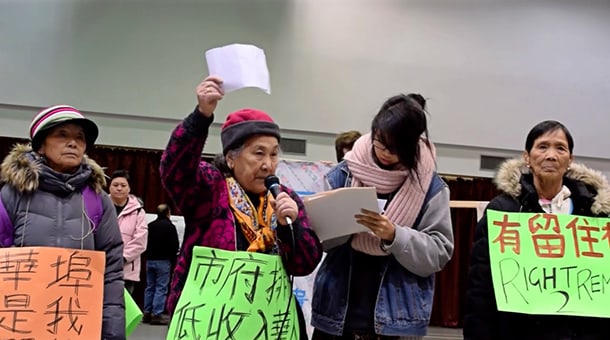 Standing among Chinese elders, Beverly Ho made her speech to a community of people from diverse backgrounds, histories, generations, and languages. She urged her city to bring communities together against rising gentrification in Vancouver’s Chinatown.

“When I saw her standing there as a young person beside the seniors, I actually almost cried,” documentary filmmaker Eva Cohen said. “I thought it was really beautiful. They had colorful neon signs written in English and Chinese with their demands and what they wanted to see happen in the community for social housing and equality. I really felt this was something that other people would want to see.”

Cohen’s film Paint it Red follows Ho, an organizer for Chinatown Concern Group (CCG) and other community activists as they fight against a major development plan, discrimination, gentrification, and for social equality.

The documentary opens with Mandarin interpreter Mark Lee speaking about Vancouver’s Chinatown as an intergenerational cultural center where people work, play, and live. He says the community can work together to preserve it and urges them to not forget Chinatown as a place of living history.

The CCG and the Chinatown Action Group (CAG) called on Vancouver City Council to reject a major development plan to build an apartment complex at 105 Keefer Street. The building would rise in the middle of Chinatown next to a historic monument for Chinese rail workers and WWII soldiers.

Social housing in Vancouver is considered anything below market rate. Ho said this is a problem for those who can’t afford even that. She also said that developers usually only build to the minimum requirements of social housing. That’s not enough to help those in need, so the city needs to change those requirements, Ho said.

“I think they should be more self-aware and see how they can be more involved in the community and less in gentrification and displacing vulnerable people who can’t afford to go anywhere else,” Ho said.

Previous developers painted the building doors red to fit the look of the historic district. “The city is always concerned about preserving heritage in architecture but not the people and the living history so we get these really corny doors,” Ho said in the film.

This was the driving concept behind the title of the film, Paint it Red.

“A lot of Chinese people don’t really care if these modern buildings are red or not,” Cohen said. “If they can’t live in them it doesn’t matter. If you paint something red it doesn’t mean that it fits in with the community or that it helps any Chinese people.”

“Heritage is just not something I can learn from looking at pretty buildings in Chinatown,” Ho said. “It has to be that personal relationship.”

The city of Vancouver passed the Historic Area Height Review (HAHR) six years ago, which promised that Chinatown’s upzoning would be used to build more social housing units. Ho says she hasn’t seen that happen in a way that would help the community.

The burden largely falls on seniors with fixed incomes, pensions, or welfare. Many seniors are supported by Old Age Security (OAS), a system based on work history. That means seniors who came to Canada and worked under the table as laborers don’t qualify.

Cohen addresses the prevalent misperceptions about Chinese people not working after immigrating to Canada.

“After I settled down I took whatever job I could,” Xing Jun Ma, or Ma Tai, said in the film. “I don’t mind hard work. I don’t want the government to support me. I did everything myself, I was already 53.”

Stories like Ma Tia’s are important to Ho, who says developments like 105 Keefer rise property values and rent and pushes out the families who have lived in Chinatown for generations.

“It’s like a slap in the face if they put up this building that nobody in the community would be able to live and is actively working to replace them,” Cohen said.

“We are quite concerned how rapidly the neighborhood is changing,” co-founder of the Hua Foundation Kevin Huang said.

The Hua Foundation works with community youth on education, activism, and organization around Chinatown’s food economy. Huang says food is an important part of cultural preservation and wants to inspire others to act against gentrification.

“Food is a part of a person’s identity. And Identity is linked to culture and a part of that is also your heritage,” he said.

The CCG’s members are predominantly women and seniors in the Chinatown community, many of whom don’t speak English and are not typically involved in community activism or politics.

“Organizing involves a lot of interpersonal relationships,” Ho said. “The biggest victory is not just that 105 Keefer got rejected but that we’ve grown so much closer and that we’re more confident in ourselves as women of color. … It was really beautiful to see them passionate and fired up speaking at public hearings and speaking to media.”

Cohen described one scene in the documentary when Ho gathers some of the elders and they start singing and dancing together.

“They were singing Cantonese and not describing what was going on just to use the space for what they wanted to do,” she said. “Those sort of moments were like yeah, I love capturing this on my camera.”

“My culture doesn’t need to be readily consumable by everybody else,” Mandarin Interpreter Mark Lee said. “That’s important and something that Beverly is really good at. She’s good at cultivating those kinds of moments in Chinatown.”

Ho, the CCG, and other activist groups brought communities together in mass for a town hall style council meeting spanning over four days. More than one hundred people from a community of diverse backgrounds and even dialects and languages lined up to speak. And more than two hundred more people showed their support.

Lee said dialect variations and the diversity of the community was a challenge for translation in the film and a continuing challenge for organizing movements.

The city of Seattle just approved an upzone of the CID, which community members fear could contribute to gentrification.

The CID is historically home to immigrants, refugees, and poorer communities, many who speak a limited amount of English. Rent in Seattle has become the fifth most expensive in the country and many fear the MHA rezoning will only add to the housing crisis.

The CCG and CAG are now working to create an alternative to the Chinatown Economic Revitalization Action Plan. Or as the CGC calls it, the CRAP. The CCG and CAG say that the current plan doesn’t get at the heart of the issue and continues to gentrify and displace Chinese communities.

Ho calls the plan undemocratic because it largely takes away the community’s say in rezoning and development projects.

Ho said the solutions are in The People’s Vision. It advocates for community voices to be heard an actively involved in the district’s decision making process.

The CCG are also working to help elders move who are being displaced by developments at Rodan Lodge.

Cohen’s plans to submit the film for the Vancouver Asian Film Festival and other wide reaching film festivals for both community and broad audiences. She says the film is a niche subject that uncovers an uncomfortable truth but is an important story.

“It’s important to document things like this because people have social amnesia and political amnesia,” she said.