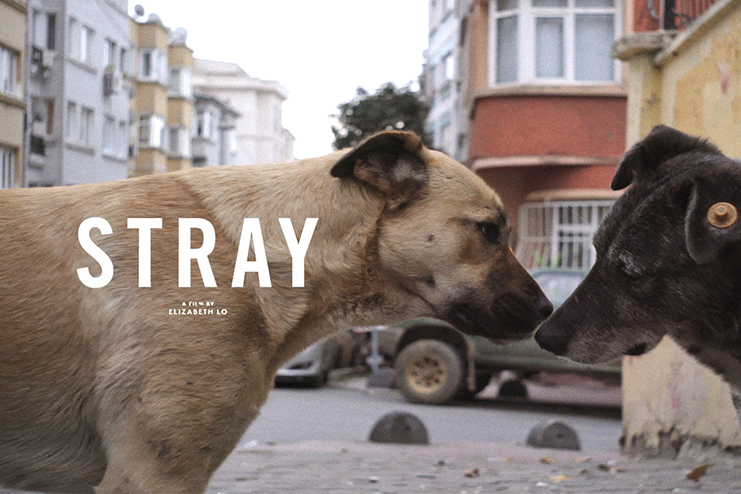 In the current COVID-19 pandemic, films continue to be streamed online rather than be presented in a movie theater setting. One of the films available for viewing in March is Stray, by director Elizabeth Lo, which follows a trio of homeless dogs, Kartal, Zyetin, and Nazar, through the streets of Istanbul.

Lo says that her initial inspiration to create Stray was personal. “When my childhood dog died, I felt a quiet need to suppress my grief at his passing,” Lo said. “I was shocked that something as personal as how my heart responds to the death of a loved one could be shaped by an external politics that defined him or ‘it’ as ‘valueless.’”

But many years passed before the elements of Stray began to take shape.“In 2017, I traveled to Turkey, a country whose history and relationship with strays is unique in the world,” Lo said. “Turkish authorities have tried to annihilate stray dogs since 1909, leading to mass killings of Istanbul’s street dogs for the last century.”

Despite that history, Lo saw signs of hope. “Widespread protests against these killings transformed Turkey into one of the only countries where it is now illegal to euthanize or hold captive any stray dog,” she said. “Every free-roaming dog today is an emblem of resistance, living manifestations of compassion in the face of intolerance.”

Growing up, Lo always loved watching films and was receptive to pursuing filmmaking as an occupation. “As an undergraduate studying film at Tisch NYU, that’s where I discovered my love and aptitude for making documentary films,” she recounted. “When I was exposed to films like Errol Morris’ Vernon, Florida or Chris Marker’s Sans Soleil, I realized in those films the author of nonfiction works could still find room to express themselves as artists without having to work with large crews.”

Lo says that she translated her experience in Istanbul into film in order to encourage others to recognize the destructive nature of our anthropocentrism.  “Zeytin quickly emerged as the focus of our production because she was one of the rare dogs we followed who did not inadvertently end up following us back,” Lo said. “To the very last day of shooting, she remained radically independent. In Zeytin, I saw a character who could fully envelop us within her own nonhuman will, a quality that was vital to a story about dogs who, unlike pets, are not only defined by their relationship to humans.”

Filmmakers take command of their viewers’ gaze, and in Stray, Lo says she is aiming to visually and aurally re-center the world around a nonhuman gaze. “It asks us to re-evaluate what it means that our streets are continuously emptied of everyone except those whom we’ve deemed to be its legitimate citizens, both human and canine, particularly in developed countries where nonhuman bodies who aren’t owned as property are systematically policed, persecuted and murdered,” she said.

“Through Stray, I hope to continually push the boundaries of the cinematic medium in order to explore and challenge unequal states of personhood, to expand viewers’ circles of moral and perceptual consideration beyond their own class, culture and species.”

Despite the pandemic, Lo is pleased with the distribution of the film so far. “In addition to the countries where Stray has secured distribution, I’m planning grassroots impact screenings locally in Hong Kong, Turkey and Brazil,” she said. “COVID-19 has been surreal and depressing, but I remind myself to keep finding ways to move forward and adapting to this new era that we’re living in.”