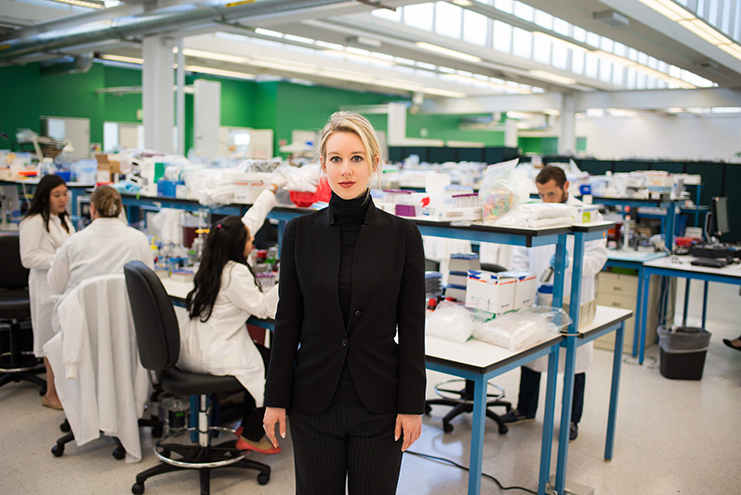 Director Alex Gibney, whose previous works include Enron: The Smartest Guys in the Room and Steve Jobs: The Man in the Machine, debuted his latest deep dive into corporate fraud and the tragic CEO at the 2019 Sundance Film Festival held in January. Centered on former startup ingenue Elizabeth Holmes, whose now-dissolved company Theranos had proposed revolutionary blood-testing technology, The Inventor: Out for Blood in Silicon Valley explores how a novel idea with little to no grounding in science swindled millions of dollars from investors without ever releasing a usable product.

Focusing on the enigmatic Holmes, who fancied herself a modern-day Thomas Edison, or perhaps the next Steve Jobs (she famously wore a very similar uniform, displaying a penchant for black turtlenecks that she claims began in childhood), Gibney seeks to understand the cult of personality that encompassed Theranos and its board of directors, which boasted members of the political elite like George P. Shultz and Henry Kissinger.

Dropping out of Stanford at 19 years old to start her own company, Holmes dreamed of a minimally invasive method to draw blood and deliver the results immediately to patients, giving them more autonomy in their healthcare. Theranos (an amalgam of therapy and diagnosis) was born, introducing a self-contained device that would be able to run over two hundred types of tests on small amounts of blood collected via finger pricks. The problem, of course, is that years and millions of dollars later, the technology Holmes promised was never delivered.

Multiple former employees featured in the documentary, ranging from lab techs to engineers to chemists, all attest that the device as Holmes insisted it should be simply defied the laws of physics. In other words, it would never work.

Holmes was not interviewed for the film (she’s been indicted on charges of wire fraud and intention to commit wire fraud for distributing results to patients with falsified results), but her presence is strong thanks to the vast amount of footage Gibney collated from media appearances. Coupled with interviews with those who knew her, The Inventor hints at her strong ability for self-delusion, implicitly suggesting sociopathic tendencies. (A lead scientist committed suicide; Theranos reached out to his widow only to demand the return of sensitive documents).

A supporting character who doesn’t receive as much attention in Gibney’s film, but who currently shares center stage with Holmes in Theranos’ ongoing legal battles, is Ramish ‘Sunny’ Balwani, a former IT guy turned Chief Operating Officer at the defunct company. Balwani, 19 years her senior, seemed to be as infatuated with her as the political heavyweights on the board. The two developed a romantic relationship, and some former employees cite Balwani’s arrival at the company as the beginning of its descent into the extreme secrecy and paranoia that signaled its eventual demise.

It’s not hard to see how young, statuesque, self-assured, blonde and doe-eyed Holmes caught the attention of so many; in Silicon Valley where everyone is always looking out for the next big thing, she seemed to be the consummate disruptor. What is more difficult to digest is how long most of her defenders, Balwani included, stayed by her side even as the Theranos lab was shut down for failing to comply with standards, and the media caught wind of falsified results given to patients.

Regardless of whatever psychological issues Holmes may have, The Inventor’s most disturbing message is how easily she was enabled to continue operating a company valued in the multi-billion range that was based on lies. Similar to her idol Jobs, Holmes created a myth and a mission; we all bought into it.