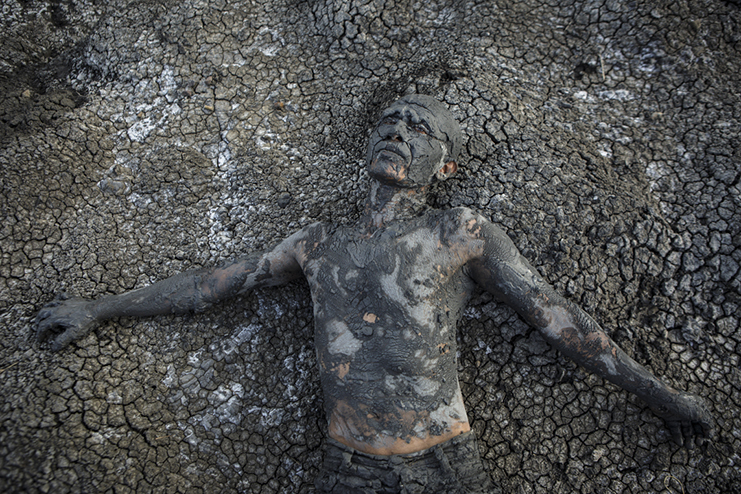 Grit will be shown on PBS’ POV series on Sept. 9.

A mud flow disaster of epic proportions—the worst of its kind in history—has been ongoing since May 29, 2006, in Sidoarjo regency in East Java, Indonesia. Nicknamed Lusi, a portmanteau of “lumpur” (mud) and its location, the mud flow has covered what is roughly equivalent to 650 football fields—double the size of New York’s Central Park—with mud that is 40 meters (130 feet) deep. Sixteen villages have been buried, more than 40,000 people displaced, and at least 13 people have died.

What is mindboggling is that 13 years later, Lusi continues to gush forth at a rate of 80,000 cubic meters (2.8 million cubic feet) per day, which is enough to fill 32 Olympic sized swimming pools, and weighs about 30 million pounds. This is an improvement from the early days when its peak rate was 180,000 cubic meters (6.4 million cubic feet) per day, which is equivalent to 72 Olympic sized swimming pools or 800 railroad boxcars. Earthen levees and dikes are basically what keep the mud at bay from the surrounding industrial city, and residents live in fear every day that their home will become part of the next deluge. Scientists predict the mud volcano will continue to regurgitate the sludge anywhere from another 20 to 40 years.

These facts are precisely why director Cynthia Wade was surprised to hear about Lusi for the first time as she was shooting a commercial for a nonprofit in Indonesia in 2012. When she went to investigate, she was floored by what she saw. She captured enough footage and did enough interviews to make a three-minute teaser when she returned, but she did not have the confidence and wherewithal to pursue the film further until she watched a documentary taking place in Indonesia that had been directed by Sasha Friedlander.

Wade reached out to her in 2013 and found out Friedlander was fluent in Bahasa and had also reported on the disaster when she worked in Indonesia as a journalist and translator for the “Bali Post.” Given the opportunity to dive back into a news story she had worked on, this time from the perspective of the victims, Friedlander was excited to join the project, especially since this gave her the opportunity to bring worldwide attention to the problem.

After five years, Grit made its world premiere at the 2018 Hot Docs Canadian International Documentary Film Festival in Toronto. It will be shown on PBS’ POV series on Sept. 9. The film centers on 14-year-old Dian and her family as they live during the aftermath of the disaster and fight with others for full compensation for their losses.

Even after 13 years, the question of whether the disaster is natural or manmade still hangs in the air. Scientists are divided between two camps: One side believes the eruption was triggered by a 6.3 earthquake that happened two days before in Yogyakarta, which is 260 km (161.5 miles) away from the site. The other believes oil and natural gas company PT Lapindo Brantas, is to blame, which was drilling 198 meters (650 feet) away from the eruption.

Often overlooked by the media and lost in the swirling debates within the scientific community about the causes for the eruption, the displaced victims believe Lapindo is the culprit and have waited for years to receive full compensation for their losses. On the anniversary of the eruption, the victims have annually staged and coordinated protests and demonstrations to voice their anger and demand what is rightfully theirs.

Lapindo is a joint venture among three companies. One of these companies, PT Energi Mega Persada Tbk, is directly connected to the business conglomerate Bakrie Group. Aburizal Bakrie used to be the chairman of the group before stepping down to serve in the government in 2004 as first the minister of economy and later as the minister of welfare. Despite stepping down as chairman, Bakrie remained one of the owners of the group and is a focal point of the victims’ demands and frustrations.

The initial estimate of damages in 2006 was $180 million, but by 2008 the estimate rose to $844 million and was expected to get even higher. The government mandated as early as 2007 that Bakrie pay at least half of it while also paying compensation to the victims. This is the same year Forbes Asia named Bakrie the richest man in Indonesia. Although Lapindo complied and paid the victims in irregular installments or small portions, the payments slowed down during the recession. According to Globe Asia magazine in 2008, Bakrie’s and his family’s net worth was estimated at $9.2 billion and was declared “the undisputed richest family in Indonesia.” In June 2018, Globe Asia ranked Bakrie as the 12th richest in the country with a net worth of $2.05 billion.

Bakrie Group’s control and ownership includes some of the country’s major broadcasting networks. According to the film’s directors, news about Lusi were contained and prevented from getting wide circulation domestically and internationally. Considering the rampant corruption in Indonesia, the accusation seems plausible, but searches for the news can easily be found through major news sources such as the Associated Press, Reuters and Agence France-Presse around the time of the eruption with ongoing reporting throughout the following decade.

Lusi poses environmental challenges as well. The vents at the epicenter still shoot gases such as methane and hydrogen sulphide. To help contain the mud, it has been dumped into the Porong River, which eventually leads to the Bali Sea. This has affected the local shrimp and fishing industry and may have introduced heavy metals into the water system, affecting the health of those living around the disaster. Possibly the only positive outcome is the creation of Lusi Island, a fishery with mangrove plantations that was made possible from the mud dredged from the river. Plans are in the works to make it a future tourist attraction.

Displaced residents have made a living off of Lusi by joining the disaster tourism industry, which has become more common in Indonesia due to its many earthquakes, floods and volcanic eruptions. Visitors of all types, from models to researchers, come to see Lusi, which has become a visual paradox that draws a mix of joy, wonder and curiosity while simultaneously being a source of misery.

Lapindo’s CEO announced in 2016 that the company will resume gas drilling in Sidoarjo to repay the $56.5 million loan the government gave the company which was used in part to pay off compensation claims.

The documentary follows Dian and her mother Harwati as they deal with life in the aftermath of the disaster eight years later. Harwati is a single mother raising two daughters while working seven days a week shuttling tourists on her motorbike who want to see Lusi. Her husband, who was a Lapindo employee, died a year after the disaster from cancer. As the 2014 presidential election approaches, a candidate that resonates with the demonstrators brings hope not unlike the feeling Americans experienced during the 2008 election year.

From the beginning, Wade and Friedlander understood the difficulty in marketing a film about mud and decided from the start that most of their funding would go into the cinematography, even forgoing their own payment as directors. Over the course of five years, they made nine trips where they filmed during 18 hour days, each trip lasting three weeks. The directors make no secret about who they think is to blame for the disaster: the documentary focuses on Lapindo, its role in the cause of the disaster, the people’s protests against the company, and includes an interview with Bakrie himself.

The long distance posed a significant challenge for the directors since funding was collected and saved sporadically throughout the years; there was always the possibility that the directors would not have enough money saved to make the 30-hour flight to Indonesia when something urgent happened. Fortunately, they had a local film crew that could jump in whenever they were not present.

Although the directors initially followed three separate families, they ended up focusing on Harwati since she was a vocal and involved leader and demonstrator from the start. Harwati always encourages Dian to fight against social injustice, and as the film progresses, Dian rises and becomes a voice and activist for her community with aspirations of becoming a human rights lawyer.

Grit is a powerful and moving film that captures the hauntingly arresting beauty of the disaster area with eloquent wonder. The documentary not only highlights female leadership and social activism but acts as a warning signal to people about the injustice and dodgy circumstances that can occur when a government leader is also heavily involved in business.