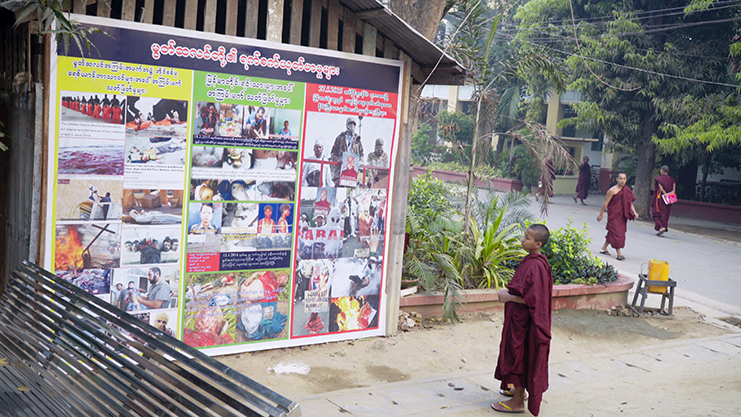 Director Barbet Schroeder delves into the heart of terror as he explores evil in one of the most unassuming religions of the world: Buddhism. Schroeder shows that although Buddhism is often associated with peace, tolerance and non-violence, it has also been used as a conduit and tool to incite hatred and fear, namely in Southeast and Southern Asia. Like Islam and Christianity, charismatic and corrupt individuals have taken advantage of Buddhism’s widespread popularity and have used it as a platform to dispense hateful rhetoric, justifying actions contrary to its teaching. This barrage of hate has strong xenophobic overtures and is often directed against minority groups in the name of nationalism.

Northwest Film Forum will show Schroeder’s The Venerable W. on Apr. 11 and 21 at 7:00 PM. This film is the last of his Trilogy of Evil series and profiles Ashin Wirathu, the man given the honor of being “The Face of Buddhist Terror” in Time magazine in 2013. It will be co-presented with the Washington chapter of the Council on American-Islamic Relations with a discussion following the screening.

Background to the crisis

The Rohingya refugee crisis brought worldwide attention a couple years ago when violence broke out between police forces and militants from the Arakan Rohingya Salvation Army on Aug. 25, 2017. The skirmish resulted in the death of over a dozen men, but this gave the military the excuse to retaliate against the so-called terrorists by setting Rohingya homes on fire with helicopters and petrol bombs, displacing tens of thousands of people and forcing them to flee for their lives by making the treacherous trip across the border where more problems awaited them in Cox’s Bazar, Bangladesh.

There were also reports of the military raping women and even killing children. An estimated 6,700 Rohingya were killed, including 730 children under the age of five, after a month of the attack, according to Doctors Without Borders. National Geographic states that over 723,000 refugees fled to Bangladesh by August 2018, which is over half of its 1.1 million population in neighboring Rakhine State in Myanmar.

Although this gives the impression these problems erupted fairly recently, tension between the Rohingya and the Burmese can be said to go as far back as the 1780s, when King Bodawpaya of Burma conquered Arakan, the independent kingdom the Rohingya populated since the eighth century, now known as Rakhine State, which shares its northern border with Bangladesh. So many refugees fled to Bangladesh at this time that British diplomat Hiram Cox developed a town there called Cox’s Bazar to aid them. From 1824 to 1942, Myanmar was under British rule, a time when many migrant workers entered the country.

Problems between the Rohingya and the Myanmar government continued after the country became independent in 1948, but the situation escalated after the military coup in 1962. After a culmination of events that systematically targeted the Rohingya population, the government passed a citizenship law in 1982 that identified 135 ethnic minorities except the Rohingya, saying that they were illegal immigrants from Bangladesh that came during British rule. This law effectively made them stateless (the largest in the world), restricted their freedom of movement, limited their access to education and healthcare, and made them vulnerable to random confiscation of property. In a census the country conducted in 2014, which was its first in 30 years, the government refused to count them as Rohingya and would only allow them to identify themselves as Bengali.

In September 2017, then U.N. High Commissioner for Human Rights Zeid Ra’ad al-Hussein called the events in Myanmar “a textbook example of ethnic cleansing.” Others, including the U.S. Holocaust Memorial Museum in December 2018, called the country’s treatment of the Rohingya a genocide. Despite pressures from the international community and from fellow Nobel Peace Prize laureate members to take action, Aung San Suu Kyi, leader of the governing National League of Democracy which came back into power in 2016, has remained largely silent over the issue, arguably on the side of the Buddhists.

News about the crisis has mostly focused on the actions of the military with little mention of Buddhists. Released in 2017, The Venerable W. gives a more detailed examination into the Buddhist involvement and its responsibility in the displacement of the Rohingya, which includes personal interviews with the notorious Wirathu. To round off his account of events, Schroeder includes interviews with other leading Buddhists and journalists, along with other monks and experts. Sometimes narrated by Schroeder, it is most often narrated by Maria de Madeiros, the Little Buddhist Voice, whose observations and quotes from Buddhist teachings remind the audience that the thoughts and actions of militant Buddhists are not in line with general Buddhism.

A charming man with a friendly demeanor, Wirathu seems like a good-hearted man until he opens his mouth and spews out hatred, all with a smile on his face. Central to Wirathu’s campaign of terror is his notion of protecting race and religion, a theme that repeats itself in the movements and organizations he leads such as the 969 Movement, a nationalist movement that tries to protect race and religion, and the Ma Ba Tha, the Committee for the Protection of Race and Religion. Schroeder, knowing that Wirathu already understands what is permissible to say in public, gives Wirathu free reign to say what he wants and tries not to challenge his beliefs. In this way, he allows the audience to appreciate the unadulterated truth of Wirathu.

“I wrote two sermons about the African catfish,” Wirathu says early in the documentary. “The main features of the African catfish are that they grow very fast. They breed very fast too. And they’re violent. They eat their own species and destroy their natural resources. The Muslims are exactly like these fish.”

Although Muslims comprise only four percent of Myanmar’s population, Wirathu is concerned that Muslims will overpower the country. “Their mosques are not places of worship like our monasteries,” he says. “They are military bases meant to plan attacks against non-Muslims. I have seen through the Muslims’ intent, which is to convert the whole world to Islam.” Schroeder takes this belief and shows how it aligns perfectly with Western Islamophobia—a chilling reminder that these events are not just isolated to “undeveloped” parts of the world but are applicable everywhere.

Much of Wirathu’s Islamophobia seems to stem from experiences he had from his childhood. When he was 12, the rape of a 14-year-old girl from a nearby village had a profound impact on him. His family also struggled financially since he was in high school. Due to these experiences, he seems to view Muslim men as potential sexual predators and seems angered by the wholesale success of Muslim businesses. “The Muslims own a lot of businesses,” he says. “This is why we give instructions not to buy from Muslims because, from the money they earn, they can marry Burmese girls and invade the whole country.”

The documentary shows Wirathu’s rise as a monk, his early use of the word “kalar” (a derogatory term for Muslims), his belief that the government has failed to protect Buddhists, his charisma and rising popularity, his skill at administering hate and fear among his followers, and his inherent understanding of the effective use of propaganda. It also details the string of violence that occurred from 2012 to 2013 in Muslim townships that his lies and hateful preaching may be responsible for, and the Ma Ba Tha’s aggressive involvement and campaign for the passage of the Race and Religion Protection Laws in 2015.

As a modern, Western-educated woman, it is disconcerting to watch clips of Wirathu’s preaching. His fears of miscegenation between Muslims and Buddhists hinge on male chauvinism and the superficiality of women. His characterization of women makes it clear he thinks they have no moral compass. Indirectly, he is accusing them of helping the Muslim population multiply. In his estimation, women are one-dimensional with no intelligence; I can’t help wondering exactly how many Buddhist women agree with this oversimplification and if they find it as offensive as I do. The film could have been stronger if Schroeder had balanced his interviewees with some female perspective.

Overall, the documentary is a chilling look at what could be perceived as the inherent evil present in all of humanity. Humans have the power to transform innocent things, even children, into violent instigators of hate. It is a warning to the West about populist ideology and what it could bring to the structured, developed world.