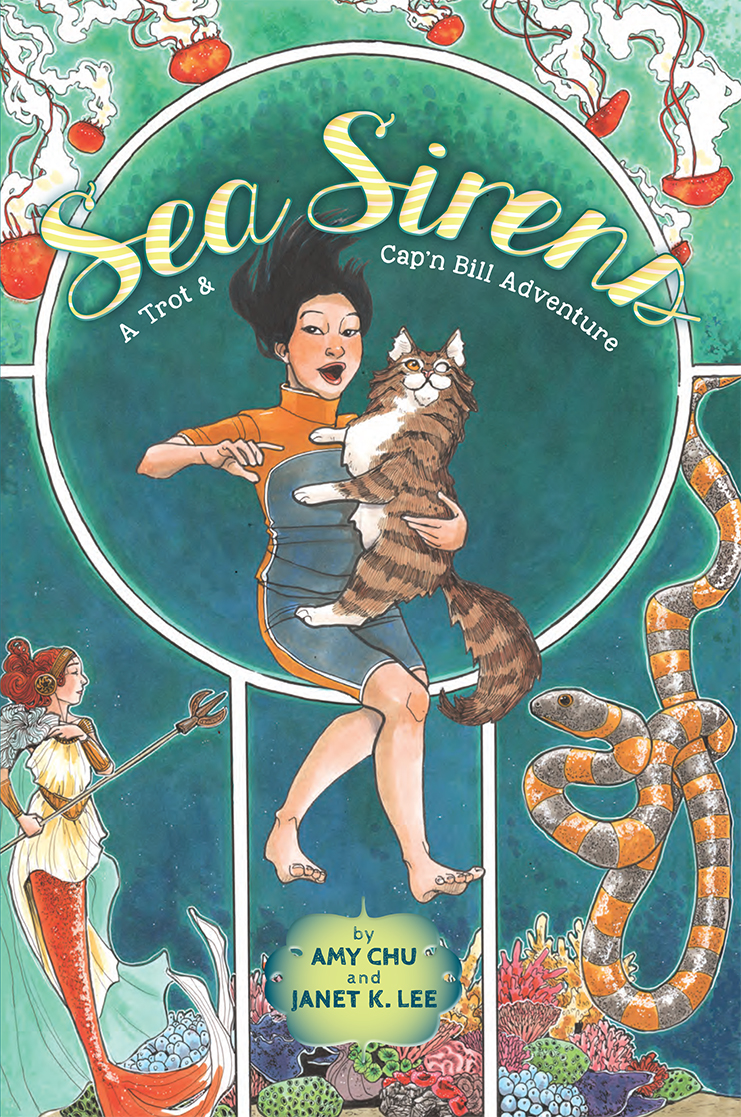 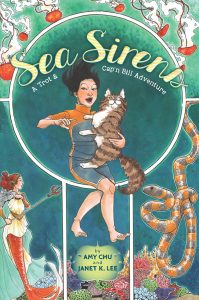 Comic book writer Amy Chu and Eisner Award-winning illustrator Janet K. Lee are the indomitable duo behind Sea Sirens, a graphic novel loosely based on an underwater adventure penned by beloved children’s book author L. Frank Baum. Both Chu and Lee have a distinguished career in comics: Lee’s attempt at illustrating her first graphic novel The Return of the Dapper Men won the 2011 Eisner Award for Best Graphic Album, while Chu is a co-founder and the publisher of Alpha Girl Comics. Both have a wealth of titles under their belt from working on serial comics for major publishers such as DC and Marvel.

Chu has an unconventional background. With dual degrees in architectural design from MIT and East Asian studies from Wellesley, Chu worked in management consulting after graduating from Harvard Business School in 1999. Other than having read a few graphic novels in college, the world of comics never registered a blip in her periphery until her friend and Harvard alumnus Georgia Lee, currently a producer and writer on CW’s post-apocalyptic show The 100, approached her in 2010 about starting a publishing company showcasing more female writers in the comic book world. Chu and Lee founded Alpha Girl Comics in 2011.

At Lee’s recommendation, Chu started taking an online writing class taught by Andy Schmidt, a comic book editor who used to work at Marvel, and was surprised to learn she had a knack for storytelling. She instantly became hooked and took a number of classes during 2011 that taught her every aspect of comic book production such as lettering, coloring and editing. She even enrolled in an introduction to art class and a summer writing course with comic book writer Scott Snyder in Sarah Lawrence College.

Once Chu self-published her first work Girls Night Out and Other Stories in 2012, she was committed to a career in comics. To network, she traversed many conventions and used her business experience to organize panels just so she could be on them. Her passion and persistence got her the attention she wanted, and she started receiving freelance writing work by 2013.

The Road to Sea Sirens

Janet Lee, a book buyer in years past who has formal training in creative writing, had always tinkered with the idea of adapting Sea Fairies. Although she loved its visual elements, she knew the story, setting and some of its characters would not appeal to a modern audience. The two main characters, for instance, is an ex-sailing captain with a peg leg named Cap’n Bill and a 12-year-old girl named Trot, both of whom were not related to each other. Lee had started drawing mermaid portraits in 2016 and showed them to Chu. The discussions that followed gave Chu ideas that breathed new life into the story.

Chu suggested the story take place in Southern California and to have it revolve around an Asian American family. Trot was changed to a teenage Vietnamese surfer girl and Cap’n Bill became an adopted stray cat with one blind eye. They decided to keep the characters’ names and the essence of the battle scenes, but they completely changed the storyline. The intergenerational friendship in Sea Fairies is retained by adding a grandfather that lived with Trot and her mother. This addition seemed more natural and fitting since it is more common to see grandparents living in Asian American households. In Baum’s book, Trot is saddened by her father’s absence, but in the modern makeover, Trot’s mother is a single mom, and the father is never mentioned. The grandfather’s dementia is what pushes the story forward.

Lee decided to give the story the lavishness it deserved by using a technique she used in The Return of the Dapper Men: decoupage. This method involves cutting paper and layering them on top of each other to give a 3D effect. Lee also drew inspiration from line art illustrators such as John Tenniel (Alice in Wonderland) and Garth Williams (Charlotte’s Web). The style allows her to fill almost every inch of space with detail. Although pencil, ink and coloring are often divided among three or four people, Lee did all of this herself.

With an eight-page sample, the two quickly got an offer from Viking Press. Mermaids becoming a recent hot trend also worked in their favor. Although the book is marketed toward a middle grade audience, it is meant for people of all ages with a penchant for a seaside fairytale. A sequel is in the works called Sky Island, yet another one of L. Frank Baum’s books.

Meet Trot, a girl who likes to surf at Huntington Beach with her crusty and surly cat, Cap’n Bill. She is joined on the beach by her grandfather, who likes to fish while she surfs. It is Trot’s responsibility to look after her grandfather since he has dementia, but she fails to do so one day when he wanders off from his usual spot on the pier. After agonizing over his whereabouts for a day, he is found. Her mother grounds both her daughter and father, forbidding them from going to the beach and doing the activities they normally do.

Infuriated at this injustice, Trot sneaks out with Cap’n Bill and goes to the beach when her grandfather is asleep. After an aggressive wave wipes them out, Trot notices Bill is missing and looks for him underwater. As she goes after him, she and Cap’n Bill find themselves in the middle of a battle between the Sea Sirens (mermaids) and their worst enemies, the Serpents. After Cap’n Bill saves the day, the Sirens reward them by welcoming them into their kingdom. Thus, their adventure begins.

The first thing readers will notice is the beautiful artwork and the fine details that can be seen, such as the lines that spread across the grandfather’s face and the lines of fur on Cap’n Bill. The minutiae that Lee takes into consideration is breathtaking; readers will find themselves spending several minutes poring over the intricate wonders born from Lee’s vivid imagination. The majestic underwater sea kingdom is a sight to behold and is brought to life with Lee’s use of vibrant colors, her rich portrayal of underwater life, the imaginative use of underwater sea creatures and much more.

The story itself is an ingenious adaptation of the original and carries lessons about the problems that can sprout from the false impressions, judgments and misunderstandings we have of others, even of those who are near and dear to us. By taking the time to understand and truly listen to others, we may have more peace and less division in the world. The story might particularly appeal to cat lovers since the Sea Sirens have an instant fondness for the cuddly Cap’n Bill. It is also through him that Chu shows the people closest to us may in actuality be like a dear pet that we only assume we understand until we take the time to listen. As evidenced by the amount of human trash that finds its way to the bottom of the sea, Chu also seems to be making a subtle comment about the excessive waste we create and the unseen places they end up in.

Dive into Sea Sirens and cool off with this underwater adventure today!