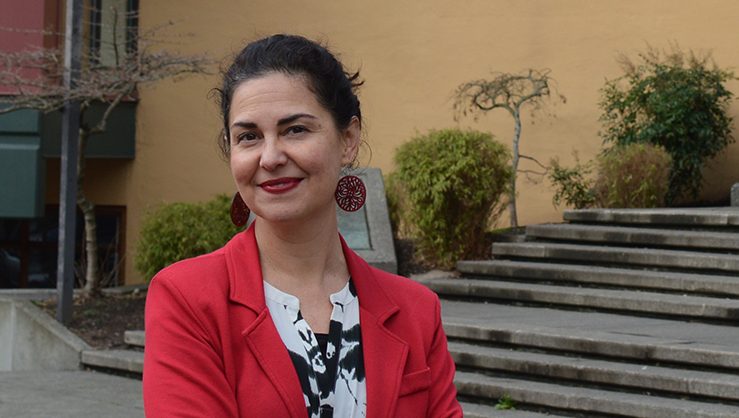 Tammy Morales is one of seven candidates hoping to represent District 2 in City Council. The biggest challenge for her campaign at the moment? “Getting to all 20, 30 neighborhoods,” she said with a laugh.

The district has been represented by Council President Bruce Harrell since he won election in 2015, the first year Seattle changed to representation by district. Morales ran against Harrell that year and came within 344 votes of beating him. In January, Harrell announced he will not seek re-election.

Morales believes City Council has been listening too much to corporations and lobbyists and not enough to community concerns. “I think this district needs a really strong advocate,” she said. “I really want to use this seat, if I’m elected, to serve the people of District 2, really build power and build their voices, bring them to City Hall so that we can make sure that working families don’t have to struggle so hard.”

Her top priorities include housing affordability, homelessness and affordable childcare. These are city-wide issues, but they’re “felt more acutely in District 2,” Morales said. She thinks the district needs more resources and attention because of its high unemployment, communities within the district that are at risk of displacement, and families that don’t speak English.

Morales said growing up as the daughter of a struggling single mother has influenced her work in social justice. Her policy background includes work in food security, affordable housing and childcare and mental health services. She works for the Rainier Beach Action Coalition and South Core, a coalition of organizations in south Seattle focused on equitable development. She also serves as co-chair of the Seattle Human Rights Commission.

In an interview, Morales spoke at length about the need to prevent displacement in Seattle. “The strategies we’re doing that may eventually increase housing affordability still don’t address the fact that people are getting pushed out right now,” she said.

She would like the city’s Race and Social Justice Initiative to be be used more aggressively to achieve policy goals, and believes land use, permitting and design review processes should be used as tools to achieve equity.

In the CID, new developments in the neighborhood must obtain a permit of approval from the International Special Review District (ISRD) Board. Morales agrees with InterIm Community Development Association that the ISRD Board should consider other aspects of development, including equity.

The evening before the interview, Morales attended a meeting during which the ISRD Board issued a certificate of approval for final design of a 17-story condo project, controversial among some in the neighborhood.

“I would love to see these questions of equity raised as soon as they apply for a permit,” Morales said. “If we develop some criteria that says any project has to meet these racial equity goals, then it is incumbent on the developer to explain how the project meets our racial equity goals, and if it doesn’t meet our goals, you don’t get your permit.”

InterIm CDA is planning to petition City Council to change the purview of the ISRD Board, said Leslie Morishita, InterIm’s real estate development director. Morishita met Morales through her anti-displacement work with South Core. She personally supports Morales’s campaign for City Council and believes she would be a responsive representative for the CID.

Morales has additional ideas for fighting displacement, including deferring property taxes for low-income homeowners and seniors on fixed income so they don’t feel pressure to sell their homes. Another strategy is anti-displacement vouchers that would provide families in danger of being pushed out of the city with longer-term help. In the CID, Morales said, many seniors live in old buildings that could be closed if the property owners can’t afford to bring them up to code, putting them at risk of displacement. She wants the city to help these property owners renovate in the ways they need.

Morales considers the Mandatory Housing Affordability (MHA) policy introduced by former mayor Ed Murray — which allows developers to build higher in parts of the city in exchange for either paying into an affordable housing fund or building some affordable units — a poor tool for increasing affordable housing. But she believes the city should adopt it city-wide and “move on so that we can focus on things that will actually stem displacement.” She wants the fees developers pay as part of MHA to be re-invested directly into the community for housing, rather than into a city fund for later use.

To address housing affordability and homelessness, Morales believes the city must build more low-income and family-size housing. She supports changing zoning to allow more backyard cottages and mother-in-law units in the city to increase housing stock.

Violet Lavatai, executive director of the Tenants Union of Washington, supports Morales’ campaign and hopes that she can tackle the housing crisis, including evictions, a rise in homelessness and a rise in families being displaced from the city.

“If you’re in this seat, it’s a hard task, and you want people in there who will advocate,” Lavatai said. “Tammy will not only be tackling these issues, but she will bring voice to the community.”

As co-chair of the Seattle Human Rights Commission, Morales thinks the city is not living up to its ideals in how it handles people experiencing homelessness. “We have declared ourselves a human rights city, but we are ticketing people for being poor, we are moving people from one side of the street to the other who don’t have a place to live,” she said.

Morales said she would not have have voted to repeal the Employee Hours Tax (or head tax), which would have raised around $47 million per year to address homelessness. City Council approved the tax unanimously in May 2018, but repealed it the following month, with only two members dissenting.

Morales believes it’s important to find progressive revenue sources like the head tax. She worked with the coalition that attempted to institute a city-wide income tax on high earners in 2016. Other potential sources of progressive revenue she’s interested include a small payroll tax or real estate transaction tax. “We have to figure out how we’re going to pay for things and we can’t keep doing it on the back of low-income families with sales tax and property taxes,” Morales said. “Business is going to have to pay their fair share.”

Morales said it will also be important for her and other City Council members to work closely with legislators in Olympia to address food security and mental health services.

Sen. Rebecca Saldaña, who represents Washington’s 37th District, including the CID and parts of south Seattle, has endorsed Morales. “Our City Council must be willing to work with Olympia to find solutions to our broken tax system and ensure that the voices of our racial, economic and climate justice advocates are heard in City Hall,” Saldaña said in a statement. “Tammy Morales has both the policy experience and the grassroots experience to make both of those things happen.”

Morales also has the endorsement of Congresswoman Pramila Jayapal, who represents Washington’s 7th District, including Seattle, in the U.S. House of Representatives. “Tammy is a champion for working families,” Jayapal said in a statement. “She’s been a strong advocate for policies that protect against displacement and is committed to building a local economy that works for everyone.”

Larry Reid, president of the Georgetown Merchants Association and an arts programmer in Seattle since the 70s, said Morales has gained his trust with her strong presence in the district. Georgetown, a small neighborhood in District 2 near Boeing, is an economic engine and has a growing arts scene, but Reid feels the neighborhood has been overlooked by the city. “Since the City Council went to District representation, from my perspective Georgetown hasn’t had any representation,” he said. Reid believes Morales will be accessible as a City Council member.

“She’s compassionate, but I would describe her as a pragmatic progressive,” he said. “I think she’d be a creative problem-solver.”

Reid believes Morales “has a very sophisticated and holistic view of economic development,” and will work to make the prosperity from new tech jobs more inclusive.

Morales said she is politically aligned with the “progressive block” on City Council. She particularly admires Councilmember Teresa Mosqueda’s work in becoming “a champion of working families” after just one year on Council. “She really puts low-income folks, communities of color at the center of everything she’s trying to do, and I really appreciate that,” Morales said of Mosqueda.

If elected, Morales said she wants to help communities recognize that they have power to have their voices heard, and “use their power to make sure that we declare our right to the city, so that it’s not just about corporate power players, it’s about constituents.”