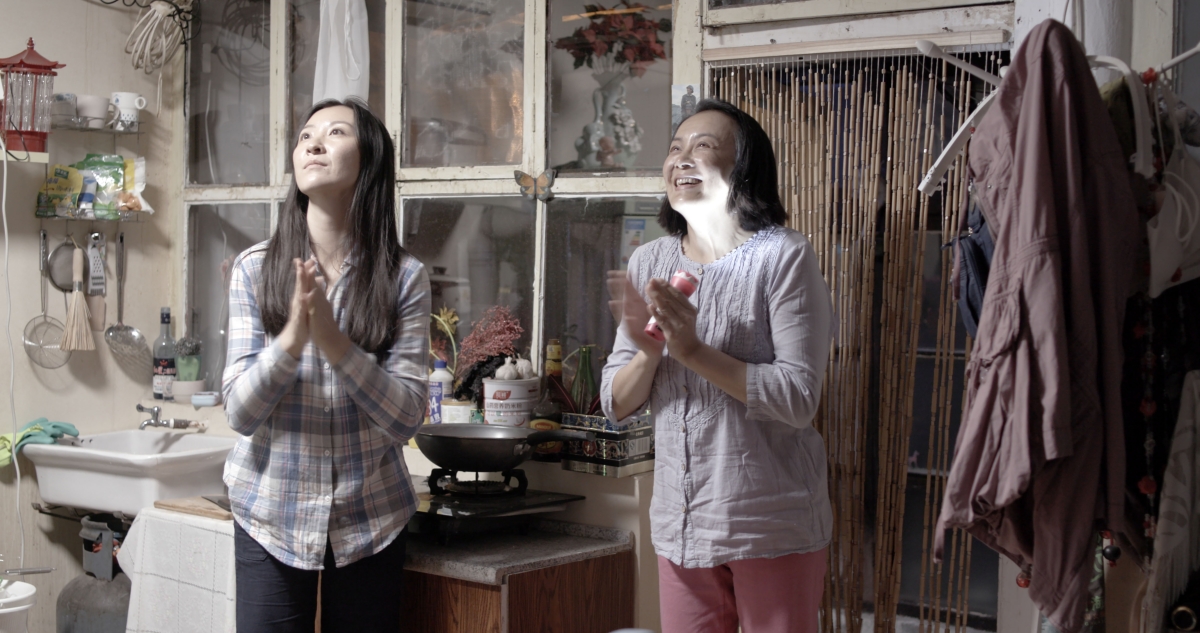 In Yang Mingming’s debut feature film, Girls Always Happy, we experience the everyday life and struggles of a mother and daughter living in a Beijing hutong. The film is tender and honest as it explores issues of class and gender, digging into the nuances and contradictions of this mother daughter relationship and what it means to be a woman in contemporary Chinese society.

Inspired in part by Yang’s own relationship with her mother and her experience growing up in a hutong, Girls Always Happy centers around a daughter, Wu (Yang Mingming), and her mother (Nai An), who care deeply for each other, but are constantly butting heads. Wu is a struggling screenwriter doing her best to get by financially, and her mother, who also takes up writing as a hobby, spends her time tending to her elderly father in-law and worrying about her daughter.

The title of the film, intended ironically, points to the unhappiness of the characters in the film and reflects the moments of sarcastic humor which run throughout.

In Girls Always Happy, the ordinary becomes intriguing as Yang brings subtle moments to the fore. The film portrays mundane aspects of life, from moments of silence, to shots of eating and cleaning, to quarrels between Wu and her mother.

With feminist undercurrents, Girls Always Happy is a sincere portrait of a mother and daughter who remain determined through their disappointments with money and men, and their strained yet loving relationship each other. As a daughter, I found the ups and downs of this mother daughter duo to be poignant. While Yang was in town for SIFF, I got a chance to speak with her about her work and this recent film.

***
International Examiner: Could you tell us a little bit about yourself and how you became a filmmaker?
Yang Mingming: Actually, I wanted to be a dancer when I was a child. It wasn’t ballet – we studied Chinese folk dance. But a dancer couldn’t eat a lot (laughter) – I ate too much. After graduation, I made a short film called Female Directors. It was released in North America and was a very independent film. I just spent 300 euro and it was just two actors, me and my friend. It was the two of us using a camera and exchanging a camera to make the whole film. 42 minutes in a mockumentary style.
From that, some people knew about me and that encouraged me. But it took six years to make a feature film.

IE: How did you decide to make this film?
YM: It’s based on me and my mother’s life a little bit. It wasn’t easy because I really want to shoot romantic films and love stories, but I didn’t have any feeling of that during these six years (laughter). I had some struggles with my mom and that’s how it happened.

IE: Could you talk about the unique bond of the mother daughter relationship?
YM: In this film, the daughter and the mother hate each other, but at the same time they love each other. We really can see that the daughter, when she grows up, will be just like her mother. She will become her mother. It is something of a tragedy because there are many similarities between their personalities. It’s also a wider symptom of Chinese society, where people will not have economic stability, so they will have conflict. In society, they couldn’t provide enough security so it becomes people against people.

IE: For much of the film, Wu and her mother are focused on gaining status and wealth through men in a patriarchal society, whether it is through Wu’s grandfather’s inheritance or through marriage. Later, it seems they find comfort and support in each other. How do you see your work as feminist?
YM: First, I don’t know how to write about men (laughter), so all the male characters in my films are supporting roles. I am not very outwardly feminist, but I do think in China, quite often women are better than men, in terms of morals and humanity.

IE: I would like to ask you about the significance of food in your film. The different sections of the film are named milk, lamb marrow, melon and there are many scenes which take place around eating. What role does food play in the way the story is told?
YM: The story doesn’t have a strong narrative, so I decided to format the film in three chapters. The first chapter is titled “Milk” because it is one of the most affordable, accessible foods that supplies nutrition. It works very well with their social class and status and they would be able to afford it. And for “Lamb chop”, many people in China have memories of not having enough food, so eating any form of meat at a symbolic level means improved living. The last chapter is titled “Honeydew”, for living life with a little bit of a sweeter tone.
And through the way one eats food, we can see their social status and state of mind by the way they eat. For example, in the way the mother squeezes milk out of the bag of milk – that will tell you a lot about the person.

IE: I was wondering if you could talk about the title. Why is the English title Girls Always Happy and what was the original title of the film?
YM: (Laughter). There is no one happy [in the film], right? The original title translated directly is like “tender histories”. But it’s not a romantic, beautiful film. It’s a little bit dark-funny, so that’s why I used this in the opposite way.

IE: How have different audiences responded to your film? Has the reaction been different in Beijing or other places in China compared to here?
YM: I actually enjoy the feedback of the West more. The audience feedback is exactly what I’ve been expecting. The film hasn’t been played much in China, just once in Hong Kong. I’m a bit worried because this lived experience is very real in China, and also it in some ways challenges what a family or mother daughter relationship should be in China.

IE: Could you talk about the setting of the film in Beijing and particularly hutongs?
YM: Hutong is a typical Beijing traditional neighborhood and it’s quite distinct from the rest of the city. There’s nothing really specific in terms of meaning, but I just found it more interesting. And in hutong, there’s less privacy, since people can keep an eye on each other and hear their neighbors.

IE: Do you have any last words you would like to share? What do you hope people take away?
YM: I want people to see it and I think my film is the real China. Truth is important.