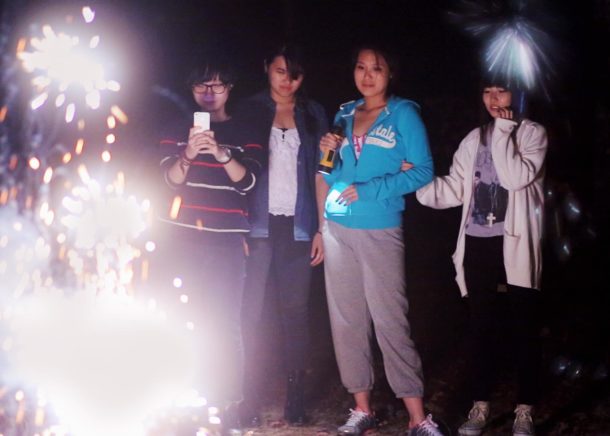 Director Miao Wang, whose first full length documentary feature, Beijing Taxi, debuted at SXSW seven years ago, returns to the festival with her latest project, Maineland. Through the eyes of the two teenaged protagonists, Wang explores the recent phenomenon of affluent Chinese families sending their children overseas for education—in this case to a small, secluded Northeastern boarding school.

Wang first became interested in the subject when wrapping up Beijing Taxi, which focused on the rapid gentrification occurring ahead of the 2008 Olympics. However, finding schools—let alone families, willing to grant the director full access was no easy feat. Eventually she met an admissions officer from Maine’s Fryeburg Academy, a small private boarding school established in 1792, one of many institutions actively recruiting Chinese students. Of the forty prospective students interviewed by Fryeburg representatives that year, less than half are offered admission.

Stella, Maineland’s female lead, has a seemingly perfect life. Conventionally pretty and graceful as a ballerina, she is vivacious and bubbly, freely babbling to the camera how much she admires the American lifestyle and culture based on her two favorite films, Bring it On and High School Musical. Her family owns a mansion in a gated community replete with grand staircases, marble, and a small dog; a setting that wouldn’t look out of place on an American reality show. But beneath the veneer of the nouveau riche, her life isn’t so picture perfect; between her first and second years at Fryeburg, we learn that her father’s affairs have led to a divorce, and that the family business is struggling.

“My English still isn’t good,” she jokes to her mother upon coming home for summer break.

“But I have a lot of friends!”

Harry, Wang’s other focus within the Chinese contingent at Fryeburg, is quite the opposite. Prior to moving to Maine, we see how reserved and studious he is, composing a piano ballad for a video message to be shown to his soon-to-be classmates. Later, in the dormitories, he prefers playing World of Warcraft to socializing with his peers in the evenings. His father studied in England when he was a young man, and wants to bestow upon Harry the same opportunity and benefits that come with being abroad. Though Stella and Harry exhibit contrasting dispositions, the traditional, patriarchal Chinese attitude may also help explain their differences. Harry, the oldest—and only—son in his family (also the first grandson in several generations) bears intense pressure to succeed in a way that Stella doesn’t.

Both sets of parents, in their own ways, articulate desire for their children to study overseas, citing America’s position as a world leader, an ambition for the teens to become part of a new cultural elite, and a longing for opportunities that they themselves didn’t have access to. The underlying expectation, though, is for Harry and Stella to eventually return home to China.

As Wang notes, Fryeburg, Maine is the sort of small, American town where everyone grows up there and never leaves. Thus, as one might imagine, it’s a culture shock for a group of young foreigners who come from predominantly urban areas that make Manhattan look like a joke. There’s a certain disillusionment on the Chinese students’ part, as they realize that life in America isn’t as happy or simple as our sitcoms and movies make it out to be. None of them have ever been so far away from home, so it’s with comfort that they congregate periodically at a local Chinese restaurant for dinner (probably Fryeburg’s only one).

The camera follows Harry and Stella in and out of the classrooms, catching cringe-worthy moments of casual racism—not just from fellow students but from some of the teachers too. It’s obvious that none of them are trying to be malicious, but all the same it reinforces negative stereotypes of Americans; tone-deaf and narrow-minded. Others don’t like that the group speaks Mandarin amongst themselves but, like the hot pot and noodle dishes, it’s another link to the homeland; a way to feel close to their culture and identity while immersed in such an alien environment.

Although Maineland was shot several years ago, Harry and Stella’s experience is the rule, not the exception. A producer for the film, in the post-screening Q&A, stated that it’s not just the elite—most middle class families are sending their children overseas, saying they’ve “lost hope in education in China.” Thus a symbiotic relationship has emerged. Boarding schools like Fryeburg that have faced declining domestic application rates of late are actively recruiting international students to make up the difference, and in large markets like China there is essentially an endless pool of prospective students.

And it’s not just small, private institutions taking advantage—everyone from Seattle Central College to the University of California network is doing it too, especially since they can inflate tuition costs for international students. A family friend and US diplomat who has spent years stationed in Asia admitted that while she had qualms approving student visas for Chinese youths who had barely passed high school and were pursuing higher education in America, other did not, knowing the financial incentive for colleges and universities here to accept them.

Maineland works so well because its subjects are so malleable and naive. Even though the camera captures nuances that the students may not consciously register, like a discreet “English-only” sign in the common room, oftentimes the most powerful moments lie within Harry and Stella’s revelations; how their views of both China and the US have changed, and how they’ve changed themselves. Equal parts coming-of-age story and cross-cultural discourse, Wang’s film is an intimate portrait of how globalization affects everyday life.