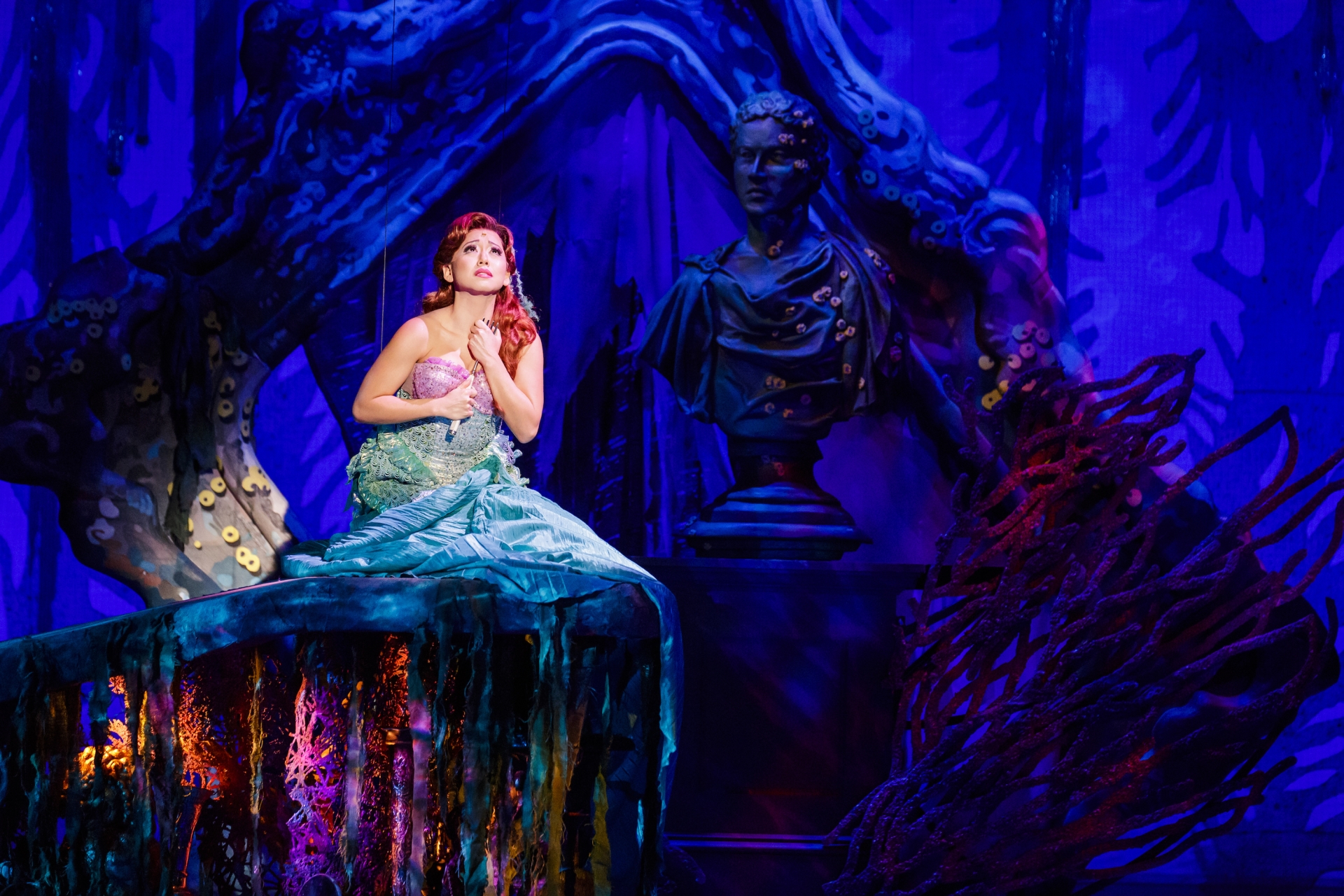 Disney and the winter holiday season have long brought extra light to the dark season, and the 5th Avenue Theatre is joining in the festivities with The Little Mermaid.

Actor Diana Huey, raised in Washington state, is enjoying playing the title role in this production. “It’s a dream come true to get to do this show,” Huey said. “The Little Mermaid was my favorite Disney movie as a kid and I grew up watching the movie over and over again, singing every song and pretending to be Ariel.”

After a Disney-filled childhood, Huey decided to take the next step. “I first got into the arts in middle school,” she said. “They did a musical every year and in 6th grade I got into Oliver, and I was pickpocket number 47 from the left, but it was so much fun and I definitely got bit by the acting bug.”

The formative experiences continued as Huey approached adulthood. “Later in high school, at Kamiak High School in Mukilteo, we did a production of Les Mis and I got to play Eponine, which was such a dream role,” she said. “It was that specific experience that made me go ‘I don’t want to just study music, I really have to also study theatre.’”

But Huey’s big role in The Little Mermaid didn’t come easily or immediately. “Last year around this time I was unemployed,” she said. “I had just come off of a show and didn’t really do a full production for a full year.”

This is typical of the actor’s life, even now that Huey has moved to New York. “There are only so many jobs available compared to how many actors there are, so you’re always fighting for those jobs” Huey said. “I love doing the workshops and readings and concerts in New York, but it’s so hot and cold.”

Huey’s schedule is definitely hot now. “This rehearsal process was fast and furious because half the cast had already done the show in previous productions,” she said. “For those of us that were new, we were just swimming along trying to keep up.”

The flying element of the performances is key to the show’s atmosphere. “To make it look like we’re swimming, we’re flying,” Huey said. “We’re wearing harnesses and are swimming through the air on wires, so it makes the whole stage look like the deep, deep ocean.”

Huey reports that this was one of the biggest challenges during the rehearsal process. “It’s become second nature now, but it was really hard to incorporate during rehearsals,” she said. “We’d get notes like, ‘Don’t forget to swim! Don’t forget you’re swimming!’ It felt very weird at the time, but doing those things to make it look like our world is underwater makes a huge difference to the audience.”

The audience is a key focal point for Huey. “What’s cool about this show, because it’s a show for families and it’s a beloved movie and a musical, any time it starts to feel monotonous I think about those girls and the kids that show up in their costumes and are seeing it for the first time,” she said. “That’s really all you need—giving them everything you’ve got, because they deserve it.”

Monotony could be a concern, because The Little Mermaid is expected to tour for a full year. “It’s tricky, but I’m so excited to tour,” Huey said. “I’ve never done anything this long before, so I think it’ll be really fun and exciting to see cities that I would have never seen before.”

She reports having strong support for this career choice. “My boyfriend is great,” she said. “He’s in New York and he’s planning to visit as much as possible and using the opportunity to travel as well.”

The itinerant lifestyle has required Huey to develop new strategies to maintain her health and energy. “I’ve definitely gotten into a routine,” she said. “I get 8-10 hours of sleep, then I get up and workout to get my body ready and the blood flowing and help sweat things out of my system, then I warm up for about 30 minutes to an hour in the shower.”

But Huey says that the grueling schedule is certainly better than the alternative. “Anytime I get tired, I’m going to remember how frustrating it was when I wasn’t working,” she said.

She wants to take this gratitude and project it outward to her spectators. “I love showing the audience that anyone can be a Disney princess, they can be anything they want to be, and dreams come true!”