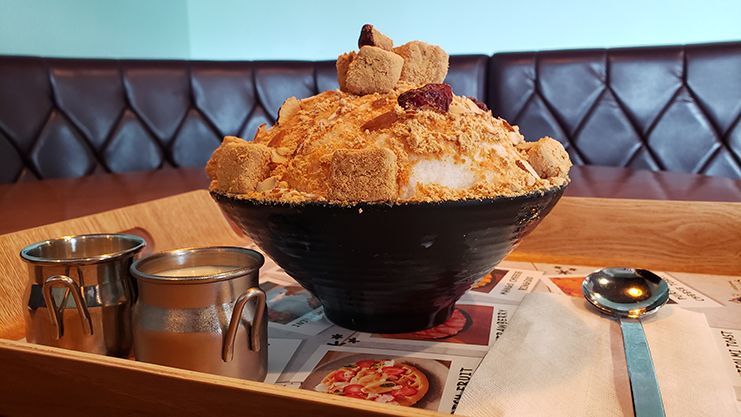 Milkie Milkie, a dessert cafe that opened early this year in Edmonds, was the sort of dream owner Ivy Lu carried with her when she first came to America nine years ago with her Chinese American husband. She had previously worked as an assistant in a law firm in Beijing and knew the language barrier would pose problems in finding a similar line of work. Her love of cooking and a lifelong interest in desserts, nurtured by her grandfather who had run a confectionary store for over 30 years, led her to think about entering the food industry.

Noticing a trend in Asian countries and major cities in Canada and the U.S., she settled on a dessert restaurant that specialized in Korean bingsu, a shaved ice dessert that had red bean paste, condensed milk and other sweet toppings like fruit as its basic setup. Korean bingsu has evolved since the days of the Japanese occupation to include more modern toppings such as ice cream, cheese, brownies, tiramisu, Lotus and Oreo cookies, and even macarons. After extensive research, Lu noticed that there wasn’t a strong bingsu presence in Seattle and decided to capitalize on the bingsu vacuum.

“In the beginning, I wanted to open any Asian restaurant, and I had different choices,” she said. “But I finally decided that bingsu is new for Seattle and started doing a lot of research.”

For two years, Lu visited several different bingsu stores in Los Angeles, Vancouver, Toronto and China. Exposed to a wide variety of choices, styles and specialties, she came up with myriad possibilities that might cater to the tastes of the young and old in Seattle’s diverse population, stockpiling many ideas for the future.

Almost 11 months after the opening of their first store, Lu is in the process of opening up a second branch in the Chinatown-International District, close to Uwajimaya and next to Oasis Tea Zone. “If we open there, I think there would be a lot of visitors, so we don’t need to do too much marketing,” Lu said. “Whenever people walk by, they’ll know Milkie Milkie’s there, and it will make our store more popular.”

Lu speaks from experience since the power of social media and word-of-mouth helped spread the word about her business when it first opened in February. In the beginning, her customers were primarily Chinese or Korean, but now it includes Caucasians, Latinos and Indians. She always asks her cashiers how many new customers came into the store each day, and from their reports, Lu estimates the number hovers around 40 percent.

“I think the market will be huge,” she said. “I am thinking of ways to introduce it to more Americans.”

Lu estimates that the second branch will open early next year, possibly during the winter. Since the store has yet to pass the city inspection, bingsu fans will need to wait a tad bit longer for its doors to finally open. Already receiving inquiries about franchise opportunities, Lu wants to postpone such grand plans for a later point in time. For now, she wants to focus on perfecting her brand.

A quick look at Milkie Milkie’s menu shows a mix of modern and traditional choices, catering to people of all ages. For more traditional tastes, there are the black sesame bingsu and injeolmi bingsu (injeolmi is a soft rice cake covered in nutty-tasting soybean flour that Japanese people call ‘kinako’). For more modern tastes, there are strawberry cheesecake bingsu, mango bingsu and chocolate bingsu. These are part of their signature collection, available year round, but they also have seasonal flavors such as watermelon and pineapple, which they change each year.

“We always use our own recipe,” she said, “but I do the research and do many, many tastings.”

Lu has also added typical Korean street fare to the menu, such as ‘boong-uh-bbang,’ the Korean equivalent of Japanese ‘taiyaki,’ and Korean egg bread, where a bread mixture is cooked with an egg on top until both are fluffy and golden brown. She has also added takoyaki, Japanese fried octopus balls, and Korean pumpkin porridge. Lu also has a variety of other snacks, such as toasts and waffles, and a selection of coffee to choose from thanks to her business partner Claire Kim, whose experience as a manager in Korea’s popular bakery chain Paris Baguette allowed her to apply her know-how about the business through the employees’ training.

“When she moved here, she did research on Yelp to find a bingsu place, but she couldn’t find it,” Lu said. “When I first rented this spot in Edmonds and put some posters on the window, she saw it, and since I know a lot of Korean people, we managed to get introduced through a friend’s friend two years ago.”

Although opening up a food business had been her dream for a long while, she only started her research two years ago because she had been busy working with her husband on his construction business, Sunshine Construction, which remodels residential property. In the aftermath of the 2008 recession, a large number of foreclosed property provided them with an abundance of work from Freddie Mac, otherwise known as the Federal Home Loan Mortgage Corporation. Lu was extremely busy since she was marketing, hiring and bidding for projects, subsequently postponing her business plans, even her plan to have children, for six years.

Compared to her past work, which mainly consisted of office duties, one of the biggest hurdles to opening Milkie Milkie was getting used to the customers. “When I decided to open a restaurant, I needed to talk to different kinds of people, so that took some time to learn,” she said. “Some people are easygoing and some are picky, so I needed to learn what they liked and didn’t like and how to talk to them.”

She also had to get used to the unstable schedule of her employees, most of whom are students, leading to high turnovers. From the first day Milkie Milkie opened its doors, her parents have remained her emergency backup workers: they always become her substitute employees in case she has a shortage of people to run the store on any given day.

“I would say to open up a restaurant at the beginning, the hiring is difficult,” Lu said. “Some people come and then they leave. Some people are sick, so they can’t come to work. You really need family to support you. If I just had myself, I couldn’t do it.”

Despite these sporadic changes, Lu has learned a lot from her employees through their various work habits. “Everyone has their own specialty,” she said. “Some workers are quiet, but they’re organized. Some are very good at selling. There’s something you can learn from every one of them.”

As a female business owner, she has found it easier to navigate through bureaucratic matters since people were more willing to help her. Overall, she doesn’t see the necessity to distinguish a female owner from a male one. “A female can do everything a guy can do. There’s no difference,” she said.

With her first year in business coming to a close, she feels happy and proud of what she has accomplished so far and is deeply grateful for all the help she has received.

“My business has been successful. I have spent so much time on it, so I am very proud of myself. When people say they know the store, I’m so happy,” she said. “I appreciate my business partner for all the help she has given me from the management side, and I really appreciate my family. Without them, I can’t open.”

For more information, go to www.milkiemilkie.com