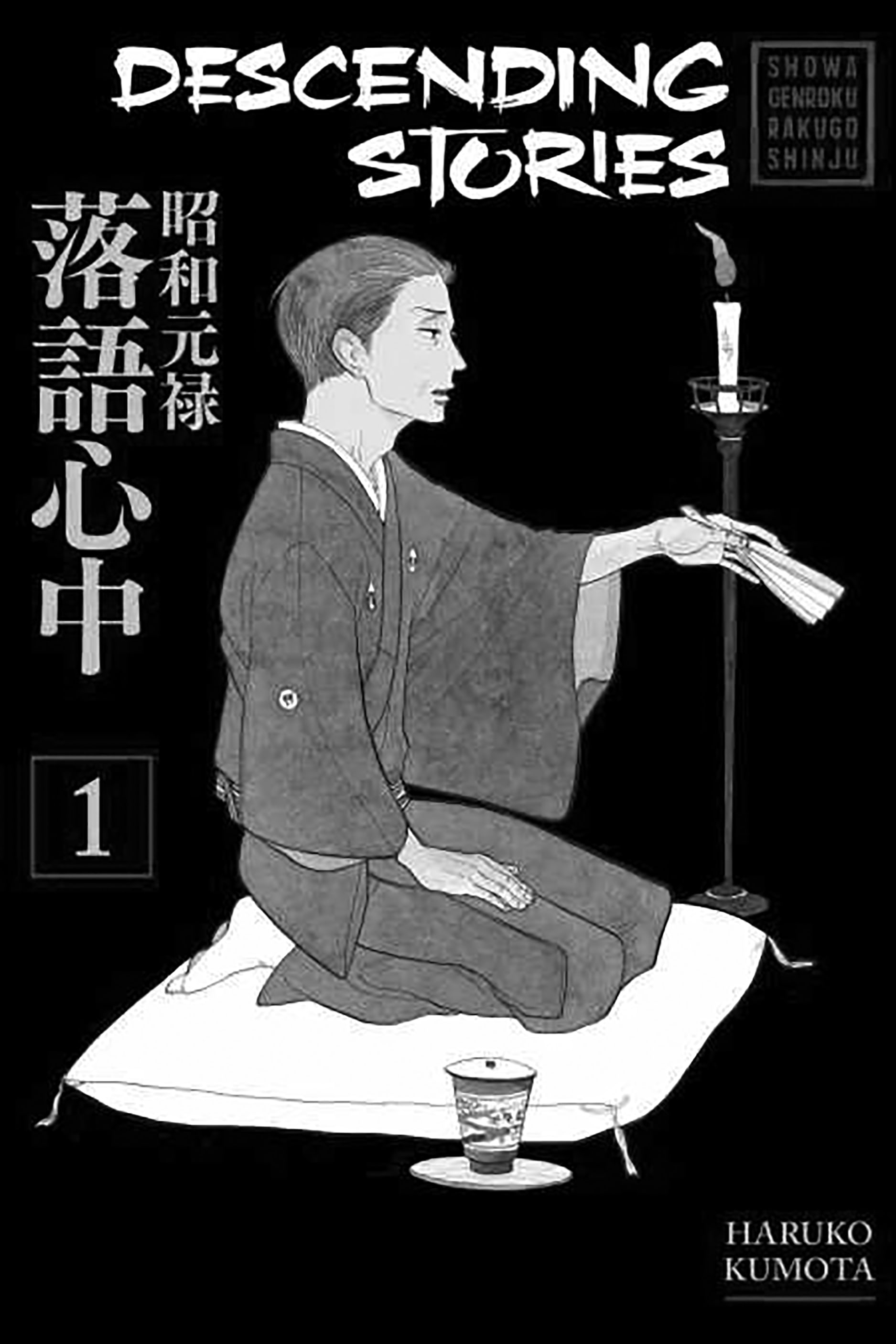 When thinking about Japanese performing arts, it’s very likely traditional comic storytelling wasn’t the first thing that came to mind. Unlike its extravagant and highfalutin cousins kabuki, noh and bunraku, the art form rakugo could be thought of as their down-to-earth, comical and folksy counterpart. It is minimalist in nature and strives to get a laugh out of the audience through a myriad of stories that touch upon universal human experiences using characters that vary from feudal lords and emperors to peasants and beggars, even ghosts.

Rakugo translates to “falling word,” which refers to the punchline of the story. It consists of one storyteller, the rakugo-ka, who sits on his knees on a cushion set on an almost bare stage with only two props in his arsenal: a fan and a Japanese hand towel, used to depict long and flat objects, respectively. Although rakugo gets its origins from Buddhist monks who embellished their sermons with dramatic stories to keep their audiences riveted, it got an upgrade from performers who began to parody these stories during the Edo period (1603-1867), first out on the streets, then gradually to vaudeville-type theaters called “yose.”

Manga author Haruko Kumota has written a series that delves into this world called “Showa, Genroku, Rakugo, Shinju,” which Kodansha Comics has translated simply into “Descending Stories.” Serialization began in 2010 in Japan, but the North American versions were released in 2017. The tenth — and last — issue is due to come out at the end of this month. Two seasons of anime adaptations have already been released, and a live-action series premiered in October in Japan.

Kumota weaves an intriguing story filled with suspense, mystery, drama, comedy and complex human emotions that seem to imitate a rakugo story itself. At the core of “Descending Stories” is a web of human relationships that seem to emphasize how we are all connected to one another and how it is impossible to go through life alone, even if one tried. For Japan enthusiasts, this is a great way to explore an area of Japanese culture that is not well-known in the U.S.

Fans of late-night television and stand-up comedy who also like graphic novels might find this manga of interest as many successful elements of both comedic forms are present in rakugo. It just goes to show that comedy technique crosses all cultural borders; with the proper content and execution, the idea of foreignness evaporates as all people enjoy the shared experience of laughter and hilarity.

Unlike American stand-up comedy, where a series of vignettes and anecdotes are drawn from the comedian’s personal experience, the stories drawn from a rakugo-ka’s repertoire are often from a collection of 300 stories that have mainly been passed down through word of mouth. These stories are mostly in the form of a conversation between two or more characters, much like the script of a play, but the solitary rakugo-ka is acting out all the parts, seamlessly switching characters by using distinct changes in mannerisms, behaviors, facial expressions, speaking styles and movements. The minimalist nature of rakugo and the superb acting skills of the masterful storyteller encourage audience members to use their imagination. One story can last anywhere from 10-40 minutes.

The only way to become a rakugo-ka is to study the art as an apprentice through one of the rakugo masters. This apprenticeship normally takes three to four years. It is common for the apprentice to receive a name from the master during his training, and, if he is found worthy, to take on the master’s name after his death.

During the apprenticeship, the apprentice is at the master’s beck and call 24 hours a day and can be under strict rules that forbid activities such as drinking, smoking or even dating.

Although this can be trying, it gives the apprentice the opportunity to live and breathe rakugo, which is basically learned by watching and imitating the master. Once a story has been mastered, the apprentice is free to inject his own interpretation of it to give it his own flair. Rakugo stories cover all genres, but every story from beginning to end has opportunities where the storyteller can draw out laughter from the audience through his rendering of the characters.

The three levels for rakugo from lowest to highest are zenza, futatsume and shin’uchi. Like much of Japanese traditional theatre, rakugo is a male-dominated profession, and for a long time, was only open to men. Today, there are around 700 professional rakugo-ka, around 30 being women.

“There’s a promise I made to Sukeroku I wasn’t able to keep. It was to find the way forward for rakugo. To keep it alive. Neither he nor I could do it alone. So I need you to fill this hole. If we fail, we die together. Double suicide.” –Yakumo Yurakutei VIII to Yotaro

Kyoji, a young man just released from prison, heads off to a yose to ask his favorite rakugo-ka master Yakumo Yurakutei VIII to take him on as an apprentice.

Although Yakumo is well-known in the industry for his refusal to take on apprentices, something about this man appeals to him. Giving him the name Yotaro, which Kyoji later finds out is a common name given to foolish characters in rakugo, Yakumo takes him into his home, where Yotaro is introduced to Konatsu, the daughter of deceased legendary rakugo-ka Sukeroku Yurakutei II, whom Yakumo adopted after Sukeroku’s untimely death. What Yotaro lacks in refinement, he makes up for with his charisma, earnestness, diligence, buoyance and exuberance; he is liked by many from the start.

At first, the series seems to have a simple premise with blundering Yotaro as its protagonist, but as the story progresses, it becomes clear the main conflict revolves around Yakumo and the guilt and sorrow he carries over the death of Sukeroku and Miyokichi, Konatsu’s mother. Konatsu is a constant reminder since she blames him for her father’s death, going so far as to accuse him of being her father’s murderer. Although she is naturally stubborn and independent with a fiery temper, her relationship with Yakumo has always been dicey and precarious since her father’s death.

Yakumo’s deadpan expression and stoic nature belies a tortured soul that is regularly haunted by his old friend Sukeroku, whom he feels is the rightful heir to the Yakumo name. Both abandoned by their families, they had trained under their master from a young age. Rakugo came more naturally to Sukeroku; for Yakumo, who was known as Kikuhiko at the time, it was a struggle to find his own voice and style in the art form due to his perfectionist nature. Although a loner at heart, he discovers the joy of rakugo and unearths his motivation for pursuing and developing the art through his budding bromance with Sukeroku.

Dependent upon Sukeroku for inspiration in his art and realizing how empty his life is without him and Miyokichi, the two closest people in his life, Kikuhiko drops his decision to live on his own. “You can never share everything with another person, but people still live together,” he says to Sukeroku. “Even if we haven’t got anything worth sharing, we still love to try. Maybe that’s why we don’t end up alone.” Unfortunately, as he comes to this realization, Sukeroku and Miyokichi die tragically.

Yotaro reminds Yakumo of Sukeroku and is somewhat surprised when Yotaro asks to carry on the Sukeroku name. Like Sukeroku, Yotaro is determined to keep rakugo alive by making it more accessible to people through different forms of media, even though purists like Yakumo, who believe it should only be performed in a yose, are against it. As Yakumo gets too old to continue with his profession, he feels useless and starts losing the will to live, but as a rakugo-ka, he sees he has too many loose endings in the story of his life and does not want to die.

Will Yotaro succeed in helping to keep rakugo alive? Will Yakumo find the peace he has been searching for all his life? Find out by starting the series today.