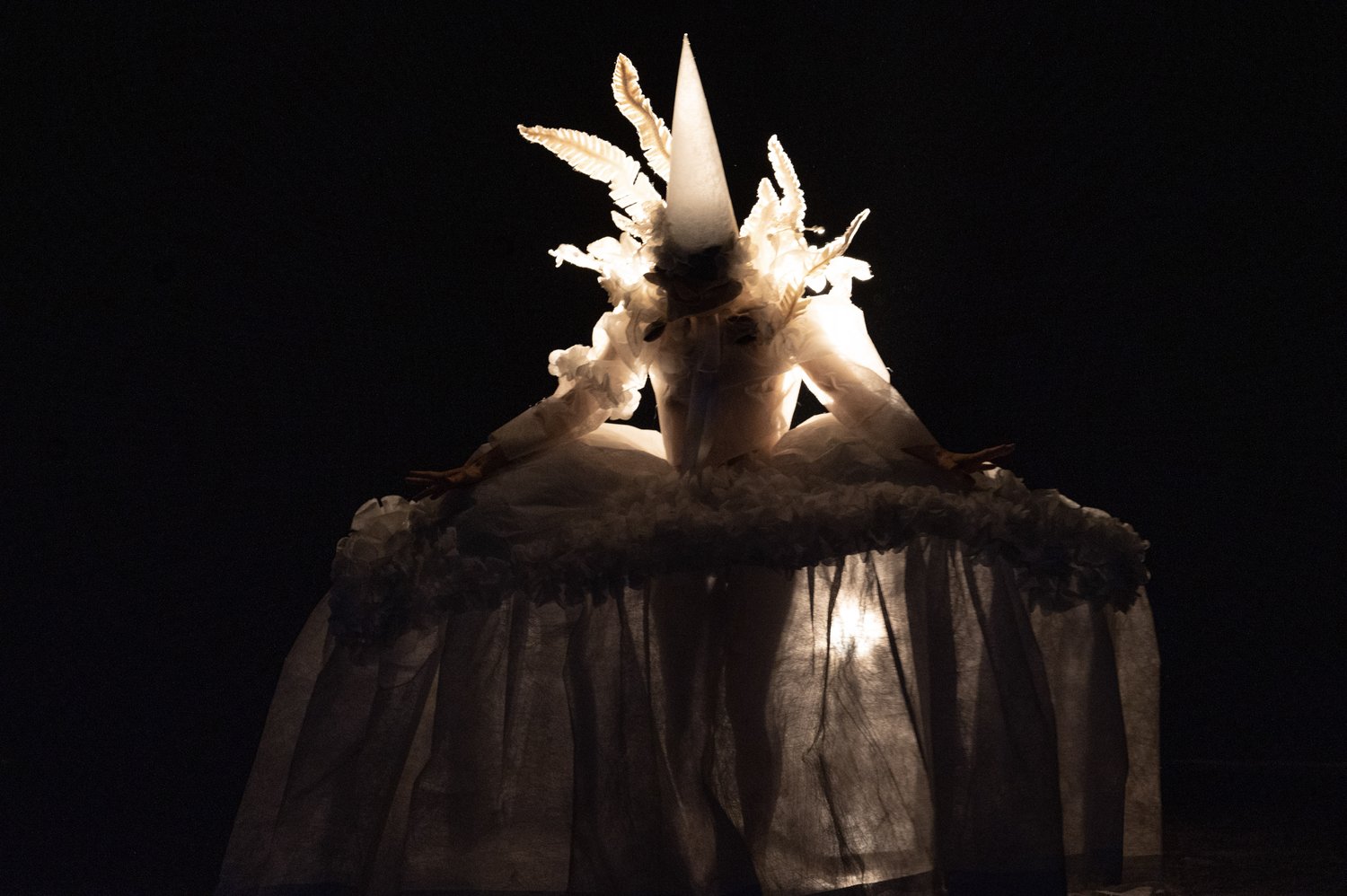 As performance spaces open back up following the COVID-19 pandemic, many local performance groups are beginning to present on Seattle stages.  In June, On the Boards will host numerous performances, including Skeleton Flower by Degenerate Art Ensemble.

Skeleton Flower is based on an amalgam of three stories chosen by Artistic Director Haruko Crow Nishimura, including The Fitcher’s Bird, The Wild Swans, and The Red Shoes.  “These and similar stories were read to me by my mother in my childhood, so they live deep in my subconscious,” Nishimura said. “I also very much associate them with love from my mother and are tied in some deep emotional way to her.”

The stories, Nishimura says, are also about defiant young girls who are struggling with their environments.  “In the Fitcher’s Bird, a girl uses wit, creativity, and magic to outsmart a violent sorcerer,” she describes. “Red Shoes tells the story of a girl boxed in by a rigid cultural context that punished her for her desires.”

Degenerate Art Ensemble (DAE) recently performed this piece at a festival in Mexico, which DAE Creative producer Joshua Kohl reports was curated around the concept of ancestry and spirit.  “After seeing Skeleton Flower, the curator, who himself is a renowned Mexican choregrapher, spoke about seeing a strong similarity between Latin American and Japanese cultures in regards to the living connection and relationship to ancestors,” Kohl reported. “One of the works from a collective of South American dance artists was exploring the Columbian way of looking at mental illness as something to be revered, and how the society views those with mental health issues as having special insight and wisdom to share with their communities, not necessarily as a problem to be medicated.”

Kohl says that he and Nishimura appreciated this perspective.  “Our work Skeleton Flower is very much dealing with the relationship between mental health,” he said, “and the challenges around untangling the difficult karma that is passed down from ones ancestors.”

For Nishimura, these stories raise a lot of questions.  “The Red Shoes in particular —  how a culture would outcast and punish a girl for wearing a pair of red shoes to church, punishable by death,” she mulled. “She was an orphan being integrated into a society in which she didn’t know the rules, and yet there was no care or value for her as a unique human being, instead of the adoption being a transition to a safer environment,”

Nishimura explores her own questions alongside these three stories, making Skeleton Flower semi-autobiographical. “I chose these stories because I felt in many ways my personal story is one of struggling with society as a woman, as an immigrant, and as an artist,” Nishimura described, “and I think these archetypal stories offer clues to us as we navigate the world around us.”

Since that performance in Mexico, DAE has continued to refine this piece.  “The work references very specific fairytales, and it is a fine balance as to how much of these sources we want to literally reference and how much is ok that we reimagine and leave somewhat up to the imagination,” Kohl said. “We are not merely retelling existing stories, but rather creating new mythologies that dance in conversation with them. We think of this piece as a storytelling ritual, in which we are inviting characters from these powerful fairytales to mingle with moments of personal reality.”

Looking ahead, DAE have several plans on the books.  “We are extremely excited to perform Skeleton Flower in Denmark at the Hans Christian Andersen Festival in August,” Kohl said, noting that DAE will then perform the show in San Francisco before returning to Seattle to begin a new project.  “We are currently deep in development of a new work that explores Animism and the human being’s relationship to nature, which will premiere some time over the next year or so.”