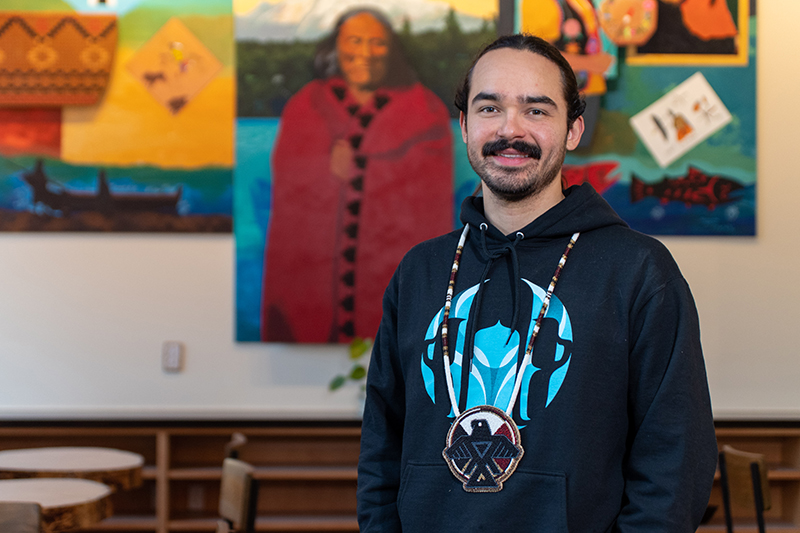 Located in the heart of Seattle’s Pioneer Square, Chief Seattle Club’s ʔálʔal Cafe made its grand opening on November 29. The cafe’s name is pronounced “all-all” and is derived from the Lushootseed word for home.

Its menu is centered around “reclaiming and reintroducing traditional Indigenous foods” to Seattle and has become a place filled with indigenous art, music, and community.

ʔálʔal Cafe is a part of Chief Seattle Club, an organization dedicated to supporting indigenous people through services such as food, health care, and housing assistance. In partnership with Chief Seattle, the cafe was able to build an indigenous space from the ground up.

“We were able to take ownership of the process from start to finish,” Manager Anthony Johnson says, “We had indigenous values throughout the whole process rather than being told what to do by non-native companies.”

As a result, the cafe has a mission of filling the gap in the Seattle market where representation of indigenous foods doesn’t exist.

Their revolving menu is filled with high-quality ingredients sourced from other Native-owned businesses such as bison from the Cheyenne River Sioux tribe or coffee beans from the Indigenous Coffee Company Salish Grounds.

“I don’t believe there’s been adequate representation of pre-colonial foods in Seattle to date,” Johnson says, “We want to further the mission of indigenous foods and showcase those foods to the public.”

“Seattle has such a diverse population of tribal nations, I wanted to look in the region itself but also look across the nation to highlight different ingredients from all those regions.”

Johnson’s own tribe is the Red Lake Chippewa from Northern Minnesota. He sources the cafe’s wild rice and maple syrup from his own Northeast region.

“It’s difficult to separate us from wild rice,” Johnson says, “It’s so intertwined in the history of our food and how we became as people.”

Along with wild rice as a staple food, an important ingredient for the Red Lake Chippewa is maple syrup.

“Every spring, with the addition of a new year, you have a hard frost at night and a warm spring day in the morning,” Johnson says, “This ebbing and flowing of temperature pulls water in the tree and sap starts to run all day long, creating syrup.”

Johnson says there’s quite a few traditional teachings about syrup and how the importance of its process. To represent the Northeast region, Johnson took these two ingredients and created the cafe’s Wild Rice Coffee Cake which is made from blended wild rice and maple syrup.

“It’s not a completely decolonized dish because there’s butter, sugar, and flour—but it has an indigenous twist to it.”

When talking about decolonizing foods, Johnson explains it’s about asking which foods are indigenous to North American land. Foods that were brought here by colonizers are less healthy and create adverse health conditions such as diabetes, hypertension, etc.

“You simply can’t compare the proteins that were brought here by the colonizers to the wild game that inhabits this country,” Johnsons says, “There’s no comparison between eating venison and then eating pork—there’s higher protein, less saturated fat, and less cholesterol in venison.”

However, the cafe is not all about committing to a strict menu.

“I don’t think we have to be idealistic and pure with a fully decolonized menu—the wild rice coffee cakes being a good example,” Johnson says. “If anything, it opens up a dialogue between people where they ask ‘what’s wild rice?’ or ‘who’s that food important to?”

Johnson wants customers to have these types of conversions. And having a mix of foods that includes familiar and indigenous ingredients presents the cafe’s food in a way that is palatable to the Western world while opening conversation.

“I want people to enjoy the food here,” Johnson says, “I don’t want to serve something that is so void of familiarity that people aren’t excited to come back..it’s about trying to find a balance between those two things.”

And for the cafe’s indigenous customers, ʔálʔal has been able to bring back childhood comforts with their menu.

“I haven’t had blue corn mush since sitting at my grandma’s house back home in Tohatchi, New Mexico (Navajo Nation),” one comment card says, “Warm fuzzy feels since crying in a coffee shop is odd. So happy you are here.”

It’s moments like this that remind Johnson and his other employees the meaning of “ʔálʔal.” They’ve been able to find a home for themselves and others while working for their own indigenous community.

“Everything we have here is indigenized including the employees so it’s literally created the name for us all,” barista Vanessa Gloria says, “It’s created a home.”

For employee Niki Zacherle, the cafe’s cedar tea has become her favorite menu item. The tea is a reminder of her own Colville tribe who use cedar for food, medicine, clothing, and shelter. ʔálʔal serves cedar tea free of charge every morning.

“Cedar is a very important medicine,” Zacherle says, “All of my bands that are from the Colville tribe use cedar…It’s a great way to start the morning and really uplifts your spirit.”

Though Johnson is excited about the community ʔálʔal has built, he wants to ensure that the focus of the business is to support Chief Seattle club and educate the public on the work the club has been doing.

Chief Seattle Club recently opened another 80 units of permanent housing in Pioneer Square for their formerly unhoused Native community and are working to add more in the upcoming year. At its core, Chief Seattle is a housing and human services agency committed to helping Native people, many of whom are experiencing homelessness.

“That’s the mission that we’re trying to carry out,” Johnson says, “And to come in here and support that is something that every Seattlelite should do.”

The cafe shares a kitchen space with Chief Seattle Club as well, where the club puts out a free breakfast and lunch everyday for their community that’s filled with high quality indigenous foods. Anyone needing a hot meal can arrive at the club open from 7 am to 3 pm.