White women are caught between patriarchal structures that are enforced by men and racial hierarchies, which they benefit from even when they don’t actively seek to reinforce the oppression of people of color. In this in-between space, white women sometimes find it difficult to address issues of race and ethnicity in a productive manner. Mixed-race activists Sara Blanchard and Misasha Suzuki Graham created Dear White Women, a series of podcasts, a website and a book, to help white women out.

Blanchard and Graham met 25 years ago, and developed separate careers over the decades, but two and a half years ago, they launched this new project. “I was saying I was working both raising my kids and life coaching, but what I was actually doing was projects relating to anti-racism,” Blanchard said. “As our conversations grew deeper around the hopes and fears we had for our children, and as we both felt we were ready to make some shifts in our work lives, it felt like the right time for us to consider collaboration.”

Graham reports that Dear White Women is a natural extension of her previous work. “Growing up biracial, race and identity was always something that was at the forefront of my consciousness and was constantly a reminder to me of what it felt like to be the other, even from my made-up name!” she said. “It was that lens of wanting to give voice to the voiceless that led me into my legal career, with a sidestep into corporate DEI work, all with a focus on how do we make sure everyone’s voices are heard and everyone is represented.”

Like Blanchard, Graham found particular motivation rooted in motherhood. “My fears for my multiracial sons is the driving force behind the creation of the podcast for me,” Graham said, “and my legal background and love of history and research helps provide a lot of the structure around how we’ve gotten to where we are and what the barriers are to truly addressing systemic racism, at least structurally.”

The Dear White Women website hosts 140 webcasts on various aspects of racism, and Blanchard and Graham relate that the most popular podcasts are Episode 63, How to Be an Ally, as well as their first two podcasts on starting challenging conversations and why white people should care. 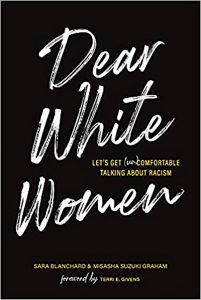 More recently, Blanchard and Graham have reformatted their work into book form, with the publication of Dear White Women: Let’s get (un)comfortable talking about racism. “We realized early on how distinct audiences are in general, our Instagram audience is different from our podcast audience, for example,” Blanchard said, “and so it only made sense to create content that could reach people who want to know what they can do to be more anti-racist, who might not be podcast listeners.”

Graham, too, was seeking to expand the anti-racist community in support of the next generation. “My why behind writing this book was to save my kids’ lives,” she said. “So it naturally makes sense that I need everyone in this discussion, because the minute my kids leave my house, they are in everyone else’s hands.”

To write the book, the pair divided up the book’s potential topics. “It felt very natural for us to choose which sections we would each focus on, and once we came up with the structure of the book and chapters, creating the content came fairly easily,” Blanchard recalled. “I was so grateful to have Misasha, who is a very natural writer, as part of this process, as she put up with me moaning and groaning through the painful revisions!”

Now Blanchard and Graham are on tour to promote Dear White Women and its theme of embracing discomfort talking about race. They were recently at the University Bookstore in Seattle on November 19. “The great part about these events is that every conversation is so different, depending on who’s in it,” Graham said. “We talk about topics that have typically been considered taboo, and I think people know that we are welcoming rather than cancelling once they hear us talk about the book, so they ask the tough questions, and we model those uncomfortable conversations in real time!”

Blanchard describes how rewarding these interactions have been. “I remember being at a bookstore event in San Francisco, and some of the questions that were asked included comments about how we can welcome more white women into difficult conversations about racism, when so many are afraid to speak up for fear of being cancelled,” she remembered. “At multiple stops, women of color have told us they’ve read the book and are planning to use the guide as a gift for their white friends, so they don’t have to keep explaining when they’re so tired of explaining this themselves.”

But there’s a tension between an assertion on the Dear White Women website that states “talking about race doesn’t have to be scary,” while the book’s subtitle is “Let’s get (un)comfortable talking about racism,” and Blanchard and Graham navigate that space between confronting and reassuring white women. “I have been told by white women that they don’t want to talk about racism with their White kids because they don’t want to traumatize their kids,” Graham said. “And I have to say, that is a privileged stance.”

Graham discusses racism regularly with her sons to promote their own survival as young Black-Asian men in the U.S. “The fact that some see discussing racism with their kids as an optional activity speaks to how we aren’t seeing each other as humans first,” she said. “And so I think a lot of this work is truly seeing each other as humans, and understanding that we can relate as mothers, as parents, as people who love and want to protect their kids.”

Both women are optimistic that they, and everyone else, can make a difference. “My main purpose in the work I do is to be heart-led and welcome more people into the conversation, because I feel like the skills of critical thinking and introspection and self-reflection are really important not only to anti-racism, but also to being a happier, more fulfilled human being in general,” Blanchard said. “We can take small steps in our very own spheres of influence, and if we stay focused on why we want to make change, and how we can speak up and make new choices every day, we can really shift the future in a better direction for all of us.”

Graham agrees. “For many of us, depending on when we grew up, we were taught not to talk about race,” she admitted. “I’m here to say now that our future really depends on us affirmatively talking about race, not only because we need to think critically about what we’ve been taught and by whom, but also because this is something that has divided us for so long, on so many levels.”

Both women see this project as a way to embrace our multi-faceted inspirations. “While talking alone doesn’t change things, talking which leads to action does,” Graham said, “and I think we need to keep focusing on our own why, and include more people in the conversation, to get to the action part, which may look different for everyone.”

The pair say Dear White Women is therefore not just a letter, but it will ideally bring about results. “Leaning into your own realm of genius, and trusting your gut, you’ll know what actions may make sense for you,” Graham encouraged. “I want to give people a push towards action, to say that it doesn’t matter how small something may seem, it may end up much bigger than you in the end.”