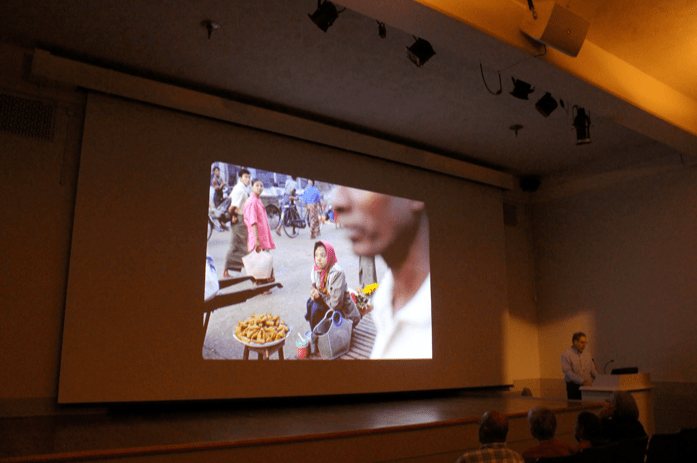 Daybreak in Myanmar: Connecting with the World through Photography showcased Hiller’s pursuit of well-lit photos, but deeper than a store beaming iridescent lights or cooking flames glowing behind his subjects, his images emphasize lesser-told stories.

They translated experiences of everyday Burmese life; a nation challenged by poverty, civil war amongst ethnic and religious groups, and governmental oppression. Myanmar is going through what can be understood as a catch-up period over the last three years, said Hiller.

Since Burma’s democratic reformation and international opening in 2011 the country has rushed to establish a new social and economic era. And while that remains, Hiller’s images—spanning over 28 years and 18 trips—depict a country that looks relatively similar to his first tourist-granted and only week-long visit in 1987.

“I don’t want to romanticize it. It was a very rough place. Very poor,” Hiller told the audience.

His work is self-admittedly subjective and since he is a visual journalist it’s message-driven. The series provided balanced documentation of a country that is widely misrepresented in the media. Having traveled so much to Burma, Hiller was expressed a sense of pride in educating uninformed audiences.

“[I] show people from the West what it was like over there,” said Hiller.

Simon Khin, the founder and executive of Northwest communities of Burma, appreciates Hiller’s appointed role as a visual interpreter because, for him, the Western perception of his country today is inaccurate. He told me that Hiller’s journalistic influence to fairly depict all areas of Burma is instructive.

And though Burma has made some steps toward democracy there is still upheaval, said Khin. Since the end of British occupation in 1948, civil war surrounding religious discord and ethnic clashes for autonomy remains a struggle.

Hiller related a story from his favorite image about this very tension in the Southeast Asian country.

During a 2013 visit, he stumbled upon a salon open early in the city of Meitktila. Idly waiting on a bench were two women. One was a bride donning a crystal-embellished pink gown and the other a graduate in a cap and gown. The image initially points to progression and cultural adaption but under a critical look, it represents the current social and political disarray in a country that, despite democratic efforts, struggles with gender rights and low funding towards education.

And just three weeks after Hiller caught this unique and isolated moment visualizing Burma’s expected democratic future, this area was the scene of anti-Muslim riots resulting in casualties and proving a common storyline in Burma. Friction between religious, ethnic, and pro and anti-government groups are very much prevalent.

Hiller’s commitment is especially recognized by Khin who believes these images illustrate Burma in an unbiased fashion, compared to what the government tends to show.

Hiller’s work is not only an extension of his his social and political knowledge of the country; it is a lens of accountability. His camera offers a global eye that can cultivate international scrutiny and pressure on a government that isn’t always transparent.

Khin said he was moved by Hiller’s images in an unexpected way—nostalgia.

“Every image and every picture I look at their face and it makes you want to talk to them,” he said, “makes me miss home.”