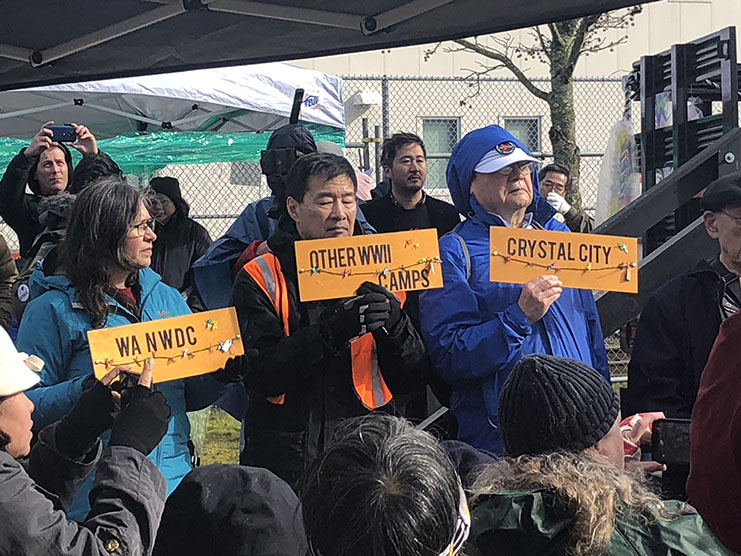 The barbed wire on the fences near the crowd was razor-sharp. The rain and wind whipped around the “No More Concentration Camp” banners and the taiko drums, trying to dislodge the strings of carefully wrapped origami cranes attached to a chain link fence. Over two hours, volunteers took turns holding the tent poles over the Japanese American and Puyallup elders, bringing them extra blankets. Linda Ando’s handmade wooden signs for the remembrance ceremony marked each of the 10 major concentration camp sites, other WWII camps, Crystal City, and a new addition—the Northwest Detention Center (NWDC) in Tacoma.

Titled “Day of Remembrance, Day of Action”, the February 23 protest at the NWDC gathered a multigenerational, multiethnic crowd of about 400 supporters. Organizers included Densho, Seattle Japanese American Citizens League, Tsuru for Solidarity and La Resistencia – a group which has been protesting the NWDC since 2014. This Day of Remembrance drew lines of solidarity across communities, geographies and chronologies.

Puyallup Tribal Elder Connie McLeod offered an invocation, blessing, but also recounted the story of an elder from her tribe whose family had been evicted from their land on Vashon Island to Yakima. Organizer Maru Mora from La Resistencia urged the crowd to make noise to make sure that the prisoners inside could hear the support.

“Today we’re making history but the kind of history we want,” she said, “for our liberation, for our people.”

Mora spoke of the partnership with the event organizers as an “honor,” saying that “[this] is the way partnerships should happen.” Mora translated for Carlos Venegas, a former NWDC detainee who spoke about the conditions inside: subpar food, insufficient medical care and lack of access to legal assistance. “There’s no compassion inside,” he said.

Mora also broadcast a phone call from an anonymous detainee inside the NWDC, who echoed Venegas’s description. Marcela Hernández, an organizer with Detention Watch Network, spoke about campaigns to shut down detention centers in California and Illinois, citing a successful farmworker campaign in McFarland, California.

Speakers from the Japanese American community were also included. Tsuru for Solidarity co-chair Satsuki Ina drew parallels between her father’s dissidence at Tule Lake and the hunger strikes at the NWDC.  She described the psychology of strikers, praising their “courage”: “They are willing to sacrifice their own bodies to protest their incarceration and their indignities that they’ve been suffering.”

Ina’s granddaughter Skylar Tomine reminded the crowd that her generation is “furious…We will be voting soon and we want change.” Musician Kishi Bashi had reached out to Densho and offered his help with the event. “This is my first time performing at a protest,” the violinist said before the program. “All the research I’ve been doing into Japanese American incarceration led me to understand that you need to take action.”

For Tsuru for Solidarity co-chair Mike Ishii, coming to the Seattle area was a homecoming; he arrived just hours after a Day of Remembrance organized in New York with Ina. He performed a spoken word piece (accompanied by Kishi Bashi) and linked Tsuru for Solidarity with organizations like the Detention Watch Network.

“You know, growing up in the community,” he said before the program, “[some of the Nisei and older Sansei] would say, ‘well, the young ones that were born there [in camp], they were too young to remember anything’…And I always thought that was not exactly accurate. That generation of the survivors…they’re leading the charge here…And they are giving permission to every other generation to actually have the conversation about what it was, to talk about it with their families, the trauma and the shame.”

Camp Harmony and Minidoka survivor Paul Tomita is one of those survivors. “It hits home. And we as JA, we do have the moral authority, because you know, I was there. I can actually say, I was there, and I didn’t like it, by the way. They took us [when I was] 3 and 4, so I personally don’t remember Puyallup, but I do remember Minidoka.” He pointed fiercely at the Detention Center, just yards behind the chain link fence around the crowd. “You would think that America would learn in these 78 years not to do this again.”

Reverend Karen Yokota Love brought a multiethnic group of 25 attendees from her congregation in Seattle. Love said that she represented her family members who were incarcerated, but also the Japanese American United Methodist Caucus.

Tacoma artists Anida Yoeu Ali and Masahiro Sugano attended the protest ”[as] a family who’s both Japanese and Khmer,” said Ali.  “We need to stand up for each other, because the Khmer community are currently facing extreme deportations.”

“When we were living in Cambodia,” added Sugano,  “we met quite a few of them who were detained here, prior to their deportation. We know how this kind of facility separates families, and it’s not necessary.”

Yonsei artist Kayla Isomura, known for her powerful artwork, the “Suitcase Project,” brought a group of friends from the Vancouver area of Canada. She called the protest “eye-opening.”

Seattle JACL President Stan Shikuma, who emcee’d the program, concluded with a call to action. “It takes a lot of courage and it takes a lot of stamina to come out and stand out here all this time. And I also want to say that while I admire and appreciate and love all of you [here] for that – it’s not enough,” he said. “I’m asking you to do more.” He drew connections between slavery for African Americans, Native American “boarding schools” and immigrant detention. He also reminded the crowd of La Resistencia’s ongoing actions, about the nationwide work of the Detention Watch Network, about the ongoing legislative advocacy needed to ban all private prisons like the NWDC in Washington State.

Overall, it was a Day of Remembrance like few others – except, perhaps, the first one at Camp Harmony in 1978. Densho director Tom Ikeda noted that the NWDC crowd stood not only within a few miles of the Puyallup Fairgrounds, but also within sight line of Union Station, where the Tacoma Japanese Americans were evicted in 1942.  “[But] Day of Remembrance was always political,” said Frank Abe, one of the main 1978 organizers. “We called it ‘Remembrance’ but that was to create a safe space for the Nisei to feel comfortable coming out. [It was] always about redress…But this has the same feel… it was about taking action.”