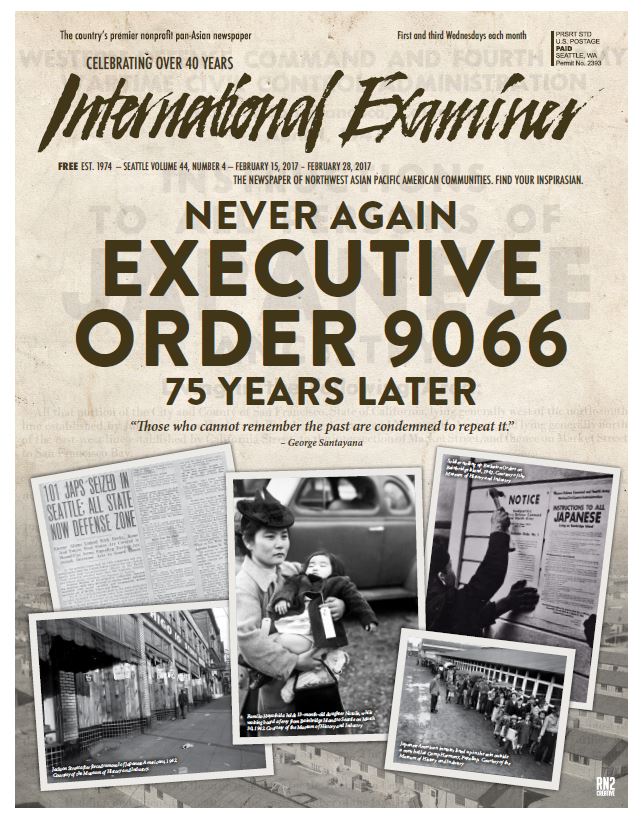 February 19, 2017 marks the 75th anniversary of the signing of Executive Order 9066. The order, signed by President Franklin Roosevelt in 1942, allowed the incarceration of approximately 120,000 Japanese Americans. The first Day of Remembrance was held in 1979 at the Washington State Fair Grounds in Puyallup, according to an essay by Jennifer Ott on Historylink.org. The day is officially recognized by Washington state as a day to remember civil liberties. This year numerous organizations will be holding events to recognize and remember the signing. Below is a calendar of events happening in and around the Seattle area.

This year the Washington State House of Representatives will be observing the Day of Remembrance on Wednesday, February 15th in the House Chambers of the State Capitol in Olympia. Attendees will meet with their Senators and Representatives in recognition of the 75th Anniversary of EO 9066.

Seattle JACL will be chartering a bus to transport all interested attendees to and from the state capitol. We will be meeting at Blaine Memorial United Methodist Church, 3001 24th Ave. S. Seattle, WA 98144, at 8:00 a.m. The bus will depart promptly at 8:15, returning at around 3:00 p.m. in the afternoon. Joining the bus ride is not required.

This event is 100% free to attend. Snacks and lunch will be provided in Olympia.

This exhibit features poetry by Lawrence Matsuda and art by Roger Shimomura. They explore historic and contemporary issues of racism, discrimination and human rights. Free, RSVPs encouraged to [email protected]

The lecturers will discuss the conditions in Europe and America which led to the creation of concentration camps. The lecture features Dee Simon, the Baral Family Executive Director at the Holocaust Center for Humanity, Professor Lorraine Bannai from the Seattle University School of Law, and Dr. Tetsu Kashima of the University of Washington. The lecture is the first of a series of events connecting the Holocaust to Japanese American Incarceration.

The event was created through partnerships between the Holocaust Center for Humanity, the Nisei Veterans Committee, the Consulate General of Japan, and the Department of American Ethnic Studies of the University of Washington. This event, which honors the Day of Remembrance, is co-sponsored by the Seattle Japanese American Citizens League.

A reception will be held at 3:30 p.m. in the Walker-Ames Room on the second floor of Kane Hall following the Day of Remembrance event.

The Bainbridge Island Japanese American Exclusion Memorial is hosting a day of service to commemorate the 75th Anniversary of the signing of Executive Order 9066. Inspired by the unique legacy of a community that welcomed their Japanese American friends and neighbors home after World War II, the Memorial asks for volunteers to offer landscaping maintenance and improvements to the National Historic Site for the March 30 commemoration of the first forced removal of Japanese Americans on the West Coast during WWII. Please wear appropriate work clothing, gloves and bring your own gardening tools.

The Seattle Public Library will host a dialogue between Tom Ikeda, executive director of Densho, and Arsalan Bukhari, executive director of the Council of American-Islamic Relations (CAIR)-Washington State. Ikeda and Bukhari will discuss the connections between the incarceration of Japanese Americans and American Muslims as well as provide resources to prevent discrimination and harassment of American Muslims.

The event is hosted in partnership with Densho, CAIR-Washington State, and the ACLU of Washington State. Rep. Pramila Jayapal will be attending and making brief remarks. The Elliott Bay Book Co. will be selling books at the event. Admission is free, but seating is limited.

Reserved seating for Japanese Americans who were incarcerated or who served during World War II and their families is available. Email [email protected] to let them know you’re attending so that we can reserve space for you.

If you can’t attend in person, a live streaming of the event is available at Densho Facebook page beginning at 2:00 p.m. EST on February 19.

As a collaborative effort between many Japanese American organizations, a candlelight vigil will be held at Seattle University following the end of the Minidoka Pilgrimage’s Taiko Fundraiser. This candlelight vigil will be to show that as a community, Japanese Americans stand in solidarity with Muslim Americans and all those facing discrimination and targeting by our administration.

The Steve Griggs Ensemble will be performing free jazz, this time at the Japanese Community Cultural Center of Washington, to remember the signing of Executive Order 9066. This is a series of performances commissioned by a 4Culture Historic Site Specific grant and funded in part by the National Park Service Japanese American Confinement Sites grant and the Earshot Jazz Society of Seattle. This is the last of the performances after over two and a half years under the current funding.

“Why were Japanese Americans Incarcerated during World War II and Why Does it Matter Today?”
Monday, February 20
12:00 p.m. to 1:15 p.m.
Wheelock Student Center
Rasmussen Rotunda
University of Puget Sound, Tacoma
Free, Bring your own lunch.

The County will issue a proclamation parking the 75th anniversary of the issuance of Executive Order 9066, which forced the removal and incarceration of 120,000 Japanese Americans.

We invite the public to join us in Council Chambers to observe and solemnly reflect upon this day in our nation’s history.

The Seattle City Council and community leaders invite the public to observe as the City of Seattle honors and commemorates the 75th Anniversary of Executive Order 9066.

Join us at City Hall as we recognize and honor Japanese Americans incarcerated 75 years ago, committing to never again let fear drive our treatment of any community.

Read Thin Wood Walls by David Patneaude, then discuss the book with its author. Sample a Japanese treat and tour the mansion’s newly restored Japanese Bathhouse.

“Not to Be Forgotten: Legal Lessons of the Japanese Internment” essay contest
Deadline: April 16, 2017

Below is a calendar media airing to recognize the signing of Executive Order 9066.

KING5 TV: “Prisoners in Their Own Land”

Each night this week, anchor, Lori Matsukawa interviews local Japanese Americans who were incarcerated 75 years ago. More information and videos available on the King5 website.

George Takei’s Allegiance: The Broadway Musical On The Big Screen

A number of theaters will host screenings of Allegiance, a musical about the Japanese American Incarceration. This in an encore screening for the film as a commemoration for the Day of Remembrance. More information including screening locations and tickets is available at the Allegiance musical website.

Bill Radke talks with writer and Humanities Washington speaker Mayumi Tsutakawa, including her own personal connection to EO 9066 and how it can help educate about modern prejudices. Visit https://goo.gl/aWmM7L.

This calendar has been lightly edited from the print version