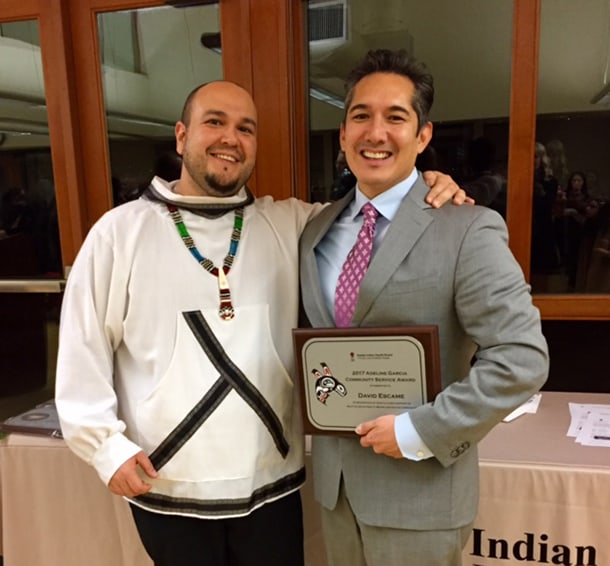 On February 10, Seattlite and API community member David Escame was one of three recipients of the Adeline Garcia Community Service Award from the Seattle Indian Health Board (SIHB).

Escame, who is Associate Vice President of Amerigroup Washington, has taken the initiative in bringing culturally appropriate health services to the native community.

“[Escame] has been active in approaching us to find out how [Amerigroup] can support our efforts,” Nerocker said.

Escame also accepted the Canoe Paddle Award on behalf of Amerigroup Washington, for their fiscal sponsorship of SIHB’s 2016 Spirit of Indigenous People Festival’s Pow Wow. Amerigroup Washington will sponsor 2 SIHB events in 2017: the Urban Indian Health Conference and the SpiritWalk—Walk for Native Health.

Since 2010, SIHB has held the annual Adeline Garcia Awards in early February to honor the birthday of one of their longstanding board members who dedicated their life to community service. Nerocker said that Garcia “was actually the founder of the American Indian Women’s Service League. She had been the pioneer, up until she passed away, for native rights, and particularly women’s rights.” The Garcia family attends the awards ceremony as a way of honoring their mother’s legacy.

In addition to David Escame, this year’s Adeline Garcia Award was awarded to Rita Stewart, from the State Legislative Office, and William Hall, a native community HIV advocate. The International Examiner caught up with Escame to talk about his community service work.

International Examiner: What is your role at Amerigroup?

David Escame: I’m the Associate Vice President of Amerigroup Washington. I’ve been with the company 13 years. I’m responsible for the team that is building relationships across Washington State, listening to the needs of our members and the communities we serve, and really building innovative systems for addressing health disparities.

IE: Thirteen years is a long time. What has kept you there for so long?

There’s something incredible about a company whose charge is to improve people’s lives. It’s not just me, though. We have a really tremendous group of dedicated people making this all happen.

IE: How does your work engage the community?

Escame: We’re always working on new, cutting edge, community-driven projects. We’re not just creating these solutions, but it’s really our community partners who are telling us what they need. The nonprofits we’re working with are amazing and mission driven. Here [in Seattle] I have real partnerships in government and real partnerships in nonprofit organizations.

IE: How does Amerigroup Washington serve the API community?

Escame: We try to make sure that every benefit that we offer covers as many people across ethnicities and races that we possibly can. We don’t specifically target a group, but we try to make sure that we’re incorporating and bringing things to the table that help their members throughout their lives. We really try to focus on underserved communities regardless of race.

We’re very aware of disparity and inequity. We have a diversity council. We try to serve on difference councils and committees. Personally, I serve on the [Asian Pacific Directors Coalition] and I’m aware of the types of issues that are coming up.

IE: What did receiving the Adeline Garcia Community Service Award from the Seattle Indian Health Board mean to you?

Escame: I’ve been acknowledged for other things, and I accept things on behalf of the company on a regular basis, but [the Adeline Garcia award] is a life highlight.

When I found out that I was the only [non-Native] member to be acknowledged, that made it even heavier. But you know, the work I do isn’t about me. The whole experience for me has been incredible. I completely understand that this honor is a responsibility, and I firmly believe that.

IE: How has your family inspired you to serve the community—particularly the API community?

Escame: My Lola was really involved in the Filipino community when we were kids. Both of my parents [Aurora Escame and Pio Escame] worked full time but made time to coach youth soccer. My parents are just both really gregarious, active, energetic people, and they just encouraged us to bring energy and passion to whatever work we were going to do. And I feel like I’m doing that.

IE: Why are you driven to community service?

Escame: In this role that I have it is a responsibility to use my title and my privilege to actually influence things. That’s the only way we’re going to change things.

My kids are growing up fast and they’re going to be cut loose in the world faster than I think. I want to make sure that it’s the most just and equitable world for them.