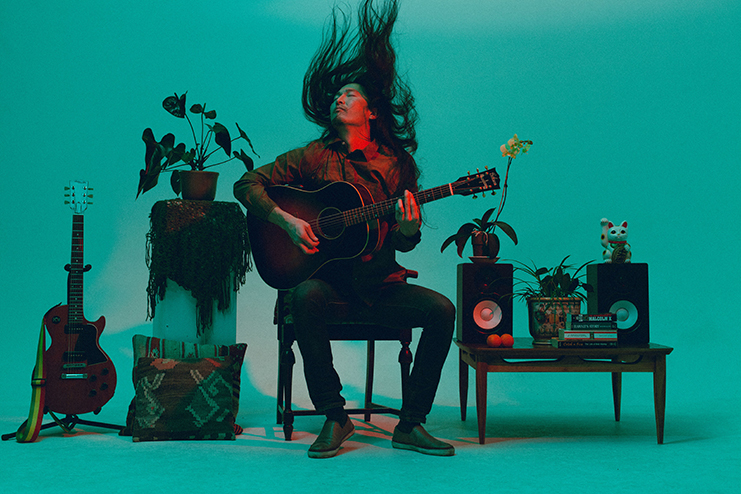 Each year since 2004, the Asian Hall of Fame has aimed to overcome anti-Asian bias, promote multiracial equity, and increase cross-cultural collaboration by celebrating outstanding Asian Pacific Americans, and this year, 22 new honorees will be inducted. One of those being honored this year is musician Daniel Pak.

For Pak, the honor is a surprise. “I received an email out of the blue from John Nicholas at Pinnacle Worldwide, which is a global artist management company,” Pak said. “I am humbled beyond words.”

Pak supports the Asian Hall of Fame mission to provide greater representation for Asian Americans. “Standing up to anti-Asian hate is important,” he said. “Being a role model for unity and solidarity is important.”

But that’s not all he’s excited about regarding the Induction Ceremony at the Sky View Observatory on November 18. “I get to perform a song, that I myself wrote, with Krist Noveselic (Nirvana) and Hiro Yamamoto (Soundgarden), with the incredible Ed Roth as music director of a top tier touring band,” Pak raved. “For me, performing at the top level is really important, because if I ever lost who I really am, a simple Hawai`i boy who really likes to write songs and sing them to bring more love, joy, and connection to the world, I would lose the very foundation on which all of my work sits on.”

Pak grew up in Hawaii where his father Gary Pak was an English professor at the University of Hawaii. “He’s always been a very talented jazz pianist, strongly influenced by the likes of Duke Ellington and Thelonious Monk, to name just a couple,” Pak remembered. “As a child, the act of just being at home listening to him play for hours, filling the house and pretty much the whole neighborhood with sound, was definitely one of the earliest memories of music for me.”

Professor Pak was also the younger Pak’s first music teacher. “By the age of eight or nine, through his teaching, I was playing Mozart and Bach,” Pak said. “He also gave me my first mixtape, on a TDK cassette. The first song on side A was the Ghostbusters theme, followed by Michael Jackson’s Thriller. On Side B, Santana’s Abraxas.”

With an upbringing on O`ahu, Pak brings love and aloha to his music here in Seattle. “When I got to University of Washington, I quickly became close to members of the Hawai`i Club, especially those who played instruments, and we’d find every opportunity to kanikapila late into the night and early into the morning,” Pak recalled. “Jamming nearly every day led to the formation of a couple early bands and we were able to get a lot of experience on stage, playing bars and house parties and even opening for our childhood heroes from the island music scene like Natural Vibrations and `Ekolu.”

These sentiments continued as he started a family. “In 2008, I got married to Amy Moline, now Amy Pak, and in 2009 we had our first son, Jahyoo,” Pak said. “Right before he was born, I wrote a song called Love You Better, pretty much a poem and a declaration of love and the commitment to being the best dad and partner I could be.”

One year later, in 2010, Pak co-founded Totem Star with Thaddeus Turner to provide a space and a record label for youth musicians to grow. “We were approached to do a summer music program for ten young men coming out of detention,” he said. “By building trust, producing music, and being positive adult role models for these young men, we were able to successfully complete 250 hours with all ten.”

But it wasn’t enough. “Checking in with them just two weeks later, we found that a third of them had been rebooked into detention, and once again, that feeling from deep within made itself perfectly clear,” Pak said. “We needed to ensure that young people had a safe and encouraging space to take creative risks, receive mentorship, and build community. That’s when Totem Star was born.”

Pak then split his time between Totem Star and his band Kore Ionz, until the Covid-19 pandemic, when he turned his focus toward solo work. “I wrote a few songs that I really like during the early part of the pandemic, when I was really working on myself as a songwriter,” he said. “I had the drums, guitar and bass amps, and microphones set up in the living room next to the upright piano, much to my family’s dismay, and would work on new lyrics, new chord voicings, improving my vocal range, improving my drumming, and pretty much playing for hours with loops.”

Over the past twelve years, Pak has created and performed music, as well as serving 5,000 youth at Totem Star. “Totem Star is about to break ground on a new 2,000-square-foot world-class recording studio which we will build on the second floor of historic landmark King Street Station in the heart of downtown Seattle, giving young recording artists access, education, and opportunity,” Pak beamed. “This partnership with the City of Seattle, The Cultural Space Agency, SKL Architects, Sellen Construction, and a growing family of supporters has brought us to a new conclusion, that we need to build more equitable arts and cultural space and keep artists in Seattle.”

Now, Totem Star youth artists are becoming young adults involved in the local arts community. “I’m so proud to see how artists have taken on leadership positions at Totem Star, becoming members of our youth advisory board, advocating to City Council on behalf of Totem Star and our ecosystem of arts and culture partners, and now being hired as staff,” Pak said. “In my mind there’s no better leaders to hand the keys to than the young people who have always been a part of this amazing musical family.”

All of these accomplishments hail back to those early days on O`ahu. “If I’ve learned anything over the last twenty years of my musical career, the path is never formulaic and has many branches, and all share a common root: music,” Pak said. “There are so many pillars in the work I do, and I’ve learned that building and supporting teams is one of my greatest skills, whether it be in a band, a youth program, a city music commission, a video production crew, and now, a real estate development company.”

Pak thanks King County Executive Dow Constantine for the nomination to Asian Hall of Fame. “I remember running into him at Alpental while snowboarding with family friend Thomas Goldstein, founder of the Service Board,” Pak recalled, “and Dow saying something like, ‘hey man, I nominated you for an award, hope that’s okay.’”

With past Asian Hall of Fame inductees like Bruce Lee, Brandon Lee, Kristi Yamaguchi, Steve Aoki, and George Tsutakawa, Pak feels this honor is much more than okay.